Precision Ag
Zeroing in on the right N rate

Research shows that soil type and weather conditions have the greatest impact on how much nitrogen grain corn needs. Taking into account these variables can help producers prevent under- or over-application of nitrogen. 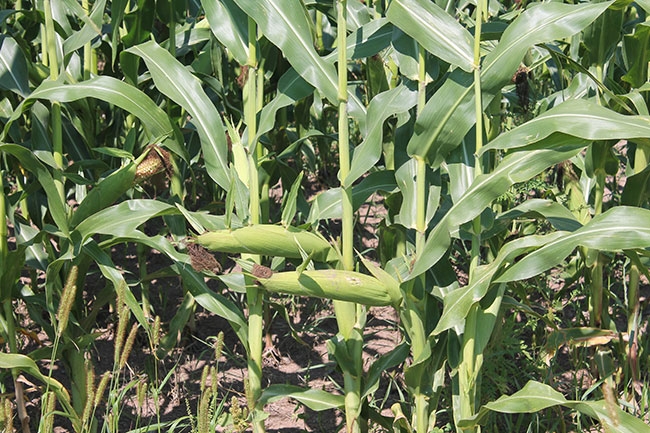 SCAN is a big improvement from tools that rely on a single factor This AAFC-developed precision ag tool helps get nitrogen just right.

Determining precisely how much nitrogen your crop requires can be tricky proposition for growers. Applying too little nitrogen can seriously impact crop performance and leave yield on the table, while excessive nitrogen fertilization not only represents an unnecessary farm expense but can have a harmful effect on the environment.

A new precision ag tool designed to take the guesswork out of assessing nitrogen needs for field corn is now available to growers in Ontario and Quebec. The fertilizer management app utilizes artificial intelligence (AI) to make recommendations on what rate of nitrogen will optimize profit per acre.

Nicos Keable-Vezina is the director of precision agriculture with Effigis Geo-Solutions, the Montreal-based company behind the tool, called FieldApex. The year 2018 is the first time FieldApex was widely available to growers in Quebec and Ontario, provinces in which many growers experienced particularly dry conditions this past summer. Keable-Vezina says as a result, growers and agronomists who followed the FieldApex recommendations generally applied less nitrogen (up to 30 per cent less in some cases) to their grain corn fields than they normally would and benefitted from fertilizer savings as a result.

At the heart of the FieldApex system is SCAN, a data-driven decision-making tool developed by researchers at Agriculture and Agri-Food Canada’s (AAFC) Saint-Jean-sur-Richelieu Research and Development Centre in Quebec, in co-operation with a number of Canadian universities. In June 2017, Effigis signed a licensing agreement with AAFC to commercialize the technology and a new web-based platform to integrate SCAN was subsequently built.

Nicolas Tremblay, an AAFC research scientist specializing in crop management, was the lead architect for SCAN, which stands for Soil, Crop, Atmosphere and Nitrogen. Tremblay believes decision-support tools like SCAN help growers save money by reducing their fertilizer inputs and achieve higher yields by adding more nitrogen when it is needed.

“What we’ve found is that when you maximize profits with nitrogen, you also reduce your impact on the environment,” Tremblay says. “When that optimal rate is achieved from an economic standpoint, this is the point where the crop extracts all of the nitrogen that it needs, and no extra nitrogen is left behind.”

Extensive research by Tremblay and his team into nitrogen use in grain corn production illustrated how a wide range of factors influence how the nutrient is utilized, with weather conditions and soil texture having the greatest impact.

This work, which was based on research findings from Quebec, Ontario and other locations around North America, led to the creation of an AI algorithm that calculates economically optimal nitrogen rates based on these factors and the interplay between them.

such as yield goals

In addition to weather and soil texture, SCAN takes into account a field’s cropping history and the soil’s organic matter content, as well as economic considerations such as historical yields and the ratio between the cost of fertilizer and the anticipated price of corn.

Over the course of a three-year testing period in commercial corn fields, SCAN produced average gains of $25 to $49 per hectare, depending on the year. These benefits were obtained through savings on fertilizer or increased yield, according to AAFC.

Tremblay says a benefit to SCAN is the multi-faceted approach to assess nitrogen needs in field corn.

“When you have a tool that uses just one parameter to assess such a complex problem of determining the optimum nitrogen rate, it’s certainly not encompassing everything you need to assess. The more complex it is, the more likely it is to be successful,” he says.

Tremblay singles out weather – or more specifically precipitation – as the most important factor related to nitrogen needs in field corn. “The more rainfall you get, the greater potential nitrogen loss you’ll have. Rainfall is also a primary driver for yield production, so it has a lot of impact on nitrogen requirements,” he says.

According to Effigis, SCAN is directly linked to weather information that provides both historical rainfall data and short-term future forecasts during the nitrogen application period.

Tremblay stresses soil texture is also very important, because some soil types are better at retaining nitrogen while others are prone to nitrogen losses. Because soil texture is relatively easy to measure, “it’s a parameter that is easily implemented in sophisticated decision-support systems.”

Effigis Geo-Solutions plans to introduce FieldApex to growers in six to eight states in the U.S. Corn Belt on a trial basis next year, according to Keable-Vezina.

In the meantime, the company continues upgrade the FieldApex platform and is planning to roll out a number of new features. This includes nitrogen variable-rate prescription maps that incorporate soil texture information derived from satellite imagery, a feature that will be available to Quebec and Ontario growers next year.

Keable-Vezina says Effigis Geo-Solutions is working on establishing agreements for integrating FieldApex with major precision ag platforms. There is also research underway into adapting the SCAN decision-making model to other crops like potatoes.