With declining phosphorus (P) fertility levels across the Prairies, growers may be leaving more yield in the field than they think. Research has shown that low P fertility soils cannot reach optimum yield, even with a high fertilizer rate. And the move to a tight canola-wheat rotation, the most common on the Prairies now, is creating challenges in designing an adequate P fertility program.

Phosphorus is well known for promoting early season root development, tillering, early flowering, uniform ripening and seed production in crops. In longer rotations with cereals, P soil fertility could be maintained at optimum levels with annual applications of fertilizer P, as cereals have a lower P need and higher tolerance for seed-placed P than oilseeds.

“The safe amount of seed-placed phosphate is enough to supply a wheat crop and keep soil P in balance,” says Agriculture and Agri-Food Canada research scientist Cindy Grant, at Brandon, Manitoba. “However, a 40 bu/ac canola crop will remove 40 lb of P2O5 and the safe seed-row rate is only 20 lb, so you are running a 20 lb per acre deficit if you are only applying seed-placed P. And canola also needs another 58 lb/ac of P2O5 for growth, so it is a very heavy user of P.”

That deficit has Grant and other soil fertility specialists concerned. With more canola and other oilseeds such as soybeans and camelina being grown on the Prairies, they are starting to see that P fertility is gradually being drawn down in the soil.

Historically, the P balance on Manitoba soils was fairly good. Fertilizer P applications had been relatively balanced with P removal in the seed. However, recent trends show this may be changing, perhaps because of the shift to more oilseeds in the rotation, which can mean lower P fertilizer applications. Corn acres are also going up in Manitoba, and corn is a heavy user of P.

“As farmers grow more crops that deplete P, this could be leading to a deficiency in soil fertility,” says Grant.

The risk of allowing soils to become depleted of P fertility is that even with a high P fertilizer rate, optimum yield cannot be achieved compared to a soil with moderate soil test P levels. Two research projects illustrate the need to maintain soil P fertility at critical levels. 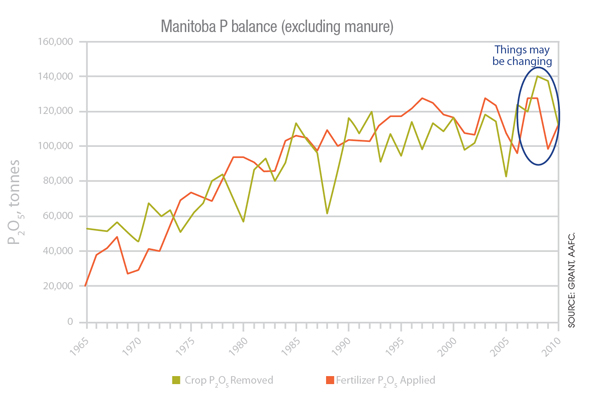 The first project was conducted by the University of Minnesota from 2005 through 2008 on long-term P studies. The soils had two fertility levels as determined by soil tests using the Bray method: 7 ppm (low) and 25 ppm (high). (Note the Bray soil test levels do not directly correlate to the Olsen P and modified Kelowna soil test levels. The low and high ratings are the critical factors, not the actual ppm numbers.) The low site had no P or K applied in the previous eight cropping years.

The results showed that even application rates of 50 lb of P2O5 per acre on the low testing site could not achieve the yields of the high testing site, even if no P fertilizer was applied on the high fertility site.

“For both corn and soybean, the low P soils couldn’t reach the yield of the high P soils,” explains professor Gyles Randall at the University of Minnesota. “That was surprising. It shows that you can’t mine your soils of P and expect to compensate with fertilizer P applications.”

Randall says the economic return on the high soil test P soil was about $111 per acre more for both corn and soybean, compared to the lower test P soil. “We learned that high and profitable corn and soybean yields could not be produced on low P-testing soils, even though the P rate used for corn on the low fertility site was greater than the University of Minnesota’s recommendation,” says Randall.

Grant cites a University of Saskatchewan study that produced the same results in wheat. Conducted by Wager, Stewart and Henry from 1979 to 1984, the study compared a single large broadcast application at varying rates to smaller annual seed-placed P applications. The initial broadcast P applications ranged from zero to 180 kg P2O5 per hectare (160 lb/ac). In each of the five years, annual seed-placed P2O5 ranged from zero to 44 lb of P2O5 per acre. 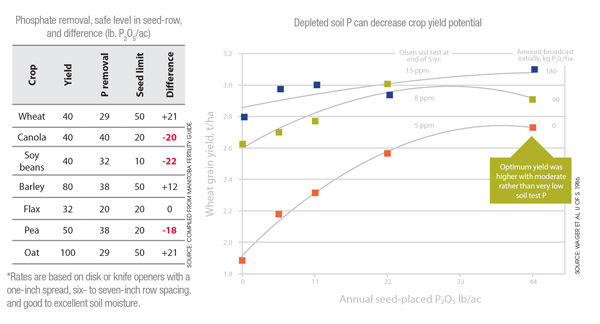 “Optimum yield was higher with moderate rather than very low soil test P levels. It shows that if you deplete soils too much, you can’t reach high yields,” explains Grant.

Side-banding allows more P to be placed safely while allowing efficient uptake by sensitive crops. Extra P can also be added in crops in the rotation that tolerate seed-placed P. For example, applying 40 lb of P2O5 to wheat even though it may only need a 30 lb maintenance application. In this way, soil P can be built up gradually. Manure at N application rates can also provide a P benefit for several years, as N rates sufficient for crop growth will provide much more P than needed by the crop.

“Growers should aim to maintain reasonable soil P levels for optimum yield potential, and to provide a buffer when relying on seed-placed P in sensitive crops,” says Grant. “Soil testing provides a good auditing tool for P balance over time. 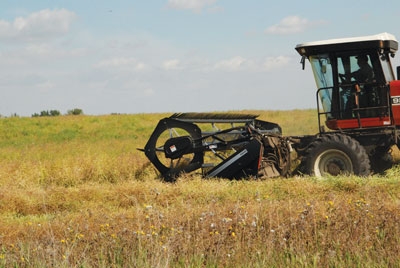 Tight canola rotations could be depleting soil P. With declining phosphorus (P) fertility levels across the Prairies
Print this page