With Western Canadian farmers getting prepared to market their future wheat crops without a Canadian Wheat Board as it presently exists, a review of the world wheat situation is in order.

On a world scale, wheat is the second most produced crop in the world (approximately 680 million metric tonnes produced annually), following only world corn production (820 MMT).  However, unlike corn, it is primarily used for human consumption.  The four major types of wheat (hard red, soft red, white and durum wheat) are harvested every month somewhere in the world.

“Because of this on-going world production and consumption, it is important to be aware globally of what is happening in the various major wheat production areas in the world to enable producers to capture better returns for the wheat grown,” says David Wong, market specialist with Alberta Agriculture and Rural Development. “But, it isn’t just where the wheat is grown, it’s also if the exporting countries have a good crop or not.”

The top two wheat producing countries in the world are China and India. These countries also have the two largest populations in the world, and neither country exports any of the wheat that they produce.  However, market watchers must keep an eye on their consumption levels, and any signs of production shortfalls due primarily to adverse weather conditions (drought, monsoons).  The U.S. is considered the number one exporter of wheat worldwide.  Although U.S. production is slightly below typical Russian production, it has a smaller population, and is therefore the bigger player on the world export market.  As such, the U.S. plays a more dominating role in world wheat pricing.

Following the U.S., France is the number 2 country in world wheat exported.  The EU is the major player in world wheat trade. The EU has 27 countries as part of their union, and the main exporters from the EU are France, Germany and the United Kingdom.

“Canada, which grows the majority of the world’s high protein wheat, ranks sixth in world wheat production, but holds down third spot on the world wheat exporting scene,” adds Wong.

The table below shows how much wheat is produced in the world’s countries, and how they rank as a wheat exporting nation.

With the world watching the various wheat production regions of the world, as well as the demand by various countries for wheat, wheat pricing is typically based off the U.S. wheat futures markets, namely:

The Winnipeg Commodity Exchange is offering both hard red spring wheat and durum wheat contracts. It is expected that these contracts will be used by buyers in pricing wheat in Western Canada.

“The marketing of wheat in the Canadian prairies will change this year, and the more producers know about wheat production and demand worldwide, the more they will be able to make better wheat marketing decisions,” says Wong. 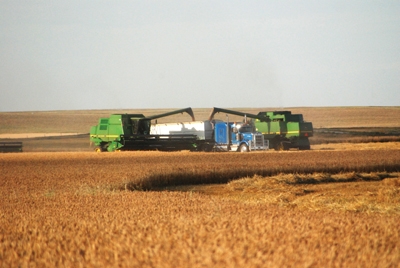 Knowing wheat production and demand worldwide will aid in wheat marketing decisions. With Western Canadian farmers getting prepared to market their future wheat crops without a Canadian Wheat Board as it presently exists