Wireworm populations may have wobbled in recent years, but they haven’t fallen yet. That’s the good news and bad news from research done by Agriculture and Agri-Food (AAFC) research scientist Dr. Bob Vernon at Agassiz, British Columbia.

Vernon is one of Canada’s leading researchers looking at wireworms, and says wireworm control has become much more difficult since the removal of lindane (Vitavax) and most other effective insecticides for control of wireworms in Canada.
“In the past, lindane applied to cereal crops provided good stand protection and killed the larvae. Growers could use it every three or four years and keep the populations under control, but it has been gone since 2004, and wireworms are becoming more of a problem,” says Vernon.

Wireworms are the larval stage of several species of beetles, known as click beetles. There are about 30 pest species in Canada, and the problem begins when click beetles emerge from hibernation in the spring and lay eggs in preferred crops, such as pasture or cereal crops. The eggs hatch in early- to mid-summer into “neonate” wireworms, which are very small (less than four millimetres). One of the things that make wireworms different from most other pests is that they can live for several years in soil – from two to five years depending on the species.

Vernon terms wireworms present in soil for more than one year as “resident” wireworms – the stage when they are typically large enough to start causing damage. In the last year of their life cycle, the wireworms pupate, usually in late summer, and adults emerge from soil the following spring. Both the neonate and resident larvae feed on seeds and later on roots. Depending on how many years a field is in pasture or cereal crops (the egg-laying years), there can be several years of larval populations present in the soil at any one time. To complicate things further, there can also be several species of wireworms present in the same field.

Populations in the soil may be greater than three million per hectare. The longer a field is in cereals or pasture, the higher the wireworm population. Although wireworms attack most crops, cereals and grasses are their preferred feeding hosts.

During other cropping years, wireworms in soil are attracted to most types of seed (i.e., cereals, forages, vegetables, potatoes, etc.) by the carbon dioxide given off during germination/respiration. One wireworm can easily consume two or more cereal crop seeds.

Vernon has been surveying wireworm populations since 2004 to identify the most common species in Western Canada. In surveys, Hypnoides bicolor and Selatosomus destructor have been found to be the most common on non-irrigated fields on the Prairies, while Limonius californicus prefers irrigated fields. Hypnoides is most common on the Prairies at about 70 percent of submitted samples, while Selatosomus makes up about 13 percent, except in Manitoba where it was uncommon.

The two main species are relatively different in size, with Hypnoides about one centimetre long and Selatosomus up to 2.5 centimetres long. According to Vernon, size does matter because larger species can eat more than the smaller ones, which is important in crops such as cereals.

“Knowing the species you have is also important, since we have found that various species can respond differently to some of the newer insecticides,” says Vernon. “Most of our work to date with insecticides has been done on different species found in B.C., although we have done some work in the lab with Selatosomus destructor and Limonius californicus.”

Currently registered insecticides set only on stun
Since 2004, growers in Canada have lost some of their most effective treatments for the control of wireworms. Lindane, previously mentioned as a cereal and corn seed treatment, was removed in 2004. Other effective insecticides, used primarily in potato, including Temik, Dyfonate, Furadan and Counter (corn), are no longer available. Chlorpyrifos is now registered for use in potatoes in Canada, but is only used in British Columbia due to there being no minimum residue level (MRL) on potatoes going to the United States. Thimet 15G, originally scheduled for phase-out for use on potatoes in 2012, is now being phased out in 2015.

With lindane, research by Vernon showed that 65 to 70 percent of the resident larvae died during the growing season in wheat plantings. Lindane also killed more than 85 percent of new neonate larvae occurring later in the wheat-growing season, effectively knocking back wireworm populations for three years.

Research to replace lindane has been ongoing since 1996, and Vernon has looked at three groups of insecticides for wireworm control: Group 4A neonicotinoids include three actives that are registered for use in Western Canada as seed treatments for wireworm control – clothianidin (Poncho), thiamethoxam (Cruiser) and imidacloprid (Raxil WW).

“Killing neonates is very important when trying to control populations,” explains Vernon. Unfortunately with the neonicotinoids, Vernon found, they do not actually kill many of the resident larvae. Rather, the larvae become moribund, which is like being intoxicated, and often appear to be asleep. This allows the crop to establish and grow, but most wireworms recover fully by mid-summer. To make matters worse, in early- to mid-summer when the new neonate wireworms are hatched, they survive the treatment as well.

“You get great crop establishment and yield, but little reduction in resident wireworms and no reduction of neonates. This was the same for all neonicotinoids tested,” says Vernon. “The wireworms are there next year, and this could be one of the reasons we are seeing an increase in wireworm populations.”

The effectiveness of a neonicotinoid seed treatment can also be reduced if germination is delayed, since the level of insecticide activity drops over time.

Other candidate insecticides include tefluthrin, bifenthrin and lambda cyalothrin in the Group 3A synthetic pyrethroid family, and fipronil in the phenyl pyrazole family.

Vernon’s research found that synthetic pyrethroids applied as wheat seed treatments were all repulsive but not lethal to resident or neonate wireworms. Once again, while wireworms are repelled from the wheat seed, the crop can grow unharmed, and stand and yield are maintained. Some of these pyrethroids, however, have proven to be quite effective in reducing daughter tuber damage in potatoes.

Fipronil shows great promise. In several research studies, fipronil rapidly killed resident and neonate wireworms with almost complete control during the spring and summer feeding periods. Similar to lindane, fipronil has the potential to provide multi-year protection from wireworms. Fipronil is registered in the United States as Regent for the control of wireworm in corn and sunflower, and as an in-furrow at-planting spray application in potato.

Vernon has found that fipronil can kill wireworms at very low rates relative to lindane or the neonicotinoids registered as cereal seed treatments. However, although wireworms will eventually die at these low rates, some feeding and crop loss can still occur. To get over this challenge, Vernon assessed a blend of thiamethoxam and fipronil at a lower rate, and found that this combination provided both excellent wheat stand and kill of resident and neonate wireworms. 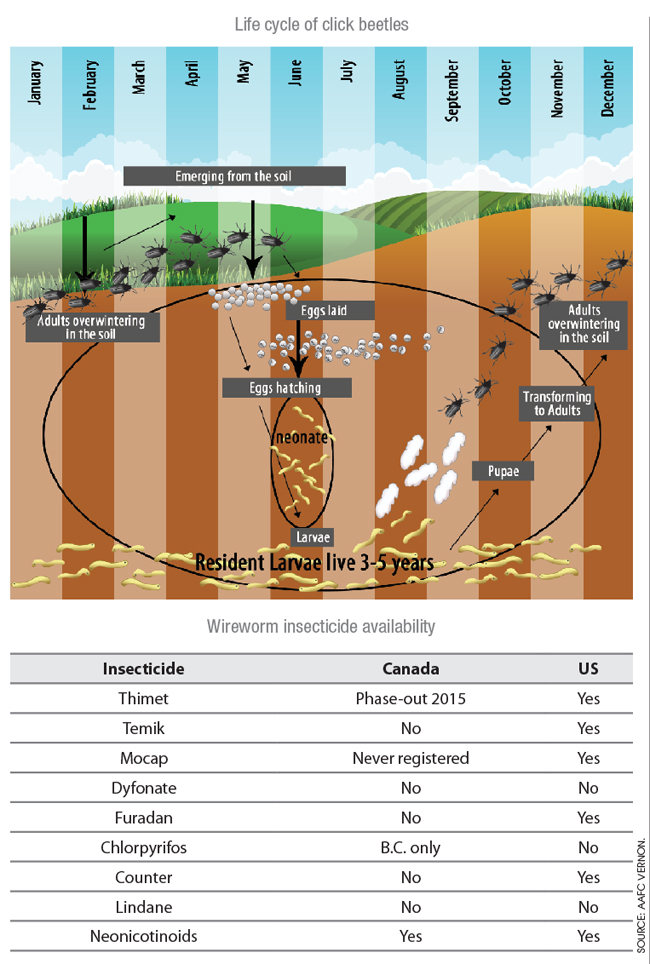 “This approach was proven over three years of field trials, but it will require registration of fipronil in Canada,” says Vernon. The low rates of both the neonicotinoid and fipronil on wheat seed would be cost effective and provide the most environmentally benign approach to wireworm control ever developed.

In the meantime, growers can rely on Cruiser Maxx, Raxil WW and Poncho to provide protection against wireworms.

These products all quickly intoxicate wireworms so the crop can establish and grow, and yield benefits are proven. They work best in soil temperatures favouring rapid germination and high wireworm activity, although there isn’t likely to be a reduction in wireworm populations from year to year. Other agronomic practices that promote vigorous, rapid crop growth and a healthy stand establishment – such as shallow seeding into warm, moist soil, adequate soil fertility and high seeding rates – will also help the crop overcome wireworm pressure. And, there is always the hope of a new, effective seed treatment being registered in Canada.

Selatosomus destructor is up to 2.5 centimetres in length Wireworm populations may have wobbled in recent years