In the open market era of wheat marketing, farmers have been assessing their cropping options. With marketing freedom, wheat – and especially winter wheat – is getting a second look. And so it should be. Crop planning estimates put winter wheat at the top of cereal profitability, and at or near the top for all crops.

“Experienced winter wheat growers will tell you that in most years, winter wheat provides the highest net returns of all cereals and better than many other crops. That surprises a lot of people,” says Paul Thoroughgood, regional agronomist with Ducks Unlimited at Moose Jaw, Saskatchewan. “I am also a grower, and it has certainly been my experience that winter wheat is usually near the top for profitability.”

Thoroughgood’s observations are supported by the Manitoba and Saskatchewan crop planning guides for 2013. The guides provide an economic evaluation of inputs and estimated yields required to cover all costs including labour, investment and depreciation before management costs. The guides are available online at the provincial websites and are customizable for your own figures.

“If we saw a crop like flax with income projections similar to winter wheat, I think we would have seen a huge amount of excitement and an acreage shift to flax, but there is still some hesitancy to commit to growing winter wheat,” says Thoroughgood.

John Duvenaud says now that wheat can be sold on the open market, farmers need to assess their grain markets above and beyond traditional Canada Western Red Spring (CWRS) varieties. In a Ducks Unlimited Winter Wheat Advisor newsletter, he says that “growing the best quality wheat in the world has certainly been morally satisfying but it is probably not the way to maximize your wheat profits.” Duvenaud is the publisher of the Wild Oats Grain Market Advisory, a newsletter covering Prairie crop marketing.

“Hard Red Spring wheat was overproduced to the extent that the CWB routinely overdelivered on quality specs. In the CWB monopoly world, that simply meant that the pool was somewhat diluted for every farmer. In the post monopoly world that will mean direct competition, mainly using price, to determine whose wheat hits those high-paying users. It is safe to say that any huge quality premiums are unlikely,” explains Duvenaud.

Duvenaud still believes there are substantial opportunities for growers who want to move to higher yielding and lower quality wheat such as winter wheat or CPS Red or White. He says these mid-protein wheats can be milled but most will be used as feed. His ideal cropping mixture for 2013 was 50 percent winter wheat, 25 percent CPS red and 25 percent spring. The price fundamentals have changed a bit with corn prices moving lower, but Duvenaud says that farmers should take some time to assess winter wheat profitability to determine if they should be planting more acres in the fall of 2013.
Thoroughgood says that generally, if winter wheat is trading at a discount of less than10 to 15 percent to CWRS, winter wheat will often be more profitable. “Winter wheat wins on net returns because of its higher yield,” he says.

Now that wheat has been removed from the central selling desk of the CWB, farmers also have much more freedom in marketing their winter wheat crops. They can still market through a pooled return or other contracts with the CWB, and the other grain companies also offer many different types of contracting options. Wheat can also be moved directly into the feedlot and ethanol markets.

“To me, it makes a lot of sense to look at moving some of your CWRS acres over to winter wheat and CPS,” says
Thoroughgood. 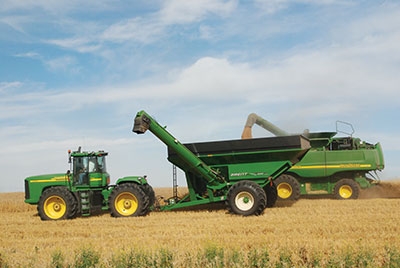 Projected winter wheat profitability puts it at or near the top of cropping choices. In the open market era of wheat marketing