In an effort to find the optimum row spacing and seeding rate for no-till canola, researchers at Agriculture and Agri-Food Canada (AAFC) collaborated on a multi-year research project. While the results don’t necessarily nail down the sweet spot, the study does provide guidance for growers wishing to use wider row spacing to improve their bottom line.

“What we found was that yield declined linearly when you went from nine-inch row spacing to 24-inch row spacing. Even under optimum conditions of good soil fertility, very good weed management, sometimes even hand weeding of plots, good flea beetle control and little disease pressure, we saw declining yields with wider row spacing,” says Randy Kutcher, with AAFC at Melfort, Sask., when he conducted the trials (Kutcher is now with the Crop Development Centre at the University of Saskatchewan). Declining yields were especially the case with the 18- and 24-inch row spacing. Differences between the nine- and 12-inch row spacings were more limited.

Kutcher recently dug back into the data because some farmers are now looking at precision planting of canola with wider row spacing and low seeding rates. The research was conducted in the early 2000s, but published only recently in the Canadian Journal of Plant Science.

Kutcher says most of the row spacing research studies, and many studies on seeding rates, were done with open-pollinated canola prior to the wide spread adoption of no-till. These older studies found that highest yields were achieved at row spacings of three inches to six inches and seeding rates of 2.7 to six pounds per acre. However, with the move to no-till and the use of wider row spacing to facilitate improved trash clearance and reduced machinery costs, there was a lack of current research to guide farmers.

The research was conducted at Melfort, Sask., and Lacombe, Alta., over a three-year period from 2002 to 2004. Three seeding rates of 2.9, 5.7 and 8.5 pounds per acre were used on row spacing of nine, 12, 18 and 24 inches. Seed treatment for control of seedling disease and flea beetles was applied. Preseed herbicides were applied, and hand weeding took place at Lacombe in 2003. Fertilizer rates were established by soil testing, and fertilizer was side-banded. A ConservaPak air drill with shank openers was used to seed the plots at both locations. Precipitation was below the long-term means both annually and during the growing season, except at Lacombe in 2004, where there was slightly higher rainfall during the growing season.

“Under our ideal conditions, the plant stands never fell below 40 plants per square metre, so it wasn’t really a surprise that yields didn’t decline with lower seeding rates. We have seen that in other research as well,” says Kutcher. “It shows canola is plastic, but there are so many other factors you need to consider if you start cutting seeding rates. It can really open the canopy up to weeds, and with concerns regarding glyphosate resistance, we really don’t want to over-apply herbicides.”

“These results are similar to what Guy Lafond at Indian Head used to say, that there wasn’t much of a yield penalty up to 12-inch row spacing, but after that, yield tended to drop off,” says Kutcher.

Putting the results to practical use, Kutcher cautions farmers to be wary of cutting seeding rates to reduce input costs, as the lower plant stands have increased risk and puts selection pressure on herbicides. For row spacing, little yield penalty was evident up to 12-inch row spacing, but as row spacing increased to 24 inches, greater yield reductions were observed. 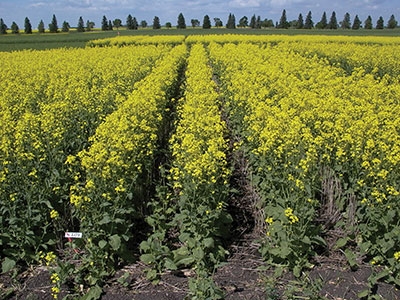 24-inch row spacing had 11 per cent lower yield. In an effort to find the optimum row spacing and seeding rate for no-till canola