Features AG Tech
Cultivating Innovation: Who, what and how? Current uses of ag tech 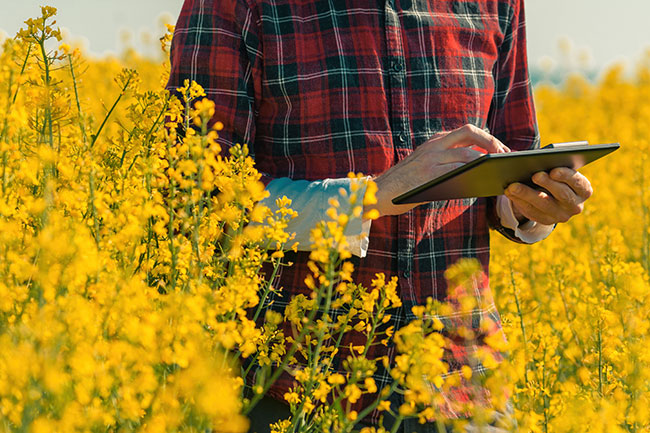 In early 2022, Top Crop Manager conducted a survey on agricultural technology, asking our readers to answer questions focused on ag tech, how they use it and what they see for the future of farming. Between Jan. 14 and Feb. 1, 1,218 individuals responded to the 2022 Agricultural Tech (Ag Tech) Survey. To put the resulting survey highlights in context, it is important to know more about the respondents.

Most of the people who responded to the survey are at least 55 years old: 36 per cent are between 55 and 64 years old, and 37 per cent are 65 years of age or older, for a cumulative 73 per cent of respondents. The next most populous age group was the 45- to 54-year-old bracket at 15 per cent, while the 35- to 44-year-old group made up eight per cent and the 35 years and younger group represented four per cent of the total.

The grand majority of respondents, at 79 per cent, state their primary occupation is farm owner, manager or partner. Agronomists or consultants were the next best represented group at seven per cent, followed by inputs suppliers, distributors or retailers and retirees, both at four per cent. The remaining six per cent consists of people working in research and development, government extension, students, farm employees, and people whose occupation fell outside of the available options. 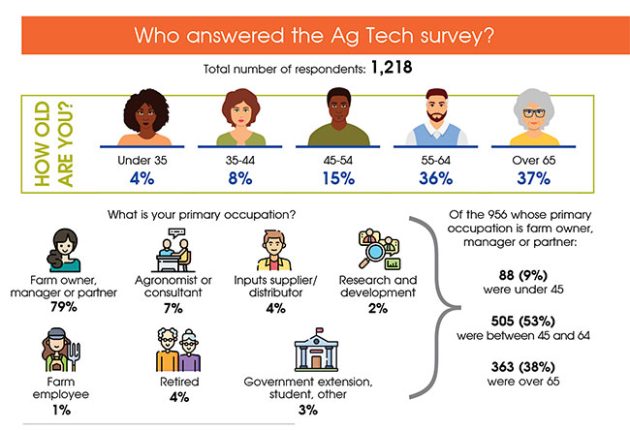 Of the 79 per cent whose primary occupation is farm owner, manager or partner, nine per cent were 45 years old or younger, 53 per cent were between 45 and 64 years of age, and 38 per cent were 65 years or older.

As for involvement in decisions regarding purchasing and technology for their farm operation or business, most respondents – 56 per cent – are the primary decision-maker. Twenty-five per cent are heavily involved in these decisions, 11 per cent are only somewhat involved, and eight per cent are not involved at all (or possibly don’t work directly with a farm operation).

The breakdown by age of those in the primary decision-maker category had nine per cent at 45 years or younger, 58 per cent in the bracket between 45 and 65 years old, and 33 per cent were 65 years old or more.

As for where farm owners, managers or partners fell regarding their involvement with technology and purchasing decisions, 67 per cent are their operation’s primary decision-maker and 26 per cent are heavily involved, whereas six per cent were somewhat involved and only one per cent indicated they were not involved in these decisions at all.

Internet and broadband cellular data access can be a major influence on farming practices regarding ag tech, so the survey also polled respondents on whether they had reliable access to at least one. At 91 per cent, the overwhelming majority said they did have reliable access, while the remaining nine per cent said they did not.