Features
Who owns the farm and who will own the farm? 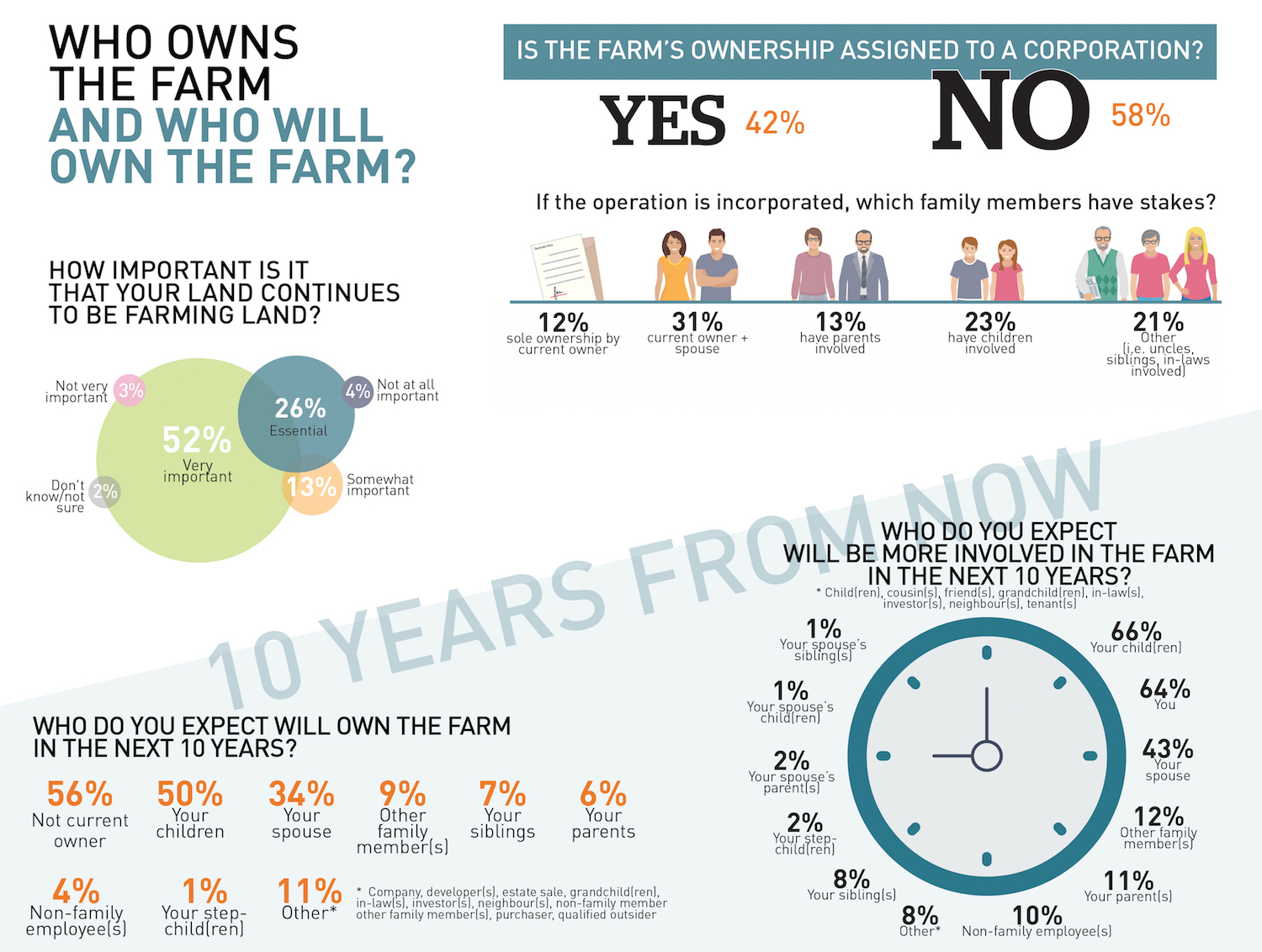 One of the key elements of transition planning is the transfer of ownership. The Ag Succession Survey looked at who currently owns the farm and who will own the farm in the next decade.

For a majority of survey respondents – around 58 per cent – the farm’s ownership was not assigned to a corporation. Out of the 42 per cent that had an incorporated operation, most of the corporation’s stakes were held by family members.

The most common result when it came to an incorporated operation was to have the stakes split among the current owner and spouse. However, to a lesser extent, other survey respondents had corporations where all family members had stakes, or their parents and their children were also involved. For 12 per cent of survey respondents with an incorporated operation, the current owner solely owned the corporation. All in all, a majority of operations were family owned and incorporating an operation was still the less popular option by 16 per cent.

In the future the 56 per cent of survey respondents who are not currently the farm owner expect to own the farm in the coming decade. In 2013, Statistics Canada identified 33,000 self-employed farmers as impending retirees, and suggested upwards of $50 billion in farm assets will be transferred over the next 10 years. The 56 per cent of survey respondents expecting to come into ownership represent the large patterns of transition that was estimated several years ago.

The second highest result was children: 50 per cent of non-farm owners expect that their children will own the farm in the next years. The third most popular result was a spouse, with 34 per cent of respondents selecting the option. This answer could account for those who married into a farm family where their spouse is taking over a family operation. Other responses as to who will own the farm included: a company, developer(s), estate sale, investor(s), neighbour(s), purchaser and qualified outsider.

The expectation of ownership in the next 10 years doesn’t drastically differ from current ownership patterns. Most farms expect to switch over to a family member.

Before the topic of ownership, most survey respondents expect that certain family members will become more involved in the farm in the the next 10 years. Getting more involved with the operation is key for incoming successors.

Outside of the family, around 10 per cent of respondents expect non-family employees to become more involved in their operation. This was slightly larger than the eight per cent that expected their siblings to be more involved. Cousins, friends, investors, neighbours and tenants made up the “other” responses and speak to the creative composition of operations.


Related
Who answered the Ag Succession Survey?
The state of succession
Funding the future: Discussing retirement in transition planning
Cultivating Innovation: Who, what and how? Current uses of ag tech