Features Insect Pests
Where have the weevils gone?

Cold winter weather is good for something. 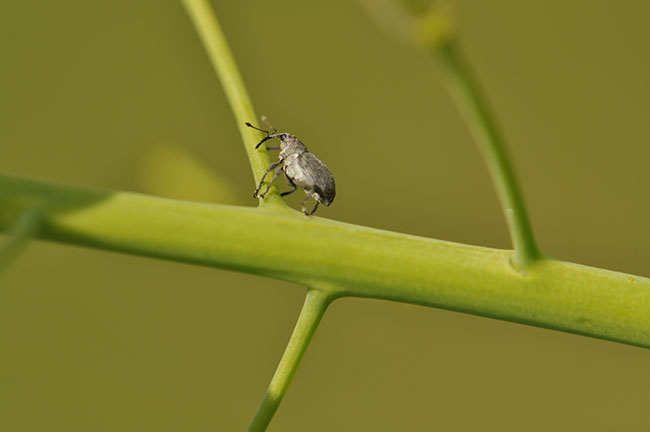 Pea leaf weevil and cabbage seedpod weevil were missing in action in 2019 and 2020 on some parts of the Prairies. One reason was likely cold winter weather. Does that bode well for 2021?

“In our modelling, winter soil temperatures seem to have a tight relationship with overwinter survival, and cold temperatures can drive the populations down,” says James Tansey, provincial insect/pest management specialist with the Saskatchewan Ministry of Agriculture in Regina. Both weevils overwinter as adults and their survival depends on how cold it gets under litter and debris in treed areas, ditches, field margins, and perennial legume crops. Winters with low snow cover and a deep freeze can result in the death of adult weevils.

For cabbage seedpod weevil, research by Hector Cárcamo with Agriculture and Agri-Food Canada found that the super-cooling temperature is -7 C. He also found that its survival over eight weeks decreased significantly at -5 C relative to 5 C.

Asha Wijerathna, a graduate student of the Cárcamo and Maya Evenden labs at the University of Alberta has also established the super-cooling temperature for pea leaf weevil at -12 C.

Tansey says that the lack of snow and cold winter temperatures of 2018-2019 and 2019-2020 likely contributed to a decline in both weevil populations in Saskatchewan during the 2019 and 2020 growing seasons. He uses Environment Canada weather station data, and models the daily mean, minimum and maximum daily temperatures under the snow in January and February, based on a model developed by Katri Rankinen at the Finnish Environment Institute in Helsinki, Finland.

“We use modelling to estimate the temperature under the snow because soil temperature isn’t broadly measured by Environment Canada. We have had good success in correlating the modelled temperatures with overwinter survival of the weevils,” Tansey says. 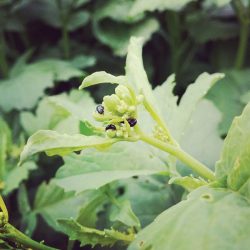 The pea leaf weevil first showed up in southern Alberta in 1997, and Saskatchewan in 2007. It had been moving east and north in both provinces, and as recently as 2017 there were some fairly heavy infestations across southern Alberta and southern Saskatchewan as well as central Alberta.  But in 2019 and 2020, pea leaf weevil populations had dropped dramatically. In Alberta, areas around Edmonton and Lethbridge still had relatively high numbers, but the rest of the province saw a decline in populations.

Cabbage seedpod weevil followed a similar trend. This insect pest has typically been a major problem in southern Alberta, and had spread into much of southern Saskatchewan. However, surveys in 2018 and 2019 show that while the distribution is still widespread across the southern part of the two provinces, the numbers are lower but with typical hot spots in southern Alberta around Lethbridge. In Saskatchewan, Tansey says the 2020 survey map has not been completed, but that a preliminary look at the data shows that the population seems to be diminishing in much of the province, but with a few heavier infestations in southwest Saskatchewan.

Looking forward to the 2021 growing season, Tansey isn’t sure how the February 2021 cold snap will affect the populations. With some snow on the ground insulating the weevils, the populations may not have hit their super-cooling temperatures.

“There may have been some insulating value from the snow, so we’ll have to see how the populations fared this winter,” Tansey says.

Canola growers should scout for the cabbage seedpod weevil as the canola crop begins to flower. The action threshold for applying insecticides is 25 to 40 weevils in 10 sweeps during canola flowering, varying depending on canola price and cost of control. Insecticide application targets adults when crops are in 10 to 20 per cent flower (when 70 per cent of plants have at least three to 10 open flowers) to avoid eggs being laid in newly formed pods. 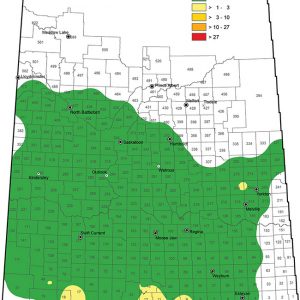 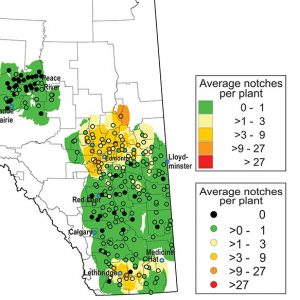 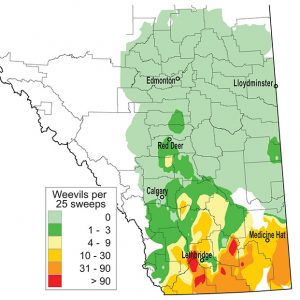 A couple more insects to watch for
Tansey says agronomists and growers should keep an eye out for a couple new insect pest threats.  The spotted winged Drosophila is a fruit fly that was widespread in Saskatchewan in 2019, and low levels were found in southern Manitoba in 2020. The fly attacks many fruit crops and can be quite damaging.

“In 2020, we didn’t have see an occurrence of the fly in Saskatchewan, so we are watching to see if it is endemic here, or if it is introduced on contaminated fruit from other areas,” Tansey says.

The other insect pests of concern are the pollen beetles (Brassicogethes aeneus and B. viridescens), which attack canola and oilseed mustard. They are not known to be established in Western Canada, but are present in Nova Scotia, PEI and Quebec. Adult females lay clusters of two to three eggs in developing buds and can lay up to 250 eggs in one summer. Once the eggs hatch, larva enter developing flower buds to feed. This feeding can reduce seed production by up to 70 per cent.