Features Agronomy Genetics/Traits
When opposites team up for fresher bread

For bread lovers, there is nothing quite as delightful as a mouthful of soft, fresh bread – and nothing quite as disappointing as hard, stale bread. Now a new stay-fresh wheat line developed in Saskatchewan offers several extra days of that wonderful fresh-baked quality. 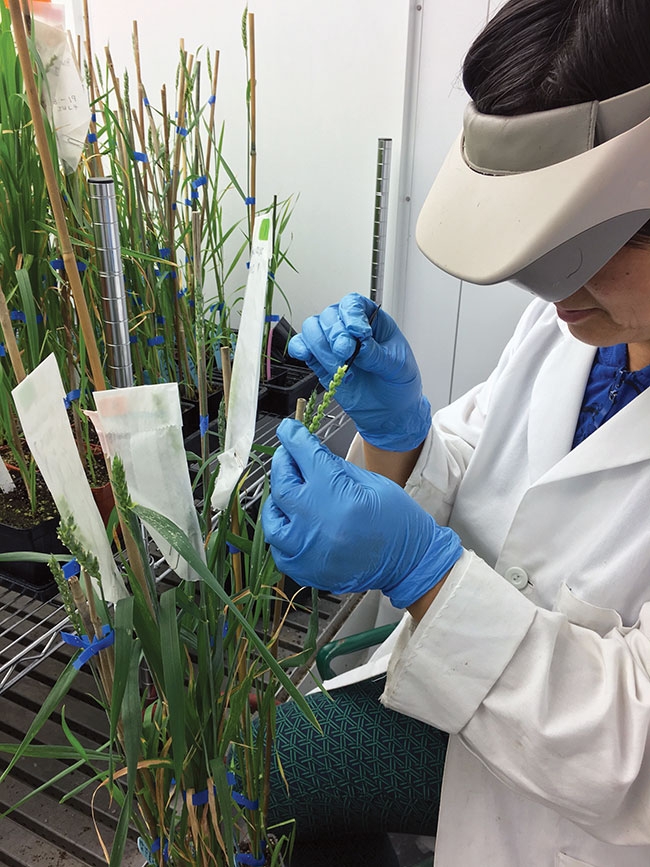 Patricia Vrinten, a researcher with Bioriginal Food and Science Corporation in Saskatoon, became interested in developing a stay-fresh wheat variety for a couple of reasons. “Staling is a big problem with bakery products, and a high percentage of bread is wasted, either in the bakery or after purchase, because of staleness. Another issue is the developing interest in clean labelling; perhaps especially in the United States, consumers increasingly would like a minimal number of ingredients in the food they purchase, with no chemicals or enzymes added. If bread could stay fresh longer without additives, both of these issues would be addressed.”

The development of the stay-fresh wheat line comes out of a broader research effort by Bioriginal and its collaborators. “Wheat grain is made up of approximately 70 per cent starch. For several years, we have been interested in modifying starch for new uses for the food industry and as a potential benefit for consumers,” she notes. “So we have been working to develop wheats with different types of starch.”

Vrinten and her colleagues have been working on both high-amylose starch, in which the amylose content is increased by 30 per cent, and amylose-free starch, known as waxy starch, which has 100 per cent amylopectin.

“We noticed that waxy wheat was included in some flour mixes by some bakeries to slightly increase freshness. And high-amylose wheat has some potential health benefits [such as improving digestive health and helping to fight against diabetes]. So we thought it might be a good idea to combine these traits,” she says. “But
neither amylose-free wheat nor high-amylose wheat used on its own produces top-quality bread loaves. And neither wheat produces a strong ‘stay-fresh’ quality.”

So, how do you bring these opposite traits together in the same wheat line in a way that captures desirable properties of high-amylose wheat, amylose-free wheat and regular wheat – and really enhances freshness?

That may sound like a tall order. But fortunately, wheat has a hexaploid genome. “Hexaploid” means that wheat’s DNA consists of three complete genomes, known as the A, B and D genomes, and each gene has three copies, one in each genome. Genes can be either active or inactive, and in a hexaploid plant like wheat, you can get a range of effects from a gene depending on which particular copies of the gene are active and which are inactive.

Wheat’s hexaploid genome allows Vrinten and her colleagues to achieve nuanced changes in their wheat lines through strategic combinations of active and inactive gene variants.

In the stay-fresh project, the researchers targeted two genes, called SSIIa and GBSSI, which are known to play a role in starch quality. They screened wheat germplasm from many different countries to find active and inactive variants of each of the two genes. Once they had identified these naturally occurring variants, the researchers developed perfect PCR markers so they could easily screen for the variants in their breeding materials.

“When we combined the inactive variants for all three copies of these two genes, we ended up with sweet wheat, which produces a lot of sugar. It potentially has some interesting uses, but it shrivels up when it is mature, like sweet corn. Therefore, its seed weight is greatly reduced and harvesting is difficult,” Vrinten says.

She also notes, “For both genes, the expression of the B copy of the gene was highest. But when we developed a line that had only inactive variants of the B genes, we didn’t detect much difference in freshness compared to normal bread wheat.”

The researchers hit the optimum combination for stay-fresh wheat when they developed a line with inactive variants in the B and D genomes, and an active variant in the A genome, for each of the two genes. The results were impressive when they compared this stay-fresh line to a control wheat line with the same genetic background that had regular starch properties.

“Compared to the control line, the stay-fresh line had a large improvement in freshness, while the yield, seed size, starch content and protein content did not change, and the amylose content was only very subtly reduced,” Vrinten notes.

Using conventional crossbreeding techniques, the researchers have moved this stay-fresh trait into a well-known bread wheat line from Agriculture and Agri-Food Canada (AAFC). They are now multiplying seed in a greenhouse to obtain enough seed for registration trials.

AAFC is one of the key collaborating agencies on this project. Vrinten says, “We have been working with AAFC wheat breeders, originally with Ron DePauw [who has since retired], and now mostly with Richard Cuthbert. AAFC will also be strongly involved in the registration trials. And they may be involved with testing related to baking qualities, along with the Canadian and international milling companies that we are working with.” Saskatchewan’s Agriculture Development Fund contributed funding for the backcrossing work to move the trait into the AAFC line.

If all goes well, this elite bread wheat variety with the bonus of the stay-fresh trait could be available in a few years.