More and more producers are starting to recognize the benefits forages provide in terms of improved soil quality and reduced erosion, notes Jack Kyle, the pasture and forage specialist at the Ontario Ministry of Agriculture, Food and Rural Affairs.

But, Kyle notes, “there are still many who don’t manage their forages to the optimum.”

The main – and significant – benefits of forages to the crops that follow is in added organic matter and improved soil tilth. However, Kyle warns that perennial forages must be managed correctly for benefits to be fully realized. “A well-fertilized relatively young stand of forage can be very productive,” he says. “But if there is limited fertility or the stand is old, you will not see optimal results.”

New offerings
Kyle suggests new varieties of annual and perennial ryegrass may be of particular interest to growers because these species are higher in energy than the other cool season grasses and therefore make excellent forage and pasture.

While the challenge in the past has been winter survival, he says, newer cultivars and blends of cultivars are showing not only better persistence, but also higher growing season productivity.

“Rye grasses prefer a cool moist climate,” Kyle notes, “but through breeding and selection, there are now blends that are doing well in Ontario.”

Another species that is relatively new is festulolium, a hybrid forage grass developed by crossing Meadow Fescue or Tall Fescue with perennial ryegrass or Italian ryegrass, which Kyle says can be used where
ryegrass might also be considered.

Matt Anderson, manager of product development at DLF Pickseed Canada, says festulolium combines the best properties of the two types of grass. “The fescues contribute qualities such as high dry matter yield, resistance to cold, drought tolerance and persistence, while ryegrass is characterized by rapid establishment, good spring growth, good digestibility, sugar content and palatability,” he notes. “The individual festulolium varieties contain various combinations of these qualities, but all are substantially higher-yielding than their parent lines.” DLF Pickseed has developed a substantial breeding program in festulolium that has produced a unique range of varieties.

On the legume side, Kyle says there is currently quite a bit of interest in sainfoin, in Western Canada anyway, because a new higher-yielding variety called AC Mountainview was recently developed in Lethbridge, Alta., by Agriculture and Agri-Food Canada (AAFC) scientist Surya Acharya. “There is a renewed interest in grazing and wanting to maximize the productivity of the pastures,” Kyle says. “Alfalfa is excellent from a forage productivity standpoint but the risk of bloat in grazing livestock discourages its use. However, sainfoin is non-bloating, and if you include it in a mix, its non-bloat characteristics would counteract the bloat-inducing qualities of the alfalfa.”

Sainfoin (from French words “sain” and “foin” meaning “healthy hay”) is a centuries-old forage from Europe and western Asia. The plant contains a fair amount of condensed tannins, which help a cow’s digestive tract more efficiently process plant protein, preventing build-up of gas in the rumen (bloating). AAFC trials are ongoing in western provinces and may take place in Ontario in future.

Forage cultivation – fertilize and think short-term
“I think one of the biggest mistakes with forage management is the lack of fertility applied to fields,” Kyle notes. “There is a significant amount of phosphorus and potassium leaving a hay field with each harvest. Often this is not replaced with commercial fertilizer or manure. Over a few years, the fertility in the soil is reduced, resulting in reduced plant vigour and shortened stand life.” Grass hay fields and grass pastures specifically, he says, need adequate nitrogen for good plant growth and productivity.

Kyle says most forage fields reach their peak production in the third year and then productivity starts to make a significant decline, yet producers often look for five to 10 years from a forage stand. Shortening the life of the stand to two or three years instead, he advises, will result in increased productivity and the positive impact on the succeeding crops will be maximized. Anderson completely agrees.

“In pastures, the biggest opportunity to increase productivity is to rotationally graze the pastures so that the forage plants get grazed over a short time period (a few days) and then give them sufficient time to recover and regrow,” Kyle notes. “Pasture fields should be managed in the same way as hay fields – harvest at the opportune time as quickly as possible and stay out of the field until there is sufficient growth to harvest again.”

Double crop forages
Double crop forages are forages that follow a cereal crop and are allowed to grow from mid-late summer through to a killing frost in the fall. With this scenario there is going to be ground cover during much of that time, Kyle explains. “This is what forages are all about – adding organic material to the soil through ground cover and also through root growth,” he says. “It reduces soil erosion and provides improved yields in succeeding crops. And the combination of ground cover and added soil organic matter provided by double crop forages is similar to what perennial forages provide, but on an annual basis.”

When planning double cropping with forages, Kyle advises a close look at the growth characteristics of the species that you are considering in the forage mix. “Find out whether or not the species will set seed in the fall, and if so, ask yourself if you can you manage it as a volunteer next year,” he says. “The same goes for any species that might over-winter – how are you going to control it next spring?”

Kyle also urges growers to ask themselves if there is a sufficient growing season for the species to gain reasonable root and top growth, and whether or not they wish to harvest some of this crop as forage. “If yes, what considerations will be necessary given that harvest is going to occur at a time when drying conditions are poor and frequent rains may well be occurring?” he asks.

Also ask if it makes sense to pasture the cover crop. “I think this is a real opportunity for cover crop utilization,” Kyle says. “By grazing, the nutrients stay in the field, you don’t have to deal with harvest issues and you have a very low-cost livestock feed, with added benefits to the soil. It’s a win all around.” 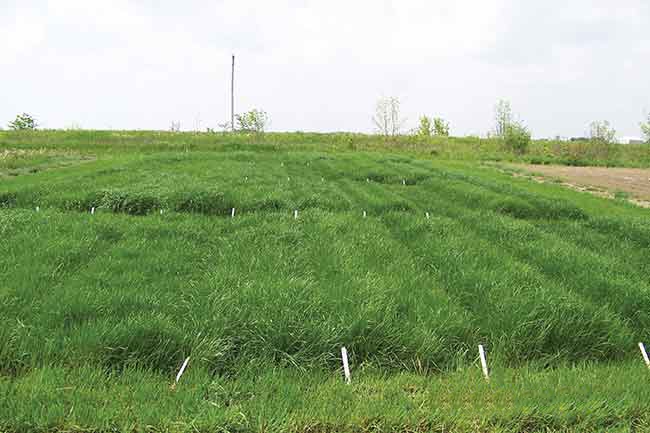