Features Soybeans Seeding/Planting
What soybean seeding rate should I use? 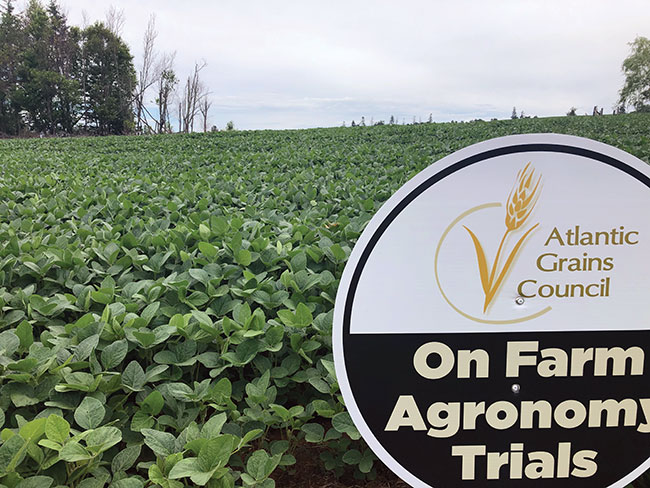 With seed being such a key input cost for soybean production, it’s especially important for soybean growers to use seeding rates that produce the greatest yields for the lowest seed costs. But what rates are best for growing conditions in the Maritimes?

“AGC’s on-farm agronomy trials are designed to be as close to regular farming practices as possible while still following protocols specific to each trial. So in these seeding rate trials, the farmers used their own equipment and followed their usual production practices, while we made sure the seeding equipment was calibrated and gave them the settings to plant at the different rates for the trial,” explains Misty Croney with LP Consulting, which is one of AGC’s implementation partners in its agronomy trials.

The participating farmers used their regular seeding depths, row widths, soybean varieties, tillage practices, crop rotations, and so on. LP Consulting kept track of all those details for each trial location, and counted the actual plant populations in each plot, monitored the plots, and recorded the yields.

Rates, populations and yields
“The biggest result was that there was no significant difference in soybean yield between seeding rates. And I wondered, how is that possible? Common sense would tell us that if we plant more seeds we should have a higher yield, but that’s not the case,” says Croney, who has been analyzing the data from these trials.

Why did seeding rates and plant populations make so little difference to soybean yields over the range of rates used in these trials? Croney says it is likely because soybean plants are very good at compensating for lower plant populations.

“With fewer plants crowded in, each plant can capture more sunlight, and some varieties can branch more.” On the other hand, very dense soybean plant populations mean greater competition between the plants for sunlight, moisture and nutrients, which limits the growth of each plant. Dense stands may also increase the risk of disease.

“The results from the trials lead to the conclusion that there is no economic advantage to seeding soybeans at high rates,” she says.

“Really, by seeding at high rates, all you are doing is increasing your input costs and decreasing your potential net returns.”

Croney also looked at the effect on soybean yield of the previous crop in the rotation. In these trials, the crops before soybeans included wheat, barley, oats, soybeans, corn, potatoes and forages.

She thinks the challenges in hitting the target plant populations were partly due to equipment limitations. “Some farmers have described seeding with a drill as ‘a controlled spill.’ And not all seeders are created equal; for instance, some of them can be dialled in more accurately than others,” she says.

“Also, you generally calibrate the equipment in your barn or on flat ground. But when you are out in the field, the jostling and bumping as the equipment moves across the land can affect how the seeds fall through the seeder.”

Croney is hoping to look into some of the other practices that varied from location to location – like soybean variety, row widths and fertilizer practices – to see how they relate to plant populations and yields in the trials. “I am continuing to look at other factors and trends in the data through our collaboration with Agriculture and Agri-Food Canada, which calculates the stats for us.”

AGC’s research is funded in part through a voluntary research check-off. AGC has used those check-off funds to match with Agriculture and Agri-Food Canada funds and access federal/provincial research funding.

Take-home messages from the trials
“Based on the trial results, my recommendation is to seed between 130,000 and 160,000 seeds per acre,” Croney says.

“I’ve looked at the minimum yields, maximum yields and average yields, and the input costs from the trials. With a seeding rate of 130,000- to 160,000-seeds per acre, you are going to maximize your yield potential and minimize your risk of low yield,” she explains.

“The lowest seeding rates – 90,000 and 110,000 – had the lowest yields recorded in the trials, even though those rates sometimes had really great yields. So those low rates are risky.”

The highest rate of 190,000 seeds per acre not only had the highest seed costs, but also the lowest average yield, so it was a poor option.

“Another take-home message is to really try to get the best calibration you can for your seeding equipment,” Croney notes. 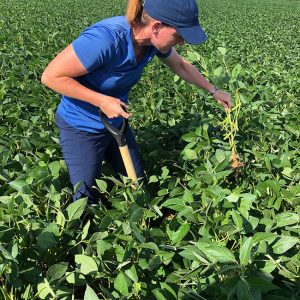 Misty Croney monitoring one of the plots in the soybean seeding rate trials. Photo courtesy of Lise LeBlanc, LP Consulting. 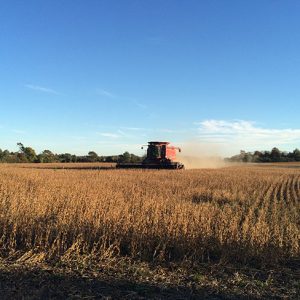 Based on the trial results, a rate of 130,000 to 160,000 seeds per acre will maximize yield potential and minimize the risk of low yield. Photo courtesy of Misty Croney, LP Consulting. 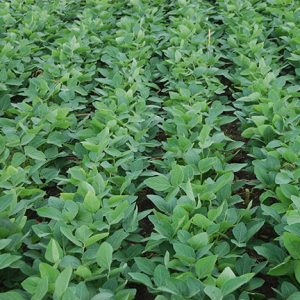 Soybeans are adaptable to a wide variety of row widths, but wider rows typically mean a lower plant population is required. Photo by Top Crop Manager.

One of his main recommendations is to use properly maintained and calibrated seeding equipment. Hamill, who is with the P.E.I. Department of Agriculture and Land, explains that the seeding rate chart on your seeder gives you a starting point for achieving your desired seeding rate. Then you determine the actual settings through the calibration process. If you would like step-by-step details on seed drill calibration calculations, Hamill has a new calibration video, article and spreadsheet available on the AGC website (atlanticgrainscouncil.ca).

“When you calculate your seeding rate, it is very important to base it on your seed size. Seed size varies greatly between soybean varieties and even between lots of the same variety,” Hamill emphasizes. The formula used in Hamill’s calibration article accounts for both the seedlot’s seed size and germination rate, another key factor affecting how close your seeding rate will come to your target plant population.

“I also recommend that you use high-quality seed with good vigour and germination, so I highly recommend using certified seed,” he says. “Seed treatments will help improve stands by providing early season protection against diseases and insects, especially with earlier planting dates. In addition to seed treatments, inoculating your soybeans can help increase yields in some situations.

“However, seed treatments and inoculants also can affect the flow of the seeds during seeding and sometimes cause bridging [clumps of seeds sticking together] especially in box drills. So it is always a good idea to calibrate your equipment with the actual seedlot that you will be planting.”

Hamill notes, “The main objective of any seeding rate is to optimize your yields and minimize your seed costs, so you want to adjust your seeding rates based on factors like planting date, field conditions and row widths.

“If you are planting within the optimal time frame, go with the recommended seeding rates for your area. But if you are outside that window, consider adjusting that rate accordingly,” he explains.

Regarding field conditions, Hamill suggests you consider using a higher seeding rate when you are seeding into difficult conditions like cold, wet soils, heavy crop residue, or soils that are prone to crusting.

For row spacing, he says, “Soybeans grow well under a wide variety of row widths, but generally speaking the wider the row spacing, the lower the plant population that is required.”

“When planting, unless your planter is equipped with high- speed planting technology, try to limit your speed to five miles-per-hour or less. That will provide you with the most accuracy and the best stand establishment. Often if you are going too fast, your singulation [the ability to drop one seed at a time] is reduced and you’ll end up with more skips and doubles,” Hamill explains.

“It is also a good practice to get out of your tractor every so often to check your seeding depth and do some seed counts to make sure you are actually hitting the correct seeding rate. There are lots of charts and tables available to assist growers in doing these counts,” he notes.

Using properly maintained and calibrated equipment, fine-tuning the seeding rate for your specific situation, and keeping an eye on things during planting will all help get your soybean crop off to a great start.