Features Agronomy Soil
What moves beneath your field?

How many earthworms are in your field? Likely only a few farmers can answer that question. Maybe the better question is – how many farmers should care about the number of earthworms in their fields? 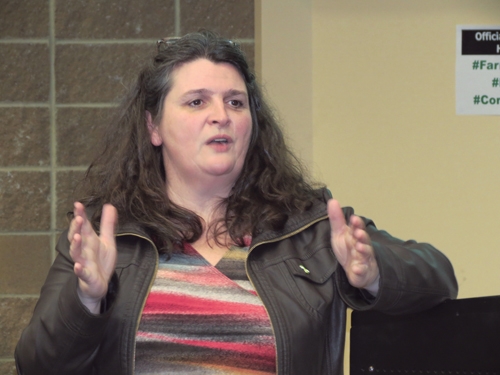 Odette Ménard of the Quebec Ministry of Agriculture How many earthworms are in your field? Likely only a few farmers can answer that question. Maybe the better question is – how many farmers should care about the number of earthworms in their fields?

According to Odette Ménard of the Quebec Ministry of Agriculture, Fisheries and Food, the answer is, all farmers, because earthworms are vital to maintaining and establishing healthy soils. “We need to feed the soil if we are to feed men,” she says, explaining earthworms can offer simple solutions to combat issues with compaction, improve soil structure and
reduce the vulnerability of the soil itself.

“Soil health isn’t just about the chemical make-up,” says Ménard. “The challenge is to talk about the soil with respect to its physical and biological properties.” And that’s where earthworms become important. These creatures help to aerate the soil, build and maintain soil structure, increase hydrology, improve nitrogen efficiency and reduce pests and diseases.
Ménard says farmers often worry earthworm tunnels will increase the chance of nutrient leaching within their soils, but that’s not the case. In fact, since earthworms stay close to living plant roots – often within one inch – their tunnels support overall root development. “More holes in the soil means the soil is actually in better shape,” she says. “And the better the soil, the more root development, counterbalancing leaching.”

Minerals, water and air account for approximately 95 percent of the soil’s components, with organic matter (including plant roots) making up the remaining five percent. Earthworms feed on the bacteria and fungi found in the soil’s organic matter and turn it into additional soil nutrients in the form of their excrement through decomposition. Ménard says that,
“for every earthworm I see in the soil, there is four times its weight in bacteria and fungi that I don’t see.”

To increase populations, farmers can start by leaving 30 per cent crop cover on their fields, but “you can’t just leave residue and expect the population to grow,” she says. Earthworm populations are dependent on the soil type, crop rotation, residue and tillage methods.

Crop rotation, reducing soil compaction and no-till or rich-tillage systems are conducive to earthworm habitats. These creatures prefer perennial crops and deep roots, so Ménard suggests farmers looking to increase their earthworm populations start with an alfalfa type crop, rotating with soybeans since the creatures appear to like soybean residue. Earthworms also have soil and pH level preferences, so try to keep pH levels higher than 5.5. And not all soils are healthy for earthworms, she adds. Because they breathe through their skin, sandy soils are more aggressive and harder for the worms to survive in.

Sometimes referred to as “ecosystem engineers,” earthworms are an integral part of developing and maintaining good, uniform soil structure. Soil health and the role earthworms can play in crop productivity shouldn’t be overlooked. So go ahead and dig, just as Ménard suggests, see for yourself the impact earthworms can have in, and on, your fields.

How do you know if you have enough earthworms in your field? According to Odette Ménard of the Quebec Ministry of Agriculture, Fisheries and Food, it’s simple – dig for them to see for yourself. She’s often surprised by the number of farmers who have never dug a hole in their field to examine the soil or check for earthworms.

To find earthworms in a field, first look for their middens, also known as the worm’s home, and often surrounded by field debris and the worm’s excrement. An earthworm’s tunnel creates pores through which oxygen and water can enter and carbon dioxide can exit the soil. While the lifespan of an earthworm can vary, Ménard says, their tunnels can last up to 30 years if undisturbed. Worms work only at night, building their middens or feeding off crop residue such as corn stalks and wheat stubble. They are deaf and blind, selecting debris at random, and using their tails to suck the residue, and pull it to build their middens.

Farmers are likely to find three types of earthworms in their fields – epigeic, endogeic and anecic. Epigeic earthworms live on the surface of the soil in crop residue and live only 90 to 150 days. These species tend not to make tunnels, but live in and feed on crop debris. Epigeic earthworms are often bright red or reddy-brown. Endogeic earthworms live in and feed on the soil and have a life span of 150 to 210 days. They make horizontal tunnels through the soil to move around and to feed and will sometimes reuse their tunnels. Some endogeic earthworms can tunnel very deeply into the soil and are often pale colours such as grey, pale pink, green or blue. Anecic earthworms make permanent vertical tunnels in soil and live the longest, 400 to 500 days. They feed on crop residue found on the soil surface that they drag into their tunnels. They also make middens (piles of excrement) around the entrance to their tunnels. Anecic earthworms are darkly coloured at the head end (red or brown) and have paler tails.

Sensitive to pressure, earthworms use pressure as their sensor and prefer humidity, which is why they often come to the surface in the damp weather after a rain. Earthworms also come out of their holes to mate. Although they possess both sexual reproductive organs, they do have to seek out a mate to reproduce. Most importantly for farmers, worms come out of their middens to “poop,” leaving excrement filled with valuable nutrients on top of the soil. In fact, an earthworm can produce its own weight in excrement in a day.


Related
Reaping the benefits of earthworms
Field crop disease management in Canada part two: Where are we now?
Delayed field work across Saskatchewan
Choosing your field for peas