Uncategorized AG Tech
Cultivating Innovation: What are the greatest impacts of ag tech? 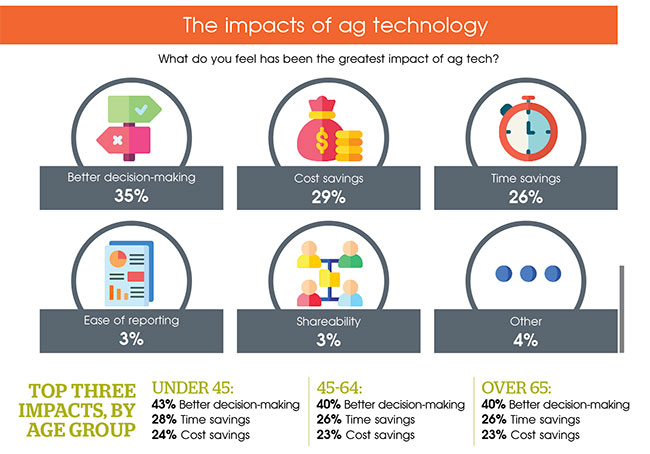 As in much of agriculture, practicality is key to the uptake of ag tech. No matter how futuristic or ambitious a piece of tech or practice is, if it doesn’t have a clear, demonstrable benefit in some way, it likely won’t stick as part of the operation. But what positive impacts rank as most important to farmers?

Three of the available survey options for the greatest impact of ag tech were clearly favoured: better decision-making, at 35 per cent; cost savings, at 29 per cent; and time savings, at 26 per cent. Other options included ease of reporting (three per cent), shareability (three per cent), and some impact other than the available choices (four per cent). All 1,218 respondents agreed that one of the choices listed above was a significant enough impact.

Kerry Wright, CEO of the Canadian Agri-Food Automation and Intelligence Network, stresses the importance of connectivity – technological and interpersonal – as well as data and the ability to improve profitability. “Knowledge truly is power, so [for farmers], being able to identify those key opportunities and being able to hone in on those,” Wright says. “There are hundreds of decisions, and some of these are absolutely out of their control. But being able to grasp onto the things they can [control]” and best utilize them will help lessen the impact of those uncontrollable factors. 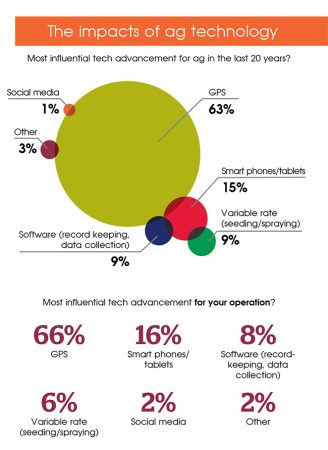 Darcy Herauf, director of FCC Ag Expert, notes the importance of technology that can help farms be more efficient, in and out of the field. “Especially with the new generation of farmers coming up . . . We survey a lot of them, and family time is becoming more and more important,” he notes. “Maybe we’ve all learned from our parents that there can be a little bit of fun in farming and life. I think the generation preceding me was so heads-down on the farm, they sometimes forgot about that.”

Variable rate seeding and/or spraying and record-keeping or data collection software were tied at nine per cent each for general ag advancements, with social media (one per cent) and another, unlisted operation (three per cent) rounding out that category. For influential tech advancements on individual operations, record-keeping or data collection software came in third highest at eight per cent, followed by variable rate seeding and/or spraying at six per cent, and social media and another, unlisted option tied at two per cent each.

“A lot of farms are thinking increasingly like businesses,” says Alain Goubau, CEO of Combyne Ag. “I always have this stereotypical business statement: ‘You can’t manage what you can’t measure.’ So, for me, a lot of this technology is about measuring in the sense of precision ag and sensors, but also the simple record-keeping around more business-level measurements.” Tracking metrics like revenue, input costs, and average realized price on grain sales puts farmers in a position to make more informed decisions.

Watch: What are the greatest impacts of ag technology?


Related
Video: The current state of ag tech
Video: The impact of ag tech
Cultivating Innovation: What does the future hold – and how do we get there?
Video: Barriers to adopting technology