Whether it’s online or from a printed source, soybean specialists advise that the safest choice can best be made by looking for a blend of maturity, yield and stress tolerance.

Consider that crop stress varies from place to place as well as year to year, and it can play a big role in final yield results. In addition, ith the advent of Roundup Ready 2 soybeans for 2012, many trusted older varieties will disappear. Many varieties will be on the market for the first time, and many more can be expected in 2013.  That makes variety selection difficult and daunting.

Nine companies are offering more than 50 varieties of soybeans for growers in 2012, according to the new Seed Manitoba variety selection and growers’ source guide. That’s not too bad compared to North Dakota.

“It takes too much space to test 350 soybean varieties in a replicated fashion. We can’t manage that many,” says Hans Kandel, North Dakota State University extension agronomist, Fargo. “The turnover of varieties is very, very rapid, and some are available only for a few years. That makes it very challenging for researchers and producers.”

“Growers do have lots of choices,” says Dennis Lange, Manitoba pulse crop specialist, Carman. “The biggest thing for a grower to look at in Manitoba is the balance between maturity and yield. We have to balance the risks and the rewards.”

There’s risk in being too focused on looking for a promising combination of yield and maturity for the next seed purchase, according to the agronomists. Those big factors, or filters, shouldn’t be the only guideline.

“Stress factors are important. A farmer really needs to look at the strength of the individual variety. Purely looking at yield is the wrong way to look at it. Yield is important, but maturity is critical,” says Kandel.

Just as there is natural genetic variability to maturity and yield, soybeans also vary in their response to wetness, dryness and disease.

North Dakota trials
Iron chlorosis is the most important stress for most North Dakota growers. It occurs when growing soybeans are in extended wet conditions with cool soil and are unable to take up enough iron from the soil. Leaf tissue becomes pale to yellow, from lack of chlorophyll, while the veins become dark and prominent.

“It’s a big issue in our Red River Valley,” Kandel says. “We also pay attention to cyst nematode that’s creeping into our region from the south. The only way to combat those issues is by selection.”

On both sides of the border, variety trials by companies, universities and government agencies monitor many details of crop performance. Pointing to a table from recent North Dakota variety trials, Kandel says it reveals the effects of stress. The NDSU experiment station began intensive checking of all North Dakota varieties in soybean trials for response to iron chlorosis in 2010. For the first time, because all the varieties were side-by-side in the same conditions, the state could observe them for meaningful differences.

Trial plots were planted side by side and replicated to test for excessive moisture stress. One set of trial plots had natural growing season rainfall. The matching set was purposely stressed with over-irrigation at flowering and early pod set. After a ‘struggle’ it reached maturity.

“The average yield in 2011 for the ‘dry’ was 33.5 bushels an acre; the average wet yield was 27.8 bushels an acre,” Kandel says. “In the past, we’ve seen 10-bushels and more for yield difference when the natural rainfall was less stressful.”

Results of the 2011 testing can be seen at www.ag.ndsu.edu/pubs/plantsci/rowcrops/a843.pdf.
Selection principle
It points to a principle. The lineup of top-yielding varieties is different under the water stress. The same would be true under other stress such as extreme dryness, diseases and even pest pressure.

“Diversify your genetics into being more robust,” Kandel says. “You should select one that will be high in whatever stress conditions you expect, or one that has more stability across conditions.”

Manitoba Online
Tables with current variety trial results are essential to the decision-making process. Online, Manitoba’s new website, www.seedinteractive.ca, promises to be a huge help when the soybean guide is posted in for the first time early in 2012. It will have a multi-stage selection system for narrowing the choices.

Seed Interactive for soybeans will allow growers to choose from several check varieties grown in the past two years and compare them to new varieties. According to Lange, it will allow rolling averages for varieties so that growers can make choices based on multi-year data. It will include data for maturity, yield, hilum colour, location and more.

Seed interactive began in early 2011 with a selection system for cereal varieties. Canola and soybean selection tools for varieties will follow the same principles although the format may be different.

For cereals, the user selects an appropriate growing zone, the type of cereal and a check variety. It then offers all the varieties likely to reach maturity in the zone. In the “Run Report” detail, the user can select four sub-categories (yield, agronomics, disease resistance, other information) for interacting with the available information.

Filter, filter, filter
Making a good choice foundation for the crop year is extremely important, Lange says. In Manitoba, because soybeans are a long-season crop, always filter first for the maturity that will be reliable where your fields are located.

“If you can’t get it to mature in your region, nothing else matters,” he says.  “Yield will be your second filter.”

It may not be possible to find valid side-by-side reports for performance of new varieties under that most likely stress in 2012 in your location, but look for evidence of response differences for the top favourites that remain on the list.

“We’re still learning about differences in drought tolerance. Growers have to start watching for root rot as rotations get a little shorter, and stem rot is another issue that will come into play,” he says.

As a final marker, Lange suggests, consider seed size. In the same variety, seed size can vary somewhat from year to year depending on growing conditions and locations. Ask retailers for the seed count information, ask where it was produced. 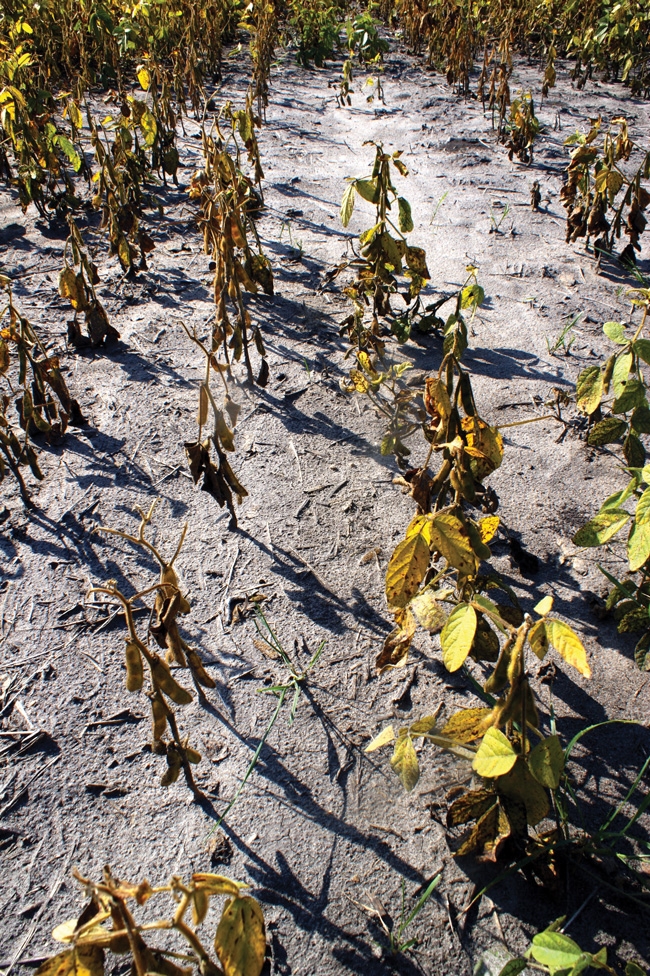 Assess yield stability as one of the selection criteria. Whether it’s online or from a printed source