Largely overlooked and previously not studied a lot in Canada, weed seed predation provides the second-largest loss of weed seeds from the seed bank, second only to germination. Although research has been almost exclusively carried out in Europe and the United States, recent research at the University of Saskatchewan proves weed seed predation is occurring in western Canadian cropping systems and can be measured. 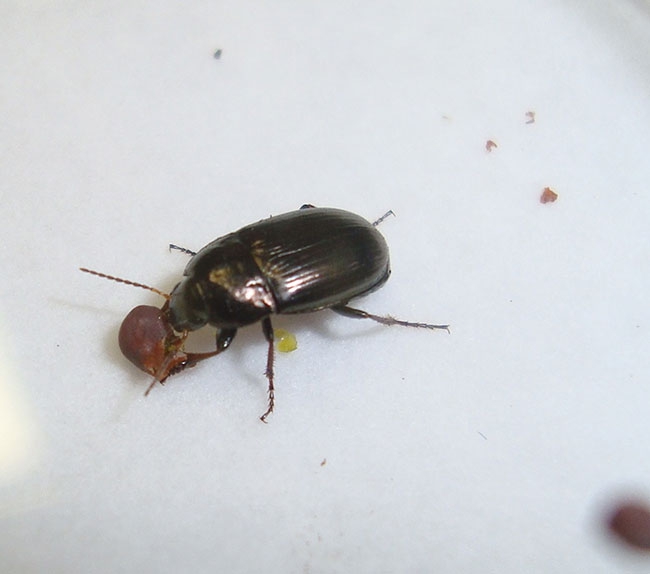 “Generally, the idea of weed seed predation is thought of by growers as a basic concept or highly theoretical, but it is not,” says Chris Willenborg, assistant professor in the department of plant science at the University of Saskatchewan. “Weed seed predation is actually happening in fields every single night of the late summer and fall. Because many of the weed seed predators are nocturnal, they tend to be out of sight, out of mind and therefore are generally overlooked. Weed seed predation plays a tremendously important role in terms of weed seed management, adding another biological control option that is free to the weed management toolbox – particularly for problematic weeds such as volunteer canola. Weed seed predation can actually serve as a critical component of the population dynamics of some weed species over the long term.”

Many insects help
Although farmland birds and rodents consume many weed seeds, the large majority of weed seed predators in western Canadian cropping systems are granivorous insect species dominated by crickets and carabid beetles. Several of these are granivorous species that feed exclusively on seeds, however, there are some that are omnivorous and will also prey on insect larvae that can be problematic pests in some crops. There are hundreds of carabid species in Canada, with about 70 generally known to be present across the Prairies. In Europe, recent studies have documented carabids’ weed seed consumption at rates of up to 75 per cent for problematic weeds like chickweed and shepherd’s-purse. One earlier study in Eastern Canada showed carabids reduced the seed stock of weed species by 65 to 90 per cent, almost totally eliminating the weeds.

“We started our research into weed seed predation about five years ago, and as far we know, our work is the first in Western Canada in the agroecosystem,” Willenborg says. “Along with an extensive literature review, we also conducted laboratory, greenhouse and field studies and have recently expanded our research program to try to quantify contributions of carabids. In our primarily no-till system, the majority of weed seeds land on the soil surface, but some get buried through various field activities.”

Mostly forage from the soil surface
One study showed the vast majority of weed seeds are consumed by carabid ground beetles from the soil surface, however some species will dig down a couple of centimetres. Although seed predation was high at the soil surface and at shallow burial depths, deeper burial of seeds reduced but did not eliminate weed seed predation. The results also show seed predation by carabids differed markedly between surface-scattered and buried seeds, as well as among beetle species and between genders. These studies were conducted under controlled greenhouse conditions and thus, fieldwork is needed to validate the results of this experiment and to quantify seed predation under field conditions. Ideally, such studies would also include an attempt to quantify the contributions of carabid larvae, as well as adult beetles, to seed predation.

Willenborg and his team also wanted to determine what drives weed seed preferences for carabid species. In greenhouse studies, they tested the species’ preferences for various Brassicaceae weed species, including volunteer canola, wild mustard and stinkweed. “We wanted to know if the carabids could decipher between different seeds that look quite similar, and in fact they did exhibit distinct preferences,” he says. “Most of the carabid species preferred volunteer canola seeds, while the fewest preferred stinkweed. We expect that is most likely olfactory [smell] cues that are eliciting the response rather than visual cues.” In another study just published in January 2017 in the journal PLOS ONE, Willenborg, PhD student Sharavari Kulkarni and colleague John Spence showed olfactory cues are in fact driving these preferences, so the next question is to assess olfactory cues in weed seeds and determine the factors that affect them.

Now that researchers have confirmed and measured weed seed predation by carabids, finding ways to promote their survival in cropping systems is important. Carabid ground beetles are beneficial insects, like pollinators, and thus provide crucial ecosystem services by controlling other pests. Willenborg explains that trying to achieve a zero-tolerance weed threshold, which is considered a strategy to address herbicide resistance, is not only very difficult to achieve in cropping systems, but it could also unexpectedly eliminate or reduce the numbers of these weed seed predators.

Armed with very interesting research results from the first set of projects, Willenborg and his team are moving forward on additional research to try to determine why carabids are choosing certain weed seeds and to prove what other chemical compounds or factors may be involved. Researchers are also interested in carabid foraging strategy and hope to determine how, when and where they go out to forage for weed seeds, why they choose certain field areas or weed seeds and what their ultimate preferences are. Click here for key cropping strategies.

Weed seeds for pulses
“One of the big initiatives we started in 2017 is to look at weed seed predation in western Canadian pulse crops,” Willenborg says. “Most of the research work elsewhere has been done in soybeans, and there is virtually nothing across the world in the pulse crops we grow on the Prairies. Pulses tend to be seeded early and maintain an open canopy throughout the season. We don’t know what is driving weed seed predation in these crops, and we would like to learn more, particularly as it pertains to the consumption of volunteer canola seed, which is a serious weed problem in pulse crops. Comparing options such as deploying cover crops, interseeding annuals and perennials or ridge or strip tillage as strategies to improve levels of weed seed predation may be considered. We will be taking a basic approach to find out how these insects forage and combine the results with practical strategies and practices growers can do, especially in pulse crops.”

A welcomed biological control
Weed seed predation is a welcome biological weed control option in Western Canada, as researchers and growers look for ways to manage increasingly difficult and complex weed problems and issues such as herbicide resistance. “Understanding that next to germination, the number one method of weed seed losses through the system is due to weed seed predation, we need to be thinking about how these predators are impacting our cropping systems and how to provide habitat for them,” Willenborg says. “Any time you have a beneficial biological control organism operating for you for free while you are out doing other things pays huge dividends in the end. Uncovering what is going on in the field with these seed predators and what we can do about it will go a long way to helping growers. Next fall, late in the evening when you
begin to hear crickets, remember that is the sound of weed seed predators in the fields eating your weed seeds, and that’s money in your pocket.”

Make sure you never miss another great story! Subscribe to our newsletter. It’s free!