Spraying herbicides well is both an art and a science. But it’s also mostly a matter of always doing certain things and never doing others, according to Mike Cowbrough, weed management field crops lead at the Ontario Ministry of Agriculture, Food and Rural Affairs  (OMAFRA), and Steven Johns, agronomic sales rep with Syngenta Canada.

So how do farmers improve weed control success through spraying well? Let’s first look at mixing. Cowbrough points out that successful tank mix compatibility is all about starting with a clean tank and making sure products are mixed efficiently. “Some products are easy to foam, like glyphosate and water, and if you add a de-foaming agent prior to adding the glyphosate, that will take care of it,” he says. “Also, always make sure your inductor is full so it’s not drawing air, and minimize agitation.”

More serious issues with gelling and clogging of spray lines seem to occur often with EC herbicides and a dry granular product. “Do a jar test if there is any doubt,” advises Cowbrough. “Mix up a little batch in a pint jar that’s the equivalent measurement to what you’d apply to an acre. I once mixed 2,4-D amine and Sencor DF, for example, in a jar test and didn’t let Sencor dissolve well enough first, so I got a coarse white precipitate in the jar that was hard to flush away. It would be exponentially worse to clean up in a sprayer.”

Johns advises those using a new tank mix to ask the retailer to double-check about things like mixing order. “Surfactants can also be added to make products compatible,” he says. “Many products that contain atrazine don’t ‘like’ to be mixed with glyphosate, but if you add a non-ionic surfactant, you can make them very compatible.” He reminds farmers to pay attention to the general
mixing rules: add wettables, powders, granules, then agitate, then liquids, flowables, and ECs, followed by true solutions.

“All of us are in a hurry at springtime, and we have to slow down and remember that these products were never designed to mix with each other, so we need to mix one thing at a time, and give it time,” he notes. “With dry flowables, put them through the inductor to smash them and then they’ll get suspended well in solution. Temperature and water volume are also very important.”

Cowbrough agrees. He notes that low water volumes can have a very negative influence on how well high-volume dry granular flowable herbicides dissolve. He advises using high water volumes if you want to have complete dissolving, and prevent product sedimentation in the first place. “With any flowables or wettables, you should have valves on your boom sections, and flush your system well,” Johns adds. “I’d also like to stress that you should never leave a partial tank sitting around unapplied, unless you have the spare time to agitate it every hour or two until you want to finish applying it. If you let stuff sit in sprayers for any length of time, sedimentation can occur. So, go ahead and finish spraying even if it’s raining. And also remember, never put products into jugs that aren’t correctly labelled.”

Cowbrough also makes the point that products might not fully dissolve in acidic or alkaline water. He says studies done at Purdue University in the U.S. showed that the efficacy of Eragon was found to be reduced in acidic water, for example. “The price of litmus paper is cheap, so testing your water is worth it,” he notes.

Application advice
Last year, Cowbrough and his colleagues conducted weed surveys across the province in six counties and found that six weed species were predominant. Canada fleabane and giant ragweed are at the top of the list, but so is lamb’s-quarters. “It’s a species that we get asked about in terms of whether it’s herbicide-resistant,” he notes. “But that’s not going on and yet it seems to be resistant. So, what is it?”

Johns notes that to answer that, we need to take a close look at application. “Soil application is different than contact post-emergence application, but with lamb’s-quarters or giant ragweed, we advise using a higher water volume post-emergence,” he says. “You are spending a lot of money on herbicides, so make sure they work. Don’t skimp and you’ll get much better droplet dispersion and much better results.”

Cowbrough’s survey results also revealed the fact that what is being reported as lamb’s-quarters might actually be fig-leaved goosefoot. “So, make sure to do good scouting,” Cowbrough advises. “And make sure you are trying to spray when the lamb’s-quarters are small, at the eight-leaf stage. When you apply herbicides at this stage, control is excellent.” At medium size (three to four inches tall), glyphosate efficacy with lamb’s-quarters is still excellent, but the efficacy of Basagran and Pinnacle falls off. At six to eight inches tall, Basagran and Pinnacle are not effective on lamb’s-quarters at all, Cowbrough notes, and glyphosate cannot do well because there is too much calcium in the leaves. He adds that if weeds are at a high density, they can shade and protect each other; so again, getting them when they are small is very important.

So, size matters, but so does time of day. Cowbrough says different time-of-day herbicide applications on velvetleaf and lamb’s-quarters were recently compared by Peter Sikkema, a crop scientist at the University of Guelph (Ridgetown). Sikkema found that control of velvetleaf is much better if spraying is conducted between 9 a.m. and 6 p.m. Johns points out that earlier than 9 a.m. and later than 6 p.m., dew can interfere with efficacy, so make sure the field is dry. Time of day also affects leaf orientation. For velvetleaf in particular, the leaves drop as the sun goes down, so spraying later in the evening is not recommended. The efficacy of glyphosate and other herbicides can also be reduced by soil and dust on weed surfaces.

“Also keep in mind that a thick crop canopy appears to serve the same function of another residual herbicide application,” Cowbrough notes. “Less sunlight getting through means fewer weed seeds germinate. So, use whatever seeding rates and whatever row space you wish, but don’t ignore fertility.” He says studies have shown that soybean canopy closure is much quicker with the use of both a pre- and post-emergent herbicide program. “But we know that less than 20 per cent of glyphosate-tolerant soybeans receive a pre-emergent herbicide application,” he says. “That’s something to think about.” 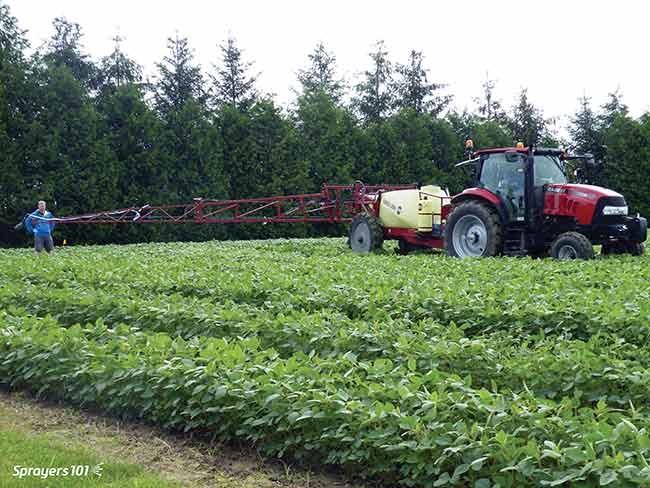 More serious issues with gelling and clogging of spray lines seem to occur often with EC herbicides and a dry granular product. “Do a jar test if there is any doubt Spraying herbicides well is both an art and a science. But it’s also mostly a matter of always doing certain things and never doing others