It took a lot of work, but one young Manitoba grower and entrepreneur finally has the answers the customers of his short-line machinery business have been looking for.

Darren Faurschou has a diploma in agriculture and operates a family farm in the Edwin area, west of Portage la Prairie, Man. He also serves as president of the Faurschou Ag Center, which opened in April 2015 and retails air drills, precision planters and a line of independent corn headers that adapt to row spacing. Many customers question the benefits of planting corn with an air drill versus a planter, so last year Faurschou contracted with the University of Manitoba’s department of biosystems engineering to use his 125-acre field and his own machinery for an independent evaluation of row spacing and seeding systems for corn yield and rate of emergence.

There were eight treatments on the field; each treatment was repeated five times in the randomized experiment. The seeding equipment was adjusted to have a uniform two-inch seeding depth. Most plots were planted on May 8 and 9, 2016.

Craig Heppner, a recent graduate from the University of Manitoba’s bachelor of science in biosystems engineering program took on the challenge of managing the 40 plots, recording data and processing the results as part of his undergrad thesis. Faurschou provided machinery, set up the field, supplied seed (Pioneer 7332) and was responsible for applications to protect the crop from weeds and disease.

“I went with the big field for plots because size is important,” Faurschou says. “If you’re out a point on a big plot, the impact is less. You are more accurate in your detail. Real machines – commercial equipment – do all the work in real-life scenarios. Things like dry spots and wet spots average out at the end of the day.”

To be sure the results were impartial, Faurschou asked the university to handle the data collection.

Results
Faurschou had expectations about the results, and some were proven. For instance, it’s tradition in southern Manitoba to plant corn in 30-inch rows with 7.5-inches between plants in the row. For decades, planters and harvest headers have been built for that 30-inch row spacing.

“I thought the paired-row on the [Monosem] planter would do the best overall. There’s a lot of research to show that, and it did beat the 30-inch single row,” Faurschou says.

The Monosem planter twin rows are 30 inches on centre; each seed row is four inches off centre.

But in each row-spacing comparison, the 30-inch row option had the lowest yield.

“I thought the 7.5-inch would be the best for the air drill, on the theory of narrow rows using more sunlight. What I found was, for the paired row, the 15-inch and the 7.5-inch trials almost filled the rows at the same time. The 30-inch never really did completely fill in,” he says.

Overall, the 15-inch spacing had the highest yield for both the air drill and for the planter.

“It ended up doing the best. I was really surprised by that,” Faurschou says.

Heppner’s detailed analysis, converted from metric, comes to this conclusion on corn yield: “When comparing effects of the seeders, average yield for the planter was 173 [bushels/acre] bu/ac compared to 161 bu/ac for the air drill. This translated to a 5.5 per cent difference in yield.”

“When comparing effects of spacing only, yield was found to be the highest for 15-inch plots at 173 bu/ac. The 7.5-inch plots were not statistically different than this at 168 bu/ac. The 30-inch and paired row plots were significantly lower at 162 bu/ac and 164 bu/ac, respectively.”

“The best-case spacing and seeder for south-central Manitoba in a year with similar environmental conditions would be a planter spaced at 15 inches.”

Answers and advice
The work required to run the 40 site trials on 125 acres was more than Faurschou expected. He estimates the time commitment was four to five times as much as he would have needed to plant and harvest a conventional field of corn.

However, now he has answers and advice based on science rather than experience and educated guesswork.

Now, according to Heppner, there is proven evidence that a planter will return more corn than an air drill and that row spacing returns more corn at 15 or 7.5 inches than it does at 30 inches.

Due to the explosion of soybean acres in Manitoba, many farms now have a 15-inch row crop planter in addition to an air drill. It was assumed – but not proven – that lifting every second seed run on the soybean planter would be the best practice for planting corn.

Still, many farms are equipped with only an air drill. Faurschou’s trials show that if the farm has an air drill with 7.5-inch spacing, simply putting a seed block on every second run can convert it for seeding 15-inch corn rows.

One caution with this, he notes, is that the Salford air drill used in these trials is a double-disc opener. Most air drills probably have only a single disc opener.

“With a single disc, you may not have the same depth control, so the results might be different,” he says.

After studying his results, Faurschou believes the evidence points to Manitoba corn being “happiest” on 15-inch spacing between rows and between plants. In this set of trials, that spacing allowed for the optimum use of available sunlight, moisture and nutrients and consistently produced the highest dry bushel yield.

The results give Faurschou some pretty clear-cut answers for anyone with questions about row spacing.

There’s also an economy-of-scale factor. On 15-inch rows, Darren says the average yield advantage was 6.6 bu/ac in favour of the planter; the least difference was four bushels an acre.

Using the conservative numbers, Faurschou suggests the four-bushel yield advantage on $4 corn is almost enough to justify buying a planter if it’s time to replace or upgrade an air drill.

But, there’s more to consider.

“If you’re growing just a quarter of corn and you have an air drill that can do 15-inch spacing, that’s probably the way you should go,” he says. “If you have 1,000 acres of corn, then it would almost justify buying a planter.”

In all this, caution remains a good idea. Another trial conducted in another year and under different growing conditions might produce different results. 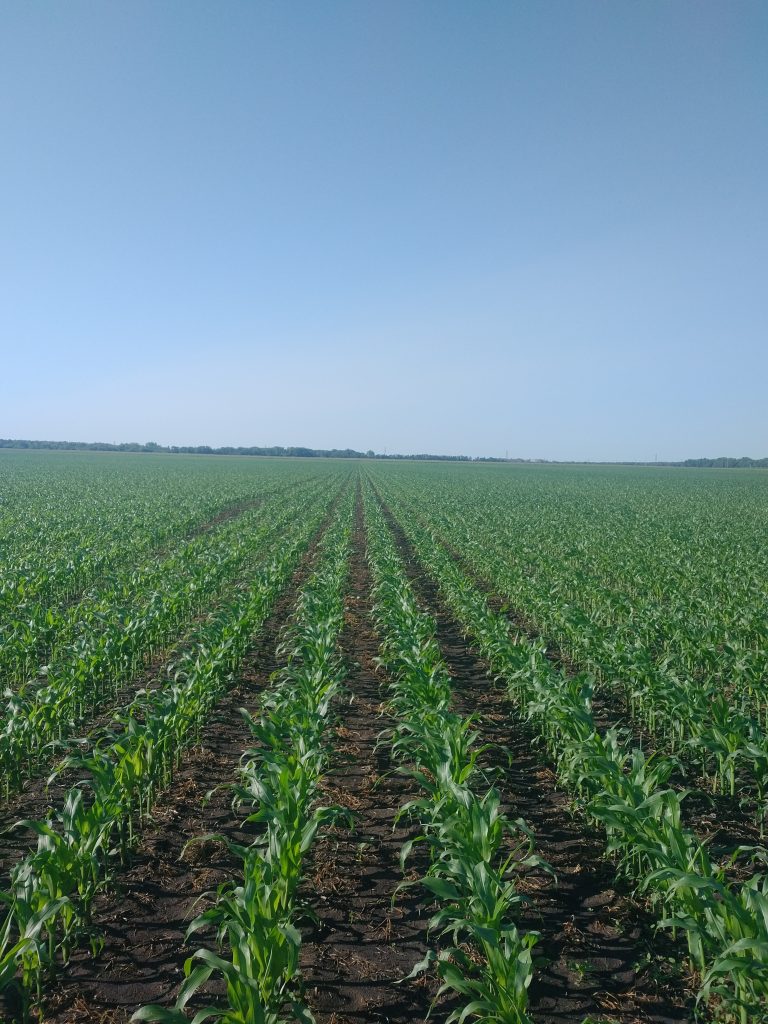