In parts of northeastern Saskatchewan, excess moisture and high water tables have prevented some growers from seeding certain fields in the Melfort area over the past few years. Water table levels have been monitored in the area since an observation well was installed in 1967, with the highest levels ever recorded in 2014. Water levels declined consistently from the mid-1970s until 2004, when they began to rise significantly through 2014. With the high cost of cropland, growers can't afford to not crop all of their acres.

“In 2014, a local area grower with land adjacent to the Melfort Research Farm contacted us to look into the potential of tile drainage,” explains Stewart Brandt, research manager with the Northeast Agriculture Research Foundation (NARF). “This 40-acre parcel, affected by excess water and salinity, had the Melfort Creek running through the quarter section. With grower investment and some additional funding (supported by the Agricultural Demonstration of Practices and Technologies [ADOPT] initiative under the Canada-Saskatchewan Growing Forward 2 bi-lateral agreement), we initiated a three-year project in the fall of 2014.”

As the first step before undertaking a tile drainage project, the landowner must contact the Saskatchewan Water Security Agency for approval. One of the most important factors is having a plan of where the water discharge from the tile drainage will be released, and to confirm that there is a viable outlet or point of adequate discharge, which means the amount of water being contributed from the tile drainage is insignificant compared with the amount of water flowing in the creek. For this project, the Melfort Creek provided the point of adequate discharge.

“Tile drainage is a long-term investment and requires careful planning and consideration,” Brandt says. “Getting professional design and installation support is recommended and for this project we worked with Northern Plains Drainage Systems Ltd. from Manitoba, who provided the design, engineering and installation. In late October 2014, we held a half-day workshop followed by a half day in the field learning about tile drainage installation.”

The costs for tile drainage vary depending on soil texture, design and installation requirements. On coarse textured soils, the tiles can be placed quite far apart, reducing costs, but in clay soils, the tiles need to be placed closer together at about 40 feet apart, which requires a lot more tile drainage material. For large areas or entire fields, usually the most efficient and cost-effective design is a parallel installation. In some situations, a targeted design can be installed for smaller problem areas where other parts of the field do not require drainage.

One of the most important components of the installation is developing the initial field elevation map. “Recent advancements in GPS technology have reduced the costs of generating an elevation map substantially,” Brandt says. “Instead of having to have a survey crew out to develop the elevation map, good elevation maps are easily generated with GPS technology, which also improves the efficiency and accuracy at installation. The major cost of the project is actually for the amount of tile drainage materials required and the installation. Typically the materials have had to be imported from the U.S., but more recently, a Canadian supplier is offering the materials.”

Regular monitoring of the tile drainage installation is part of the project and began as soon as the installation was completed in the fall of 2014. The water began to flow as soon as the tiles were installed and continued until freeze-up. It then started again in the spring of 2015. Except for a brief dry spell at the end of June 2015, the tile drain continued to run through the year. A large rainfall event at the end of July 2015 was successfully drained off the field and also reduced some of the salinity impacts at the same time. The rainwater flushed the salts down and out of the drain rather than allowing the salts to be pushed up through capillary action in the soil with excess water. “We monitored electrical conductivity [ECe] levels on the water coming out of the tiles in the fall of 2014, as well as the water in the creek. The initial ECe was 8,000 at the outlet and 9,000 in the creek, meaning the creek was more saline than the tile drains, which was a bit surprising. However, most of the creek flow in the fall is due to subsoil seep into the creek.”

In 2015, half of the field was seeded to canola and the other half, which was badly affected by salinity, was left in the permanent forage stand. Although there isn't previous yield map data for comparison, the canola yields in 2015 appeared to show a good response to the tile drainage. The grower was pleased with the results and removed the remaining permanent forage in the fall of 2015. The entire 40 acres was seeded to barley in the spring of 2016.

“By the end of June 2016, a fairly decent barley crop had been established and the productivity appears to be very good,” Brandt says. “We also have a reference area with two previous years of yield data outside the tile drained project that is badly affected by both salinity and excess moisture for comparison. The grower is very pleased with the results so far and is considering tile drainage installation on another 2,000 acres of cropland as time and investment allow.”

Similar to previous findings in Manitoba, this project is showing several benefits to tile drainage, although some are difficult to quantify in terms of economics. “Removing the excess water not only improves the water use by the crop but it also creates temporary storage for water from rains and spring runoff in the field,” Brandt explains. “It doesn't decrease the total amount of water going into the stream, but it delays peak stream flow after a rain. Other benefits include more timely field operations, earlier start to seeding, less crop drowning out, less compaction and better access, timing and utilization of fertilizers and pesticides. All of these factors have a big impact in particular in areas like northeastern Saskatchewan where we tend to have a very narrow window for seeding and harvest and timeliness of operations is critical.”

Brandt has received a lot of calls about this project and believes it has probably generated the most interest he has ever had on a project. There is lots of interest in tile drainage projects in the area and all along the east side of the province. Planning ahead, getting necessary approvals and being able to plan for installation after harvest if conditions allow are the key. 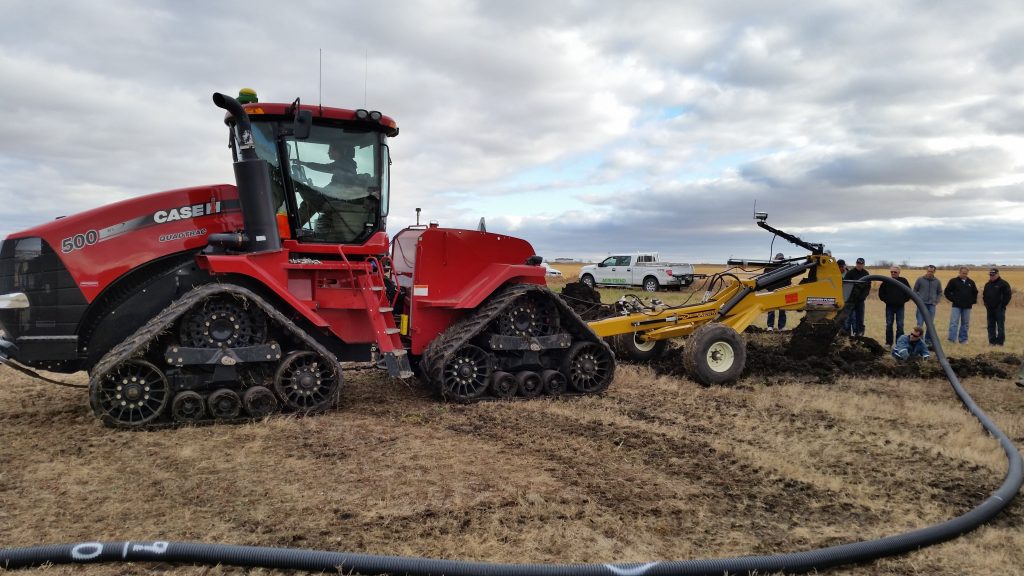