If you read about neonicotinoids in the news, the context is likely the impact of this class of insecticides on pollinators. But according to Christy Morrissey, an associate professor at the University of Saskatchewan, there’s another side of the story that’s been neglected in the mainstream media.

Since 2011, Morrissey has been studying the impact of neonics on Prairie wetlands. More specifically, she’s been charting the extent to which wetlands could be contaminated by neonic residues, and the impacts on invertebrate life that form the basis of the food web, as well as effects on bird populations in those wetlands.

“We were interested in wetlands in the Prairie pothole region because of their ecological significance,” she says. “There’s an obvious interaction between water and agriculture in this region of Canada.”

Morrissey and her graduate students have analyzed hundreds of wetlands in the Prairies, and have bird studies at five sites in a range of landscapes across Saskatchewan. Almost all of these sites are located on private land. Morrissey says most farmers are receptive and interested in her work.

“Most people genuinely think the chemicals they’re using are safe because they’re on the market and they are generally following guidelines as to how to apply them,” she says. “It’s the guidelines that we believe are flawed. They aren’t necessarily as safe as [people] were led to believe they are. They do say you shouldn’t use the chemicals near water, but that isn’t possible in the Prairies.”

Last year, Morrissey co-authored a review paper looking at neonicotinoid use in more than 230 studies to come up with guidelines for safe levels. In Prairie wetlands, she says, the levels routinely exceed guideline levels researchers would set as being safe.

“These compounds are extremely toxic at very, very low levels — 1,000 times more toxic to an insect than DDT [dichlorodiphenyltrichloroethane]. At these low levels, and because the compounds stick around for a long time, that is enough to cause effects on native aquatic insects,” she says.

Main studied 16 agricultural fields on a single farming operation, each of which had at least one wetland collecting runoff from a surrounding field. He took samples of top and bottom snow, particulate snow and wetland water. “In the wetland water you could be detecting up to 200 nanograms of neonicotinoids per litre, but for meltwater it could be 489 nanograms per litre. The mean was something like 170,” he says.

“Prairie wetlands are 85 to 90 per cent formed by snowmelt, so these pothole wetlands were accumulating this runoff,” he explains. “Meltwater is scouring the surfaces of the fields where there is some residual insecticides that are persisting. In the spring, the residues are being washed in as these basins are filling with water.”

Depending on the chemical, the half-life of some neonicotinoids (including clothianidin) is about three years, Morrissey says. Neonics are highly water-soluble and re-mobilize when water pools.

Francois Messier is the owner of a 10,000-acre farm near Saskatoon, where Main conducted the study. He grows canola and cereals (including barley, wheat and oat), of which only canola seed is treated with neonicotinoid insecticide.

Messier, once a wildlife ecologist at the University of Saskatchewan, now makes his operation available to university collaborators for studies such as Main’s.

For Messier, the use of neonicotinoids is unavoidable when it comes to canola. “The impact of flea beetles could be so devastating,” he says. “The average seed cost is about $75 per acre, and you don’t want to lose the crop right off the bat. I don’t think there is an alternative to using insecticide.”

But Messier says a distinction must be made between canola systems and cereal systems. He believes neonics are used preventatively against wireworms in cereal crops but in most cases are unnecessary. “I never use any insecticidal seed treatment on my cereal seed, and I would put my yield against anyone else’s in my neighbourhood,” he says.

Real-farm implications
Morrissey says the biggest take-away from the research is that neonicotinoid insecticides should never be used as an “insurance policy” due to the potential long-term negative effects, such as the development of resistance. “A, it’s expensive,” she says. “And B, it’s a toxic chemical that is environmentally concerning.”

Over the next few years, Morrissey hopes to connect the research community with farmers in the Prairie pothole region in a new “resilient agriculture” project that will develop and implement sustainable practices at a field scale. The project will aim to find strategies to keep crop yields high and environmental impacts low, with farmers as the key decision-makers.

“The information farmers are getting is almost all from seed and chemical companies that are selling them a product,” Morrissey says. “That’s not all the information out there.

“The word hasn’t gotten out to producers as much as I would like. They need to know this information more than anyone,” she adds. 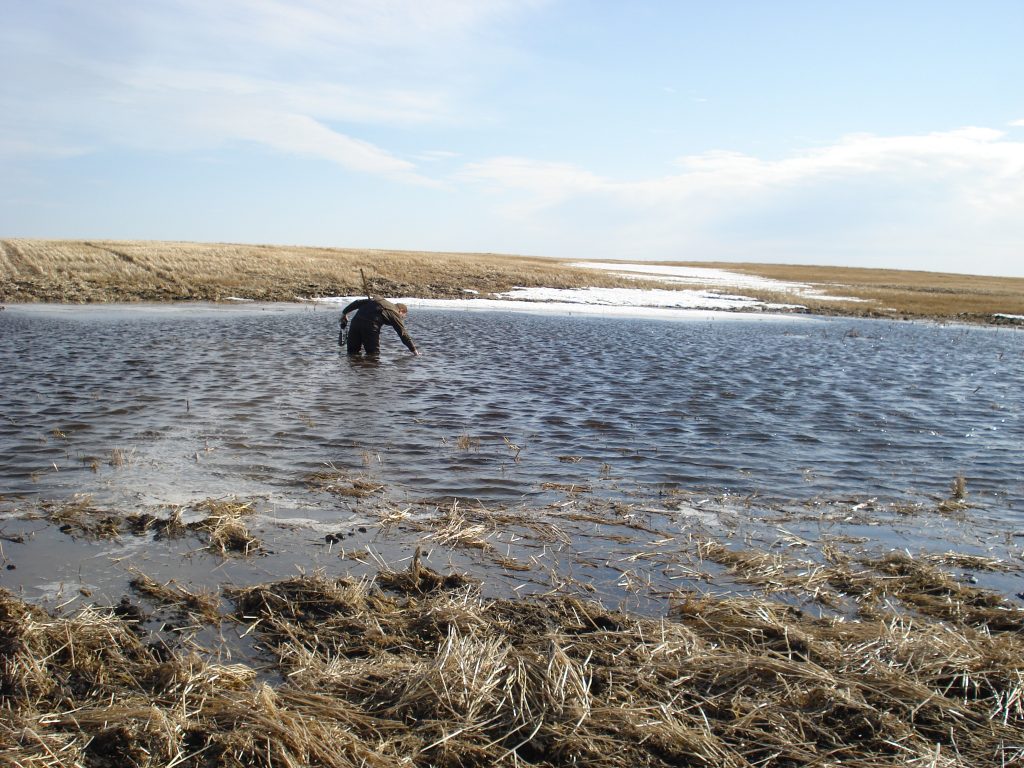