With the high risk of disease in very short crop rotations, many Prairie growers these days have questions about how to most effectively use fungicides and seed treatments. So Kelly Turkington, a plant pathologist with Agriculture and Agri-Food Canada (AAFC), is leading a project to help answer some of those questions for malting barley growers.

The project is assessing the impact of seed treatments, plant growth regulators (PGRs) and/or fungicide timing on crop disease levels, grain yield, microbial populations on the grain, and malting quality.

Turkington explains this project builds on past research and observations. One of his research interests is the role of seed treatments in cereal disease development. Back in the late 1990s, he did some preliminary work in the growth cabinet to see if seed treatments affected early-season leaf disease development. “We saw some activity of a product that is not registered any more in terms of protecting the second or third leaf of a seedling from barley scald.” Then in 2012, when Turkington was visiting some barley scald and stripe rust trials in Australia, he was intrigued to see that the plots with only a seed treatment had noticeably better leaf disease control than the untreated plots well into the growing season. So he wanted to explore that possibility under Canadian conditions.

He adds, “We get lots of questions about early-season disease development in wheat and barley, especially in tight rotations like canola-wheat-canola-wheat, or canola-barley-canola-barley, or in continuous wheat or continuous barley, because the disease risk is high. So [in our current project] we wanted to look at strategies to try to address some of that early-season disease development.”

Another longstanding area of interest for Turkington is the timing of fungicide applications. His previous research has shown herbicide timing is not a very good option for applying a fungicide because it won’t directly protect the upper canopy leaves, which are crucial for grain filling and yield. An application at the flag-leaf stage or at head emergence is much more effective. Now growers often ask whether it’s better to spray at flag-leaf or wait until head emergence.

In his present project, Turkington wanted to determine if a seed treatment would provide enough leaf disease control to perhaps allow a grower to delay a fungicide application until head emergence. Also, he wanted to compare the effectiveness of a flag-leaf application alone, a head emergence application alone, and applications at both timings. He notes, “In more favourable and higher yielding environments, like New Zealand or perhaps the U.K. or Europe, often growers need to put on a fungicide at flag-leaf, or maybe slightly before that, and then again at head emergence to prolong the protection of that upper crop canopy and provide some suppression of Fusarium head blight.”

Turkington included PGR treatments in the project for a couple of reasons. PGRs are used to shorten and stiffen plant stems as a way to reduce lodging, and could influence microbial growth. “If a crop is lodged extensively, the heads are down in the canopy, close to leaves that may be carrying the net blotch, scald or spot blotch pathogen. And they’re in a humid environment and may be more prone to have more extensive microbial growth on the developing head tissue and kernel tissue,” he explains. “One of the characteristics that maltsters and brewers look for in barley is a reduced risk of having a lot of microbial growth on the grain – they often refer to that as ‘microbial load.’ Microbial load can have implications in the malt house and the brew house.” 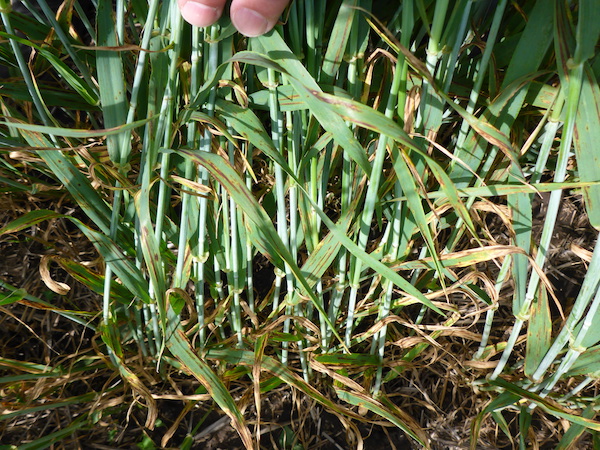 Crop diseases, like this net blotch on an untreated check plot in the trial, may contribute to the microbial load on the grain. Photo courtesy of Kelly Turkington.

The seed treatment used in the project is Insure (triticonazole, metalaxyl and pyraclostrobin), and the fungicides are Twinline (metconazole and pyraclostrobin) at flag-leaf, and Prosaro (tebuconozole and prothioconazole) at head emergence. The PGR is Ethrel (ethephon); it is currently registered for use on wheat, but not on barley.

Turkington’s project team is collecting data on such factors as disease severity ratings, the level of lodging, grain yield, 1,000-kernel weight, bushel weight, plumps, thins, and so on. As well, harvested grain samples from the plots are analyzed to determine the microbial load on the grain and the malting quality. Tom Graefenhan, a mycologist at the Canadian Grain Commission (CGC), is leading the microbial analysis, and Marta Izydorczyk, a barley scientist at the CGC, is leading the malting quality research.

The project’s sites are at AAFC research locations across the Prairie region, including Beaverlodge, Lacombe and Lethbridge in Alberta; Scott, Indian Head and Melfort in Saskatchewan, and Brandon, Man. The project also has a site at the AAFC research centre at Charlottetown. All the sites are using AC Metcalfe – a well-known malting variety. 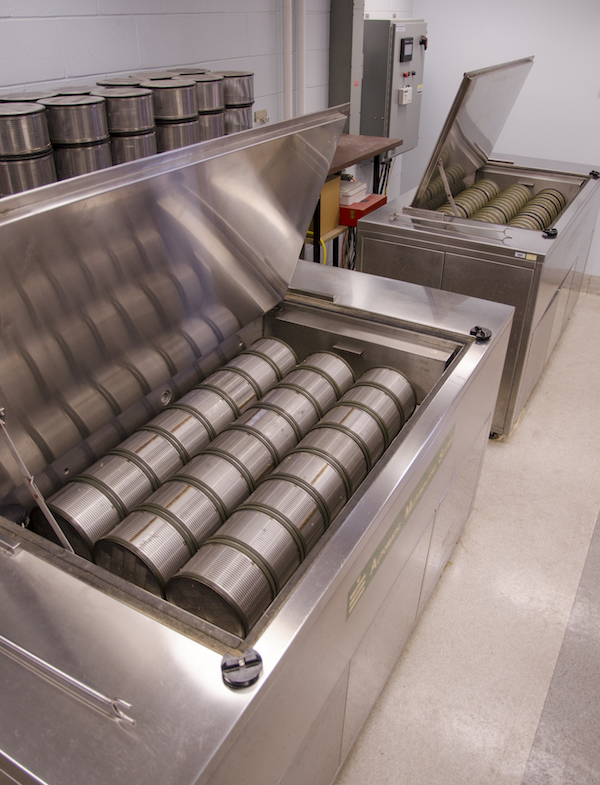 As part of the quality evaluation for the project, the barley samples are malted in a micromalting system at the Canadian Grain Commission. Photo courtesy of Marta Izydorczyk.

Preliminary results
Turkington highlights some of the key results from the first three years of the agronomic component of the project.

The impact of the seed treatment on disease levels in the upper canopy and on yield has been variable. “We have seen some positive aspects of seed treatment but not at all sites. Where we’ve had some benefit perhaps has been where we’ve had a higher level of disease development, which was especially Melfort in 2013 and to a certain extent in 2015,” he notes. “However, we didn’t see a synergism between using a seed treatment and using either a flag-leaf stage or a head emergence stage fungicide application.”

It’s possible the variability in these results reflects the fact that the project wasn’t able to get the particular seed treatment product that was used in the 2012 Australian trials. Turkington is hoping to test that product in some of his future work.

“The key factor in terms of controlling leaf disease development in the upper canopy was either a flag-leaf stage application or a head emergence stage application,” he says. “Looking at the data over the last three years, the head emergence application tended to be somewhat better, but it wasn’t necessarily always statistically better than the flag.” Reduced disease levels from a fungicide treatment resulted in higher grain yields.

He adds, “We haven’t seen a huge benefit of applying fungicides at both the flag-leaf and the head emergence stages, although there were some hints of it at sites that had really high disease pressure.”

For the most part, the PGR treatments had an impact only at sites with a significant risk of lodging. “The best example of that was 2013 at Melfort. They had a moderate level of lodging, and applying Ethrel significantly reduced lodging and that translated into better yields. In other years and other sites where the risk of lodging was lower or nonexistent, we really didn’t see a huge impact of using a PGR,” Turkington notes. Overall, the PGR applications did not have a strong impact on disease levels on the leaf tissue. The results for the microbial levels on the grain are still to come.

Analyzing microbial loads
Graefenhan explains the microbes found on barley kernels reflect the microbes in the environment surrounding the barley field. They usually include a wide range of bacteria, yeasts and fungi, including some plant pathogens. He says most, if not all, microbes on the grain are killed during the malting process, especially in the kilning stage when the grain is heated to a high temperature. However, some substances produced by the microbes do remain on the malted grain and may get transferred to the next stages in the beer-making process. For example, some fungi, such as Fusarium, produce proteins that can cause gushing (when beer gushes out of a beer bottle).

To analyze the microbial communities on the barley grain, Graefenhan’s lab first washes off all the microbes sitting on the surface of the seed. Then they extract the DNA of all of those microbes. Next, instead of sequencing the entire genome of each microbe, they look at a segment of the DNA that encompasses the “genetic barcode,” a short sequence of the DNA that identifies the species of the microbe.

“These genetic barcodes are unique for each of the microorganism species we’re dealing with. The barcodes are very accurate and specific. We match them against a reference database that has [the most well-known] fungi, bacteria and yeasts,” Graefenhan says.

“The method is very sensitive, so just because we detect a particular microorganism, that doesn’t necessarily mean it was vigorously growing on the plant. There are a lot of ubiquitous organisms out there in the environment, in the air, on the trees surrounding the fields, on the grasses, and they do spread out onto the grain as well,” he notes.

“In our study, we take subsamples of 15 to 25 grams of seeds. On those 25 grams that we extract DNA from, we have hundreds of different microorganisms.”

Along with identifying the different species, the DNA analysis also provides an indication of the species populations in the sample. “It gives us a good hint of how many of each of these organisms are there, whether there was just a single cell or a single population, or whether there was a diverse, growing population on the seed. By the number of DNA sequences from each of the species, we can tell whether it was a predominant species or just a single event.”

Although most of the microbial results are too preliminary to make any general statements, it does appear that the geographic location of the sites is an important factor. Graefenhan explains, “Geographic location is always tightly linked to precipitation. For example, in the Red River Valley in Manitoba, precipitation is almost twice as much as in parts of Alberta. That is also reflected in the microbial composition and load on the grain. In general, we find more microbes in areas where the precipitation is higher, like the eastern Prairies in Manitoba and Eastern Canada.”

The malting quality analysis is evaluating properties that are important for malting and brewing. Turkington expects to get a clearer picture of the microbial load and malting quality results over the next year as those analyses continue. The project’s agronomic fieldwork will be completed this year.

This project is funded through the Growing Forward 2 National Barley Cluster, with support from AAFC, Alberta Barley, Western Grains Research Foundation, Rahr Malting, and the Atlantic Grains Council. AAFC scientists and especially the technical staff at the field sites are helping with these trials. 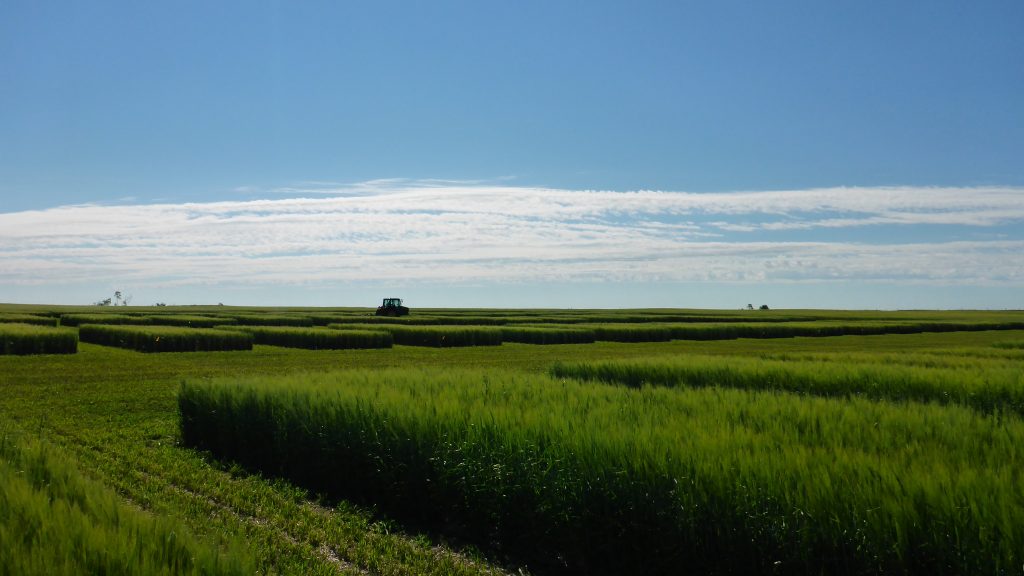