Findings from an Alberta baseline survey for an emerging concern. 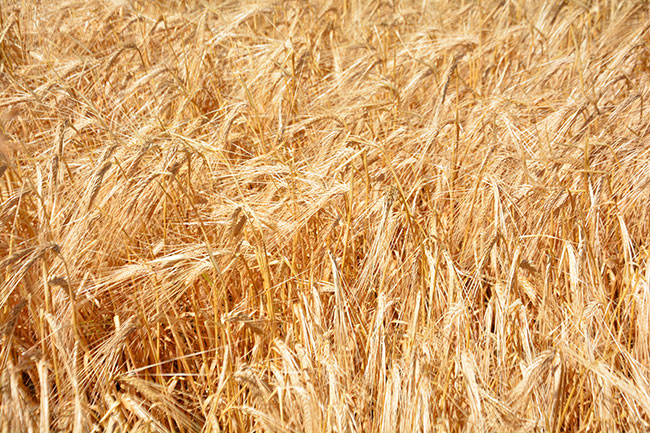 It has been reported that cereal cyst nematodes can cause up to 50 per cecnt yield loss in winter wheat and barley, and complete crop failure in spring wheat. Photo by top crop manager.

Cereal cyst nematodes (CCN) are very small, soil-dwelling pests with the potential to cause big impacts on cereal crop yields. These nematodes are gradually spreading in the western United States and could become a concern for Prairie cereal growers. So Shabeg Briar recently conducted a small survey to collect baseline Alberta data on this emerging issue.

“I wanted to have a quick look at what is going on and keep an eye on this issue,” explains Briar, a research agronomist at Olds College Centre for Innovation in Olds, Alta.

CCN are spread by the movement of infested soil on field equipment, boots, root crops, and so on. The first report of these nematodes in western North America was in western Oregon in the 1970s. Since then, CCN have become well established in the cereal-growing areas of the Pacific Northwest states of Oregon, Washington and Idaho and have spread to other states including California, Michigan, Colorado, Utah and Montana. Two CCN species have been identified in the region: Heterodera avenae, which is the most common, and Heterodera filipjevi.

In severely infested fields in the Pacific Northwest, CCN have been reported to cause up to about 50 per cent yield loss in winter wheat and barley and complete crop failure in spring wheat.

Before he came to Olds College, Briar was a research scientist at Montana State University’s Montana Agricultural Experiment Station, where he worked on nematology research. In Montana, Heterodera avenae was first found in 2006 and Heterodera filipjevi in 2015, so Briar is familiar with these nematodes, the damage they can cause, and the risk of their spread.

“Since I started working at Olds College Centre for Innovation in 2018, I was always thinking that if the cereal cyst nematode is moving north, Alberta may have some fields already positive for this pest. So I submitted a proposal to the Alberta Wheat Commission for a small study for one season,” he says.

“Because I was going to sample for cereal cyst nematodes, I decided to also look at the population levels of another important type of plant-parasitic nematode called root lesion nematodes; those
nematode species belong to the Pratylenchus genus. They have been reported in Manitoba, Alberta and several other Canadian provinces.”

A few basics
“Nematodes are very tiny roundworms, and they are present in every environment – in soil, plants, water,” Briar says. “The majority of nematodes in the soil are actually beneficial; they mainly help with organic matter decomposition and release of nutrients. However, some species can be parasitic to plants. Several of these plant-parasitic nematodes, including cereal cyst nematodes and root lesion nematodes, are important worldwide, and they can cause huge crop losses.”

CCN can infect the roots of cereal crops such as wheat, barley and oats, as well as grassy weeds. The nematodes steal nutrients from the plant and impede water uptake, resulting in poor plant growth.

“Cereal cyst nematodes undergo one reproductive cycle per growing season,” he explains. In general, CCN juveniles hatch in the spring. “After hatching, infective juveniles enter the roots of a susceptible host plant and start feeding. The males come out of the root system, but the females embed themselves in the root.”

The females become enlarged inside the root. By about the flowering stage of wheat, the female bodies are visible as glistening white cysts about the size of a pinhead protruding from the root.

The males fertilize the females, and each female carries several hundred eggs. Upon crop maturity and death of the root system, the female dies and her body forms a hardened dark-brown cyst around the eggs. The hardened cyst, which eventually drops off the root, provides a protective shell to help her offspring survive in the soil until a plant host is available. The eggs inside the cysts can stay viable for many years.

CCN infestations can be tricky to identify. When the nematode population is low, the crop may not have any obvious symptoms. In highly infested plants, above-ground crop symptoms may include stunting, yellowing leaves and fewer tillers. The affected plants tend to occur in patches in a field.

Briar emphasizes, “The above-ground symptoms can be easily confused with the symptoms for lack of nutrients, lack of moisture or other problems [such as Rhizoctonia root rot].”

Below-ground symptoms include the cysts and shallow roots. Once the cysts turn brown and fall into the soil, they are very difficult to see. In wheat and barley, the roots may develop a bushy, knotted appearance. CCN feeding damage may make the plant more susceptible to other root pathogens, which may also make it hard to diagnose the nematode infestation.

Root lesion nematodes (RLN) are able to infest a wide range of plant species including crops such as cereals and pulses as well as common weeds.

“There may be four to five generations of root lesion nematodes within one crop growing season. The infective juveniles enter the root system. These nematodes don’t stay in one place, and they don’t form cysts. Instead, they move around as they feed on the root. As the crop matures, they may leave the root system or they may stay inside it for protection from dehydration or dry conditions,” Briar says.

“As their name says, they form lesions on the root, and they reduce root growth. The root damage predisposes the root system to other pathogens like Rhizoctonia or Pythium.” An RLN-infested cereal crop will have patches of poorly growing, yellowing plants, similar to the above-ground symptoms for many other soil-related problems.

About the survey
Briar’s survey, which was conducted in 2020, primarily targeted spring wheat fields, but also included some winter wheat fields and a few barley fields. The survey focused on fields with a history of low cereal yields in spite of good management practices.

“We contacted wheat growers through our personal contacts, some research entities, and the Alberta Wheat Commission, so we could get permission to enter the growers’ fields and collect samples. We surveyed about 41 fields in southern Alberta. We also collected some samples from central Alberta. In addition, several applied research associations in northern Alberta sent samples to us from that region,” he says.

Briar and his team collected root and soil samples from each surveyed field. For the root samples, they dug the roots out of the soil carefully to avoid knocking off any cysts. They looked at the roots with the naked eye to search for any cysts, lesions and other root symptoms. Then they gently washed the roots and examined them with a low-power microscope to look more closely for any symptoms. They collected about 10 soil cores per field, mixed those cores and took a representative sample for the field. They divided that representative soil sample in half, using one half for RLN analysis, and the other half for CCN cyst extractions. 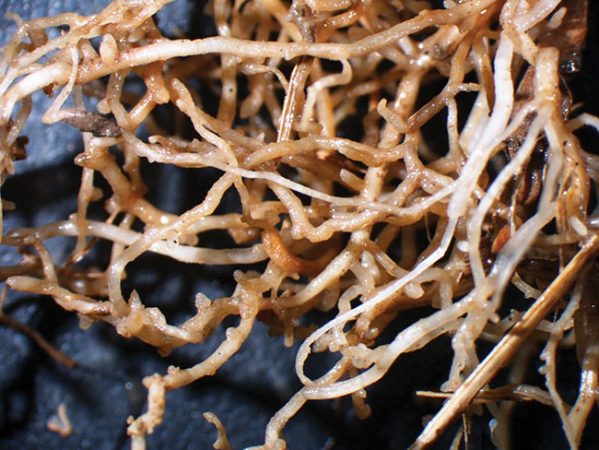 Key findings and next steps
“We did not find any cereal cyst nematodes, which is good news,” Briar says.

“However, I have to emphasize that trying to find a very low infestation of these nematodes is like looking for a needle in a haystack. This was a very small survey and the southern Alberta wheat-growing region is a vast area so it would be very easy to miss a small infestation.”

“For root lesion nematodes, as expected we found pretty high populations in some fields particularly in southern and central Alberta,” he says. “These nematodes were widespread. We found them in 73 per cent of the samples in southern Alberta. However, we did not find any in northern Alberta; one reason might be the cold conditions there.”

Briar would like to see these surveys continue as a way to watch for nematode problems so cereal growers can take action if necessary. He also says changing climate conditions could influence the distribution of CCN and other plant-parasitic nematodes, another reason to monitor the situation.

As well, Briar has submitted a proposal for a joint project to explore whether root lesion nematodes, or plant-parasitic nematodes in general, might be making wireworm problems more severe in southern Alberta wheat crops. In the future, he would also like to identify the prevalent RLN species in Alberta cereal crops, which would be helpful if their population levels are high enough to require some control measures.

Tips for growers
Briar recommends that cereal growers be on the lookout for CCN. “If you see a wheat field that is performing poorly despite good management, then something may be going on in the soil. But that could be many things.” A first step would be to work with your agronomist or crop pathologist to look at the below-ground and above-ground symptoms to try to identify what specifically is causing the problem.

“The only way to know for sure if a soil or crop is infested with nematodes is to have the samples analyzed,” Briar notes.

In Alberta, the Alberta Plant Health Lab (APHL) will be willing to accept cereal root samples for CCN testing starting in 2022. A soil sample testing option will follow sometime later. For inquiries about submitting CCN samples for testing, contact the APHL at planthealthlab@gov.ab.ca or 780-644-3436 (Jie Feng, APHL lead).

“If we do find cereal cyst nematodes in a field, there is no need to panic because once we have identified the problem, then we can do something about it,” Briar says. “On the other hand, if we don’t know about the problem and it goes undiagnosed, then it could become more widespread.”

Practices for managing CCN include adding non-host broadleaf crops like canola or pulses into a cereal rotation, controlling grassy weeds, and using sanitation measures like cleaning soil off field equipment and boots before leaving a field in order to limit the movement of infested soil. Also, breeding and variety testing programs could identify CCN resistant or tolerant cereal varieties.

Briar concludes, “It may be just a matter of time before we find a few fields that are positive for cereal cyst nematodes. So continued study and keeping an eye on the issue will be important.”