Volunteer canola is becoming a bigger weed management challenge for canola growers, particularly where high frequency rotations are in place. Recent weed surveys in Saskatchewan show volunteer canola has moved up on the list of most common weeds, from the low 30s in the 1980s to number 14 and higher today.

“Volunteer canola can be problematic for canola growers even though we don’t always think of it as a true weed,” Christian Willenborg, assistant professor with the department of plant sciences at the University of Saskatchewan says. “Volunteer canola creates a lot of risk and negative issues, even in a canola crop itself.”

As a weed, volunteer canola competes with the crop for nutrients and can make those nutrients unavailable to the crop. Typically, volunteers don’t make a positive contribution to yield because they reduce crop yield and don’t return the same yield relative to the crop. As well, because volunteer canola is the result of a different hybrid generation, there can be hybrid breakdown and loss of positive traits.

During the cropping season, volunteer canola creates other management challenges. Because volunteer canola is not treated, it presents the risks of developing seedling disease and increased flea beetle pressure. In non-canola years, volunteer canola can serve as a host for serious diseases such as blackleg and clubroot, reducing the effectiveness of rotation in managing those diseases. Volunteer canola often flowers and matures at different times than the crop, making harvest timing and management more difficult, particularly for growers looking at straight cutting. Early maturing volunteers can also return seed back to the seedbank, which continues to increase the problem of volunteers.

“One of the best ways to manage volunteer canola is to lengthen the crop rotation,” Willenborg explains. “There is evidence from some of our studies at the university suggesting volunteer canola is a major problem of tight canola rotations. Extending that canola rotation beyond continuous canola or every second year to a minimum of three years is recommended. A four-year rotation is even better, with the three years intervening the canola crop providing better opportunities to manage volunteer canola and other weed and disease concerns.”

Willenborg points to research work conducted by Rob Gulden, now at the University of Manitoba, that looked at the persistence and issues of secondary dormancy of volunteer canola seeds. “His work showed that 44 per cent of canola seeds disseminated or replenished in the seedbank will persist for one winter, 1.4 per cent for two winters and less than 0.5 percent for three winters. Therefore, a three- or four-year rotation will help growers minimize the seedbank inputs and diminish the volunteer canola population over time,” he says.

Reducing harvest losses is critical to minimizing seedbank inputs. Generally, harvest losses for canola can average one-half bushel per acre, which is actually five times the seeding rate. Therefore, trying to minimize harvest losses as much as possible is critical to reduce seed return to the seedbank. Also, avoiding tillage in the spring to allow for maximum volunteer canola emergence is important. Tillage can actually put the volunteer seeds in favourable microsites for germination as well as induce seed dormancy.

For controlling volunteer canola, both a preseed and in-crop treatment will be a critical strategy for control. The type of control may differ year-to-year depending on rainfall and other factors. “Volunteer canola control can require a herbicide with some residual control, or multiple herbicide applications with products that lack residual control, as there can often be multiple flushes during the growing season,” Willenborg explains. “Therefore, a pre-emergent application may miss some of the later emerging weeds, but if you wait for in-crop control, some of the early emerging volunteers may be too large by the time the post-emergent application is made. Think about volunteer canola when you are selecting products for the other weeds in your field.”

One of the best strategies for managing volunteer canola prior to a canola crop is to plant a cereal crop. Cereals provide a broad range of herbicide options, both preseed and in-crop, that can provide good control. Willenborg explains should stacked volunteers (tolerant to more than one herbicide) become a problem, growers can still get very good control with products registered in cereals. “Using 2,4-D or MCPA, or using any of the various products available that can be tank-mixed with glyphosate preseed before wheat or barley, often provide control. Pre-emergent glyphosate with a tank-mix partner is key to managing volunteer canola in combination with whatever herbicide resistance system a grower is using,” he says.

Because volunteer canola can create a green bridge for diseases and other pests, growers need to minimize weed seed return of volunteers and try to eliminate volunteers from those crop rotations. “For a disease like clubroot where the incidence is increasing, volunteer canola can serve to perpetuate that problem,” Willenborg says. “Therefore, it is absolutely critical that growers with clubroot problems or other serious disease issues control those volunteers and really employ, if they can, a zero threshold strategy for volunteer canola. Certainly the tighter the canola rotation, the more difficult eradication or minimizing seed set from those volunteers is going to be.”

Another strategy to control volunteer canola includes diligent field scouting. Scouting rotational fields, and even those ahead of canola for volunteer canola not controlled by herbicide application, is important. “Early detection allows time for control of those volunteers before seed set,” Willenborg says. “Leaving canola seeds on the soil surface after harvest and delaying any tillage operations for a few weeks gives seeds time to germinate in the fall. Seedlings emerging in the fall are unlikely to survive the winter. In addition, during that time, birds and insects, especially carabid beetles, will actually consume a lot of those seeds.”

Good rotations of both crops and herbicides are needed, not just for weed management overall, but also for control of volunteer canola. “Extending the crop rotation, growing canola less frequently and using integrated weed management strategies helps to reduce volunteer canola and the associated production risks,” Willenborg adds. “Rotation among herbicide-tolerant systems and use of preseed herbicide timing in addition to in-crop application helps improve weed management and reduce the risk of developing herbicide-resistant weeds. Growers should try to start with a clean field and stay with a clean field by controlling weeds extremely early and right through the growing season.” 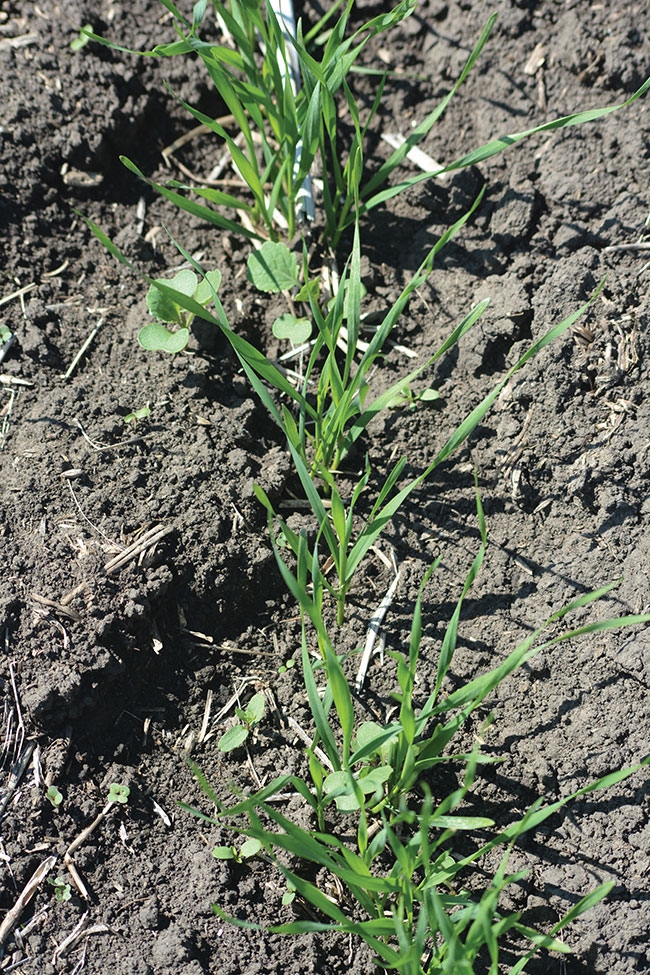