There’s a spirit of unity converting farmers across the nation, thanks to a group of industry representatives challenging farmers to change their ways and start speaking out for agriculture in harmony. 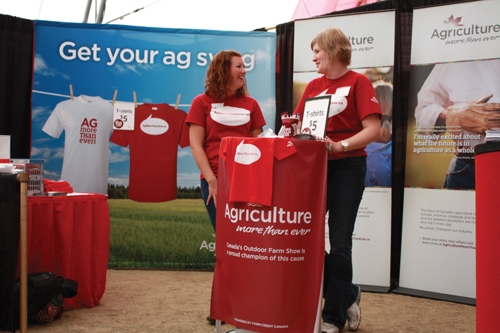 Ag More than Ever has been seen across the country at events and shows. There’s a spirit of unity converting farmers across the nation

Agriculture More Than Ever is a movement that was first started by Farm Credit Canada (FCC) in May and has grown to include more than 40 industry partners committed to promoting the cause. Frustrated bymainstream media’s portrayal of farmers as either hillbillies or fat-cats, the campaign’s creators agreed the public needed to see farmers as they really are. Greg Stewart, FCC’s president and chief executive officer, says there’s been a growing feeling that agriculture’s public image needs for a facelift for quite some time and FCC’s message has been received with enthusiasm.

Stewart says it’s no secret that the industry hasn’t done the greatest job of sticking up for itself in the past. Although that may have been acceptable in the past, we simply can’t afford to keep staffing the industry “in house” in light of the growing global demand for food and the declining numbers of primary Canadian producers. Overcoming the negative portrayal of farming in the media, sometimes even by farmers themselves, is now more important than ever to ensuring the continued success of the industry, says Stewart.

“We need the best and the brightest in agriculture, and the more people are uninformed about agriculture, the less chance we’re going to attract talent,” says Stewart. “Given what you would have heard, you may not think [agriculture] is a great place to start a career and we know that’s not true.”

Stewart says the future for agriculture has never looked brighter but that message isn’t getting out there and the best people to deliver that message are farmers themselves. Jim Snyder is the national director of agricultural practice development for campaign supporter BDO Canada, and he believes farmers are equally frustrated by the public image. He thinks farmers are reluctant to really speak out for two reasons: it goes against the current culture of humility in the industry, and some farmers may have only limited experience in public speaking.

“We come from a culture that says we would rather be judged by our actions than our words,” says Snyder. “When we all get a little bit more confident and competent in having these conversations, hopefully we can do something to change the perception of the other 98 percent.”

Snyder also suspects some farmers don’t consider themselves to be specialists or experts in their field. But focusing less on expertise and speaking solely about their passion for the industry and their vision of the future as eternal optimists can still do a lot of good. Stewart says he rarely comes across a producer who honestly regrets choosing a career in agriculture, and it isn’t too difficult to press most into admitting that these days. He thinks it’s a really good time to showcase the level of talent and the technology that’s needed to run a modern farm, as well as how much farmers care about animal welfare and the environment. But he says it’s a realization all farmers have to come to.

“We can’t expect the public to respect agriculture unless we’re willing to respect ourselves first,” says Stewart. “Pay attention to what you say about agriculture, speak up and speak positively about the industry.”

Stewart says it’s not uncommon for farmers to become almost apologetic in their discussions with him when they talk about their successes in recent years. While he admires that many don’t want to be boastful, Stewart says the tendency to gravitate to discussions about what could be going better, whether it’s markets or weather, is having a negative impact on the industry’s image. It’s hard to quantify just how much damage is done by negative banter about that “greedy neighbour buying all the land” or rival commodity groups but he suspects it’s not nearly as harmless as people may think. Kim McConnell, the founder of AdFarm, a company which is also a campaign partner, believes this destructive behaviour undermines the trust that studies show most consumers already have in farmers. He believes that if farmers can learn to speak well of the industry, and one another, there’s a real opportunity to fight back against ill-willed activists who target agriculture.

“The people who are against our industry are bloody good and they know how to articulately get their message across,” says McConnell. “Well, we can be the same and, to be quite honest, we can be better.”

Roberta Galbraith is an example of a farmer who can be a great spokesperson for the whole industry. She farms 3,000 acres of grains and oilseeds near Minnedosa, Manitoba, with her husband, Neil, and son, Ryan, and she works for the Manitoba Canola Growers Association. She believes it’s better for farmers to engage one another instead of competing with one another, and for them to become more understanding and empathetic to one another’s plights. Her secret to positively representing all farmers is to focus on the commitment that other farmers have to their own operations and recognize it as the same passion she has for her own farm.

“I’m still an advocate for agriculture regardless of whose story it is because it’s a great industry to be in,” says Galbraith. “Collectively we have a voice that’s much stronger together.”

Galbraith admits that she sees, as an industry, how we do get a little insular at times. She points out that it’s not the consumers’ fault they’ve become so far removed from the farm but more a result of modern agriculture’s ability to replace so much physical labour through mechanization. But Galbraith says farmers need to engage with consumers and explain not only how their food is produced, but also why it’s being produced that way. Even if it means taking the conversation beyond personal comfort zones.

“We’re passionate about the production of food and believe in what we’re doing, so when we get asked questions it’s sometimes difficult to separate the production, and the science, from the passion of growing food,” says Galbraith. “It’s easy to talk to other farmers but it’s not to other people because they’re not speaking from the same frame of reference.”
Galbraith offers explaining farm finances as a perfect example of a consumer’s frame of reference being a critical obstacle. Many consumers can’t understand how a farmer could invest thousands of dollars every spring and hope it pays back dividends each fall, when they’ve always relied on a paycheque coming every two weeks. But it doesn’t stop them from trying. Galbraith says she finds it really interesting that when she says she’s a farmer, everybody seems to want to share their familial connection to a farm, whether it’s a grandfather or a great uncle. It tells her that many consumers not only want to engage in discussions about farming, but also want to connect to what they must believe is a great way of life. But it’s a life, and a business, farmers are generally very good at and should be proud of, says Snyder.

“Do not sell yourself short on what you know about your business; nobody knows your business like you do and you should be very proud of it,” says Snyder. “I mean, what more honourable profession could there be in the world than the production of food?”

Both Snyder and McConnell agree that their lives have been enriched by their agricultural experiences and, like many farmers, can’t imagine having made a career for themselves in any other industry. Today there’s a whole generation out there with no one in their lives to teach them how rewarding a life and love of agriculture can be. With so many to reach, McConnell says the only hope to spread the message is through many voices working together.

“We have the opportunity to share this great story, to address the issues and misperceptions and to further advance the story to make it successful for a long time,” says McConnell, “and whether we make it happen or we don’t, probably rests with us, not with anybody else.”