The development of sclerotinia stem rot in a canola crop is like a complicated dance between the fungus’s life cycle and the crop’s growth stages, with environmental conditions, especially moisture levels, driving the dance and affecting whether the disease will be mild or severe.

In many areas of the Prairie Provinces in 2012, conditions favoured sclerotinia stem rot. But who knows what the situation will be next year? The variability in sclerotinia levels from year to year and from region to region is a key challenge in managing this disease.

Sclerotinia stem rot is a major disease of canola in Western Canada. When disease levels are high, it can cause greater than 50 percent yield losses. Sclerotinia sclerotiorum, the fungus that causes the disease, occurs around the world and has a very wide host range. Examples of its other Prairie hosts include mustard, sunflower, pulses, potatoes and flax, as well as such broadleaf weeds as stinkweed, Canada thistle, sow thistle and dandelion.

Annual surveys track the prevalence and incidence of sclerotinia and other diseases in the major canola-growing regions of the Prairies. “Prevalence is the percentage of fields where the disease is present,” says Clint Jurke, agronomy specialist with the Canola Council of Canada. “In 2012, in Manitoba sclerotinia was observed in 65 percent of the fields surveyed, in Saskatchewan it was 91 percent, and in Alberta 87 percent.”

Disease incidence, meanwhile, is the percentage of plants with the disease. In 2012 in Manitoba, nine percent of the plants had sclerotinia, in Saskatchewan 19 percent, and in Alberta 18 percent. “The rule of thumb is to divide the incidence number in half to determine the approximate yield loss,” notes Jurke. “So in Saskatchewan and Alberta the yield loss across the province due to sclerotinia was roughly nine to 10 percent, and in Manitoba it was about four to five percent.”

Looking at the survey data for the last 15 years, the 2012 disease levels were higher than average in Alberta and Saskatchewan, and lower than average in Manitoba. According to Jurke, a key reason for that was the weather. Unlike a lot of the other canola diseases, which are strongly impacted by rotation, sclerotinia is influenced almost entirely by environmental conditions.

Manitoba typically has moister conditions, so, Jurke says, it usually has more sclerotinia than the other two provinces. “In some years the incidence of sclerotinia has been over 30 percent in Manitoba. But in the last two years, the disease levels in Manitoba have been relatively low due to dry conditions.”

Sean Miller, plant disease specialist with Saskatchewan Agriculture and Food, says that when you look at Saskatchewan’s canola disease survey results over the last number of years, it’s clear that sclerotinia is and will generally continue to be an issue in moist years. “The disease doesn’t always create a significant impact in drier years,” he notes. “For example, during growing seasons such as 1999, 2000, 2004, 2010 and 2012, there was prolonged moisture at the bloom stage, and we found sclerotinia in the majority of the fields surveyed and a higher disease incidence. The results also show that the level of the disease can vary greatly from year to year and from region to region, depending on the weather.”

Moisture is important to sclerotinia levels on the Prairies because moist conditions are key to most stages of Sclerotinia sclerotiorum’s life cycle. The fungus overwinters in the soil as resting bodies called sclerotia, which can survive for several years. In the spring, if soil moisture is near field capacity for several days and temperatures are mild, the sclerotia will produce apothecia, little mushroom-like bodies that are shaped like golf tees.

The apothecia release millions of tiny spores, called ascospores, into the air. Spore dispersal is enhanced by windy weather without too much rain; continued heavy rain inhibits spore release and washes spores out of the air.

The spores usually land within a few hundred metres, but they can be carried into neighbouring fields by the wind. Spores that land on canola petals use the petals as a food source, so they can get enough energy to continue developing. When the infected petals drop off and fall into the crop canopy, they tend to get caught in places like the leaf axils where moisture also collects. From there, the fungus is able to infect the plant’s leaves and stems. Moderate temperatures and moist conditions favour the pathogen’s development at this stage too. For instance, the petals stick better to leaves and stems when the canopy is damp from showers, high humidity or heavy dew. In contrast, heavy rains can wash the petals off the canopy, while hot, dry conditions discourage growth of the fungus.

Initially the fungus causes white to grey lesions (damaged areas) on the leaves and stems. Eventually the lesions become bleached-looking and shatter easily. Affected plants ripen prematurely and lodge. The sclerotia form in the plant’s infected parts, and then fall to the ground or are harvested with the seed.

Overall, conditions that favour sclerotinia stem rot in a canola field include significant sclerotinia incidence in the field or nearby fields in the previous few years, moist conditions leading up to early bloom, frequent showers and moderate temperatures during and after flowering, and a dense crop canopy that holds in the moisture.

Deciding whether or not to spray

According to Jurke, foliar fungicides are the best way to control the disease at present. Because of the variability in sclerotinia levels, he recommends growers make decisions about whether or not to spray a fungicide on a field-by-field basis each year.

Growers have to make their spraying decisions before they see symptoms of the disease in their crop because by the time the symptoms appear, it’s too late to control the disease.

“The timing for a fungicide application is very critical,” says Miller. “Growers should scout for conditions conducive to sclerotinia before early flowering. Then they need to make sure their application timing follows the product’s label and that they apply the fungicide between the 20 and 50 percent bloom stage. The optimum timing is 30 percent bloom.”

Some fungicides are registered for a split application in canola, which provides longer protection during periods of extended bloom or under cool, wet conditions.

The Canola Council of Canada provides a Sclerotinia Stem Rot Checklist on its website to help growers make decisions on spraying. Growers complete the checklist for each of their canola fields shortly after first flower. If a field’s risk points add up to a high risk level, then the crop will likely benefit from a fungicide application; however, growers need to use current canola prices, fungicide costs and their own field’s potential yield to determine whether spraying makes economic sense.

Of all the factors in the checklist, Jurke thinks the moisture-related conditions are the most important. “The best way to determine whether to apply a fungicide is to look at how much moisture you’ve had throughout the period prior to flowering, and to look at the forecast for the upcoming two weeks – the greater the likelihood of variable weather, of showers, the greater the risk of the disease.”

Expected crop yield is also a big factor. “This disease likes the same thing that a farmer likes: high-yield canola. If growers are chasing yields better than 40 bushels per acre, we recommend they pencil in the use of a fungicide as a matter of course and book that fungicide,” says Jurke. “A 40-bushel crop has a fairly dense canopy, which can hold a lot of moisture and humidity, so it provides prime conditions for development of the disease. If they don’t end up needing the fungicide, for instance if the weather turns dry prior to the flowering period, then they can cancel their order.”

The checklist also includes a couple of factors that Jurke feels are less important, such as the frequency of canola in the field’s rotation. “A farmer’s rotation has a bit of influence, but his neighbour’s rotations have just as much influence because the spores are mobile. Also, pretty much all broadleaf crops and weeds are hosts of this disease, so there is always an abundance of the spores in the environment.”

If growers are not going to take the time to go through the whole checklist, Jurke suggests simply going into the crop and evaluating it prior to flowering. “Look at its estimated yield potential and do the ‘wet pants test’ – if their pants are routinely getting wet from walking through the crop around midday, then there is a pretty significant risk that sclerotinia is going to develop.”

In addition to fungicide applications, there are some cultural control options that can help manage sclerotinia stem rot. “One measure is to ensure a good, uniform plant stand, with a crop that is flowering at the same time and maturing in a uniform fashion. The longer that a crop flowers, the more exposure it has to the disease,” says Jurke. “Another measure is to choose the right variety. For instance, varieties that don’t lodge usually have less sclerotinia. The more lodging there is, the denser and wetter the canopy is, so the disease goes rampant.”

Hybrids with some resistance or tolerance to sclerotinia are also an option. DuPont Pioneer has offered these types of hybrids for several years, and Bayer CropScience is planning to have one on the market by 2014. But Jurke cautions that even with these varieties, “you still need to spray when there is a high risk of the disease.”

He’s looking forward to further improvements in sclerotinia resistance in canola in the future. “Long term, I’m a true believer that developing good resistance in our canola varieties is the best way to go. Private and public researchers are working on that. For example, results from research led by Dr. Lone Buchwaldt at Agriculture and Agri-Food Canada in Saskatoon are really encouraging. They’ve got some very strong types of resistance. If that can get into commercial varieties, then we’ll finally get ahead of the disease.” 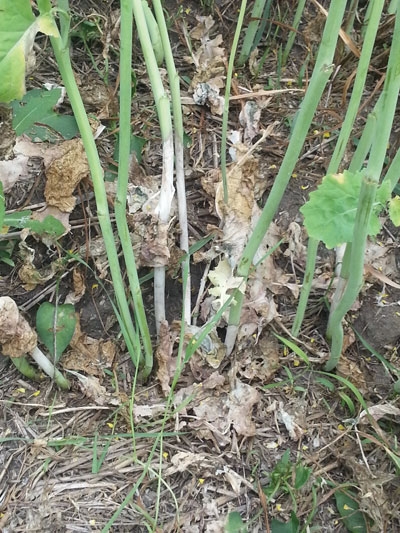 Sclerotinia symptoms in canola stems. The development of sclerotinia stem rot in a canola crop is like a complicated dance between the fungus’s life cycle and the crop’s growth stages.
Print this page