A canola disease previously undetected in Canada made its first appearance in one field in Manitoba last fall. Federal and provincial governments and industry are working together to isolate the verticillium wilt disease and assess the potential risk to industry.

The Canadian Food Inspection Agency (CFIA) confirmed the presence of the pathogen Verticillium longisporum for the first time in November 2014 in one field in Manitoba. Samples from the field had been originally submitted to the Manitoba Agriculture Food and Rural Development (MAFRD) Crop Diagnostic Centre after patches of wilted canola were observed, and then sent to CFIA for confirmation. A CFIA pest risk assessment has indicated Verticillium longisporum poses a high risk to canola production.

In 2013, the canola industry contributed $19.3 billion to the Canadian economy.

“The initial findings are in one field in Canada, so there is no need for growers to be too concerned yet until we have more information,” Clint Jurke, agronomy director with the Canola Council of Canada (CCC), says. “However, it is important to keep updated on the situation and to learn as much about this disease as you can.”

Verticillium wilt is a disease of concern in canola in Sweden and other northern European countries, and in Russia and Japan. In countries like Sweden, verticillium wilt can cause significant disease loss in canola crops. It has also been found in vegetable growing areas in the U.S. States of California and Illinois. What the potential impact for Canada will be is unknown.

“This pathogen, Verticillium longisporum, is a fungus that is particularly virulent on Brassica napus canola and it does infect a few other Brassica crops like mustard, rutabaga, cabbage, cauliflower and broccoli,” Jurke explains. “This [is] not the same pathogen that causes Fusarium wilt in canola (Fusarium oxysporum), nor is it the same species that causes verticillium wilt (V. dahlia) in sunflower and potatoes, which is common throughout Manitoba.”

The CFIA is taking the lead on addressing the initial findings. Its plant protection program aims to prevent the introduction and spread within Canada of plant pests of quarantine significance, and to detect and control or eradicate these plant pests in Canada. When a new plant pest is detected that may be regulated as a quarantine pest, the CFIA conducts surveillance activities to determine the source and distribution of the pest, and implements appropriate restrictions to prevent the pest from spreading, as necessary.

According to the CFIA, their next steps are to conduct additional surveys during the 2015 crop year in order to determine the distribution of the pest, and to confirm whether this is an isolated incident or may be more widespread. Survey activities are currently limited due to winter weather. The CFIA is developing its 2015 survey plan, which will involve surveying areas adjacent to the infected field as well as other canola production areas of Canada.

Next steps, including the regulatory status of Verticillium longisporum, will be determined based on the results of the surveys. As new information is available, it will be posted on CFIA’s website.

Verticillium wilt - What to look for?
Verticillium longisporum is a plant pathogen that can cause early death and reduced yield in crops. Symptoms include chlorosis of lateral branches or leaves (often one-sided) and early death stunting. At later stages, the outer stem may peel back to reveal black microsclerotia.

The pathogen is primarily spread through the movement of infested soil or diseased plant parts. There is also some evidence that seed from heavily infected crops may introduce the pathogen to new areas.

“This disease is like Fusarium wilt in some ways, but also like clubroot in other ways,” Jurke says. “Like Fusarium wilt, it is a soil-borne disease that infects the roots and goes into the vascular tissue of the roots. As the infection starts spreading from the roots up the stem through the xylem tissue, and if conditions are suitable for the disease and it infects the plant early enough, it will start plugging up the vascular tissues. Once the tissue is plugged, parts of the plant die, which is precisely what Fusarium wilt does.”

“V. longisporum spores may survive in the soil for 10 to 15 years, which is how it is similar to clubroot,” Jurke adds. “Both clubroot (caused by Plasmodiophora brassicae) and V. longisporum have long-lived, hardy survival structures that travel with the soil and increase the risk of spreading the disease into other locations. A lot of the management techniques for controlling verticillium wilt will be similar to what we recommend for clubroot, including sanitization, minimizing the amount of equipment, soil and plant residues moving over the fields, longer rotations and developing an on-farm biosecurity plan. In Sweden and other parts of Europe, growers are recommended to use a four-year canola rotation to help reduce the amount of disease. However, we don’t know for sure yet what will work in Canada.”

The best time to scout for verticillium wilt in canola is at swathing, but it is even possible to identify this disease after harvest, as microsclerotia will continue to develop. Infected plants will become more obvious after harvest as they will turn grey-black as they senesce. Fungicides are not effective against this disease and host resistance in canola is not available at this time.

“For now, industry and growers will have to wait to learn more from the CFIA survey results and next steps, and watch for further information and updates,” he says. “The Canola Council of Canada will be updating the Canola Encyclopedia and posting information on the disease lifecycle and identification to its website. The CFIA, Canola Council of Canada and MAFRD will continue to update and post information and management practices for growers over the next several months. Although we are hopeful this is an isolated case, it is important for everyone to learn more about the disease and how to reduce the risks.” 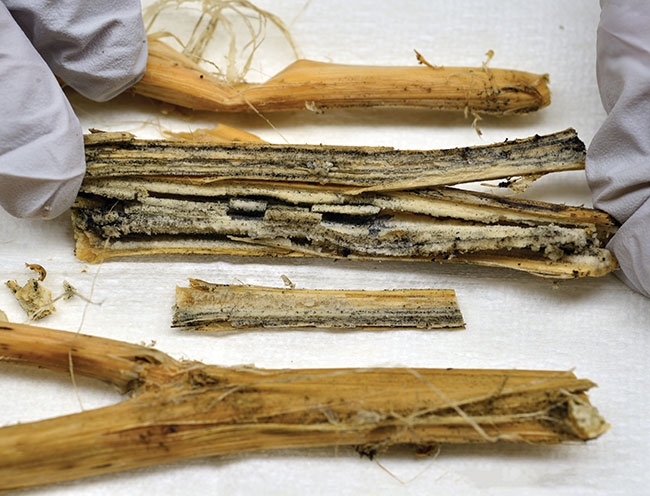 V. longisporum causes early death and reduced yield in crops. A canola disease previously undetected in Canada made its first appearance in one field in Manitoba last fall.