In 2014, a new to Canada plant disease, Verticillium longisporum, was first detected in an isolated canola field in Manitoba. Since then, the Canadian Food Inspection Agency (CFIA), in partnership with industry and provincial partners, conducted random field surveys to determine the pathogen’s general distribution in canola-growing regions of Canada. CFIA released the survey results by province in March.

The survey confirmed the presence of V. longisporum in six provinces in Canada: British Columbia, Alberta, Saskatchewan, Manitoba, Ontario and Quebec. “The national survey assessed 1000 fields across the main canola-growing regions in Canada, including approximately 300 fields in each of Manitoba, Saskatchewan and Alberta, as well as fields in British Columbia, Ontario and Quebec,” says Clint Jurke, agronomy director with the Canola Council of Canada. “This provided a good representative sample across the canola growing regions, with the presence of the pathogen V. longisporum detected in varying levels in all six provinces. However, we are cautiously optimistic that this pathogen is not going to cause significant disease levels or yield loss in canola in Canada.”

V. longisporum is a plant disease that impacts a range of crops, including canola and other crucifer crops such as cauliflower, broccoli, Brussels sprouts, turnip and radish. The pest is prevalent in Europe, Russia, China and Japan, and in some parts of the United States. Verticillium is not currently a regulated pest in Canada and is not known to be regulated in other countries where it is found around the world. CFIA continues to work with stakeholders to review the final regulatory status to be assigned to this pathogen, with a decision expected in mid-summer 2016.

In Europe, researchers have referred to it as the invisible disease because the symptoms are very difficult to diagnose. It took the diagnostic lab in Canada quite a long time to develop the proper method for detecting the stripe symptoms and to confirm the method with molecular tools.

“Now that we understand the distribution of the disease, some of the next steps are to conduct the science around this disease in Canada and we expect to see a number of research projects get underway in 2016,” Jurke adds. “We need to learn more about this pathogen under Canadian growing conditions, [such as] how long it survives in the soil, and determine strategies for reducing potential disease levels.”

European research suggests the disease can survive for 10 to 15 years in the soil. As well, some of the higher levels of the disease were found in Sweden in winter canola crops, which have a 250 day growing season compared to Canada’s spring canola crop with an approximate 100 day growing season over the summer. A better understanding of this disease under Canadian canola growing conditions will help industry better address the disease.

Management considerations
Growers are reminded to consider good sanitation practices in the field, starting in the planting season. Developing good biosecurity and sanitation practices can help mitigate the spread of this disease on- and off-farm. Biosecurity practices include equipment and tool sanitation, controlling off-farm traffic, monitoring seed/feed/fertilizer sources, and developing an on-farm biosecurity management plan to prevent plant pests from being introduced or spread on farms. The CFIA will continue to support grower associations and the provinces in developing voluntary biosecurity recommendations that farmers can implement to minimize the spread of this and other pests of canola.

Jurke explains that, similar to clubroot disease, Verticillium stripe is a soil-borne disease that moves with soil, equipment and traffic. However, unlike the resting spores of clubroot that tend to stay at soil level, the microsclerotia produced by the Verticillium pathogen develop in the stem tissue of the canola plant.

“As the microsclerotia develop in the canola stem, the streaking and striping symptoms begin to show up. At harvest as the combine cuts the stems and moves through the field, the spores can be distributed throughout the combine. So Verticillium stripe poses a bigger challenge than clubroot in terms of sanitation, particularly at harvest.”

For disease monitoring, now that more information on the distribution of V. longisporum exists, the disease will be added to the regular annual canola disease survey that is carried out by the provinces. “We now have the knowledge and technology to properly identify this pathogen. Growers and agronomists should monitor their fields, particularly at harvest, and if they see any disease symptoms, let provincial disease specialists or Canola Council contacts know,” Jurke says. “We are also planning to hold a training session at the end of the summer in Manitoba to help industry learn how to properly identify this disease.”

Overall this can be considered a good news story and shows that the system in Canada for monitoring and managing plant diseases is working. Once the disease was identified, a survey was conducted to establish the distribution of the pathogen and a process for properly identifying the disease and confirmation of molecular tools was completed in less than one year.

“The CFIA was very collaborative throughout the process, and early on formed a stakeholder advisory group with growers, researchers and industry to consult and inform on the process,” Jurke notes. “This stakeholder group continues to work with the CFIA to keep everyone updated and to better understand this disease, which so far doesn’t appear to be causing serious production or yield concerns.” 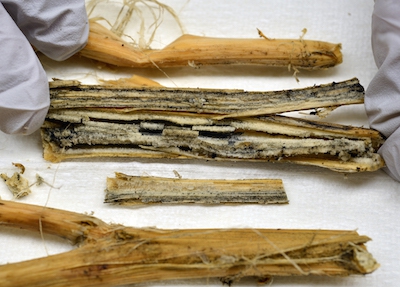