A disease severity assessment and yield loss model is under development. 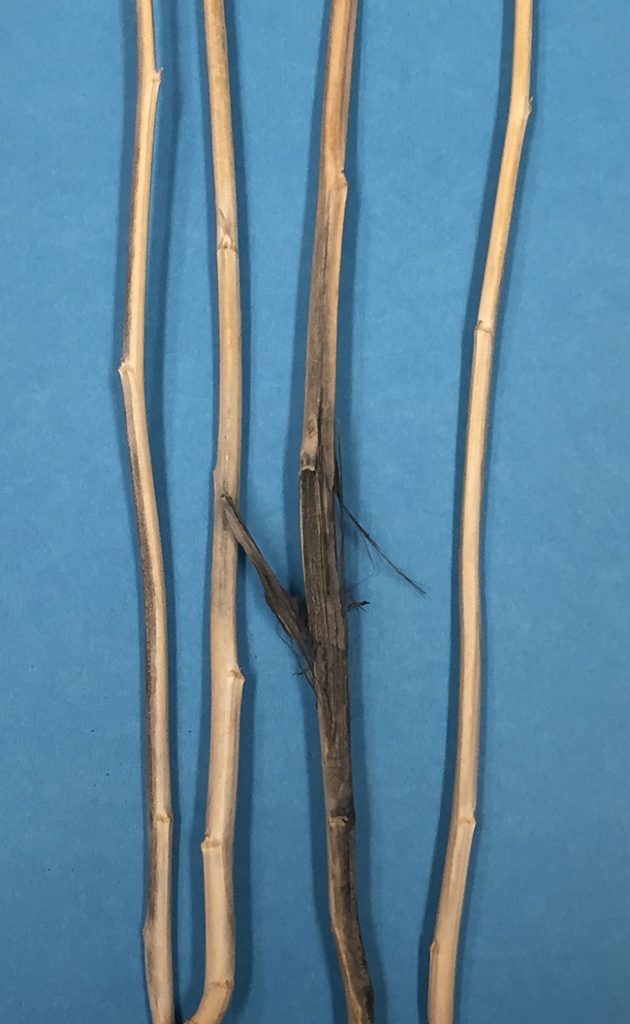 Verticillium stripe (VS), a soil-borne disease caused by the pathogen Verticillium longisporum, is a serious disease of canola in Europe. In Canada, VS was first identified in one canola field in Manitoba in 2014. A follow-up survey conducted by the Canadian Food Inspection Agency in 2015 found that the disease was detected in six provinces in Canada, with Manitoba and the Prairies having the most fields test positive to the disease, along with a few fields in B.C., Ontario and Quebec. Researchers at the University of Alberta are leading a project to determine the potential for yield losses and the effects of critical host-pathogen interactions.

“Most of our information about this disease comes from Europe, where it is a problem in both spring and winter B. napus, causing significant yield losses.” explains Sheau-Fang Hwang, professor of applied plant pathology at the University of Alberta. “Now that VS has been confirmed in canola in Canada, there is significant potential to negatively impact the canola industry, not only by causing yield loss but also by restricting market access. The disease seems to be more prevalent in Manitoba, and we need more information and better tools for assessing severity and risk of yield loss for canola growers.”

Hwang adds, “We don’t want this soilborne disease to become like clubroot, so in collaboration with Stephen Strelkov’s lab at the university, our team is proactively looking at practical applied plant pathology research that will help growers and industry in the field. Currently, there are no effective chemical controls available and also no information on the resistance to the pathogen in recommended cultivars. Therefore, we are trying to answer some of those questions, with funding from SaskCanola and Canola Council of Canada. In addition, other researchers in Manitoba and Saskatchewan are focusing on molecular studies and genetics of the disease.”

The focus of this four-year study is on developing protocols of inoculation and a yield loss model for VS, similar to the blackleg yield loss model Hwang and her team recently developed. The objective of the VS study is to provide a way to estimate yield loss based on disease severity found in the field. “We also want to evaluate commercial cultivars to determine if there are differences in cultivars that may be susceptible, tolerant or resistant to V. longisporum, and to be able to distinguish them from Verticillium wilt caused by a related pathogen V. dahlia,” Hwang says. “We also have two master’s student projects studying how this disease affects the plants by determining the effect of growth stage at the time of infection and of inoculation techniques on the severity of this infection. This will help to better understand the disease and to determine how field conditions affect disease severity. This information will also help plant breeders screen for potential resistance by determining the growth stages that are most vulnerable to infection, different inoculation techniques and spore concentrations that are required for effective screening.”

The first trials were initiated in the greenhouse and in outdoor microplots in 2019 to assess the effects of inoculum density on disease severity. Canola cultivars inoculated with various densities of a virulent isolate of Verticillium were assessed for VS symptoms, rated for disease severity and yield losses were measured. This information will be used to help develop the model to estimate yield loss resulting per unit increase of disease severity. The canola cultivars are also being evaluated for levels of resistance to VS.

“We were able to start our field trials near Edmonton in 2020, along with continuing the greenhouse trials despite COVID-19 impacts,” Hwang adds. “However, it was a very unusual year in parts of Alberta, with very wet conditions in May, June and July around Edmonton. Some fields were flooded, and the amount of rain in May and June was almost equal to normal precipitation for a whole growing season. At the end of August 2020, the field trials were still green, but we hopefully will be able to complete harvest this fall and collect results. The field and greenhouse trials will continue for another two years.”

The VS disease occurs during the growing season, with symptoms of leaf chlorosis and leaf loss. Closer to harvest, infected plants will show early ripening and plants can be stunted, symptoms that can be confused with other diseases like blackleg, Sclerotinia, grey stem or root rots. “Just before harvest, the lower stem will be white or grey in color, the stem tissue starts shredding and peeling, and small black needle pin points or microsclerotia will begin to appear,” Hwang explains. “The symptoms can easily be confused with blackleg, but the VS small black dots or microsclerotia are significantly smaller than blackleg pycnidia and tend to lump together. We calculate that the tiny black microsclerotia of VS are four or five times smaller than the small black pycnidia of blackleg. Both blackleg and VS have been found on the same plants, so it takes expertise to be able to distinguish between the two diseases.”

At the swathing and harvest stage, the microsclerotia can remain in the stubble and also fall to the soil, where they can survive for many years. The microsclerotia can move on harvesting and planting equipment from field to field, through wind or water dispersal and seed contamination. Similar to other soil-borne diseases like clubroot, it is important to use good stewardship practices to reduce the inoculum load, including limiting the spread from field to field and off-farm and extending rotations to a minimum of two years between canola crops.

“Once we have completed our research project, we expect to have protocols and a yield loss model in place that will help growers assess disease severity of VS and be able to estimate yield loss,” Hwang says. “We will know more about how the disease behaves under conditions on the northern Prairies, and what growth stages and inoculation strategies make canola plants more susceptible to infection. Hopefully we will have found differences in cultivars in terms of potential resistance to the disease. These tools will be useful to growers and industry, as well as plant breeders looking to improve resistance in new cultivars being developed. We would also be happy to receive canola plant specimens from growers who see VS symptoms in their fields to help in our understanding of this disease. Once the assessment tools and yield loss models are complete, we look forward to sharing the results.”