Is vertical tillage a good choice for managing your corn residues? A Manitoba project is generating new information that will help growers decide which corn residue management technologies and practices would be best for their own farm.

Yvonne Lawley, a professor of agronomy and cropping systems at the University of Manitoba, is leading the project. She initiated this research in part because many growers have been asking about vertical tillage but very little research information is available on the technology under Prairie conditions.

Another factor driving her interest in the project is the potential for expanding the corn acres in Manitoba. “A lot of the seed companies are actively working on early season corn,” she says. “I think residue management is one of the biggest challenges potentially hindering new adopters of corn. So it seemed very timely to have a project focused on the new tools available to manage corn residue in Manitoba.”

Lawley describes some of the difficulties that Prairie growers can face in managing corn residues. “In a short-season area, farmers are concerned about colder [spring] soil temperatures and wetter soils when they have lots of residue covering the soil surface. Those concerns may not be unique to corn residue, but may be aggravated by the amount of residue that you get from corn.

“Corn residue has a very high carbon to nitrogen ratio [so] it is very slow to decompose, and corn crops generate twice the amount of residue [compared to crops like soybean and wheat], especially with higher yielding corn varieties. Growers also have to deal with the shape and nature of the root balls that come with corn stalks.”

She adds, “In Manitoba, corn is often harvested at a time of year when there could be snow in the fields. Then after harvest, there’s the work of incorporating that residue, when your field may be frozen and it will likely be wet. So there are all kinds of challenges to doing residue management at that time of the year.”

According to Lawley, Manitoba growers commonly manage their corn residues using a double disc in the fall, with two or three passes to chop up and incorporate the residues. “That is expensive in terms of time and fuel. Given the very late window for corn harvest in Manitoba, time is probably more limiting than the fuel,” she says.

“I think that everyone is looking for a residue management option where they can cover more land quickly, and that is the appeal of vertical tillage – you can drive the tillage equipment fast.”

The term vertical tillage can sometimes mean different things to different people. For the purposes of this project, Lawley defines a vertical tillage unit as: “tillage equipment that has cutting discs to create vertical cuts into the soil. Those discs can run perfectly vertical or they can be angled to create more disruptive tillage. Also, at the end of the unit, there’s a smoothing or finishing component, such as rolling baskets or heavier tines, that then smooths out the seedbed.”

The low-disturbance treatment leaves a lot of residue on the soil surface, so it offers soil conservation advantages. The high-disturbance treatment results in a black seedbed similar to that produced by a double disc. In Manitoba, high-disturbance vertical till is more common than low disturbance. Lawley says, “Very few Manitoba farmers are using vertical tillage in a soil conservation sense. Most people are using this equipment as a high-speed disc, as an alternative to a double disc, especially with corn residue.”

The strip tillage treatment involves tilling only the strips where the seed rows will be planted. Walther notes, “With strip tillage, usually less than 30 per cent of the field gets worked, so about two-thirds of the field is undisturbed like no-till.” Although strip till is not widely used in Manitoba, he says it is common just south of the border in Minnesota and North Dakota.

“The vertical tillage and double disc treatments are more similar to each other, while strip tillage is almost like an entirely different type of tillage system,” explains Lawley. “Many farmers think strip tillage is very slow. But I think strip tillage offers some interesting comparisons in terms of giving you the best of both worlds from a soil conservation standpoint. Much of the field is protected from erosion by the crop residue cover, but early in the season, the worked strip where you’ll be planting the seed will be blacker, fluffier, drier and warmer, and all those things we’re trying to do by working the entire field.”

Equipment evaluation
One component of the project involves evaluating the performance of the tillage equipment used in the project. For this component, Lawley and Walther collaborated with the Prairie Agricultural Machinery Institute (PAMI) in Portage la Prairie. They measured fuel consumption, horsepower requirements, draft force (the force required to pull the implement through the soil) and the time it takes to complete the tillage.

A key factor in the comparison is the number of tillage passes that growers typically use. “For strip tillage, we’re assuming the strips are created in one pass. For the vertical till, most farmers that we’ve talked to are using two or even three passes. With the double disc, they are usually using two passes,” Lawley notes.

Walther also took slow motion videos of the different pieces of equipment moving through a field. He and Lawley examined the videos to get a better understanding of how each tillage tool works.

“The project’s strip till unit tends to push the residue away from the strip and then work the soil. So it doesn’t actually incorporate a whole lot of residue,” he notes. Lawley adds, “The strip tillage is really the most intensive tillage; it is just concentrated in a very small band.”

The different tillage implements run at different soil depths. “Usually, for the vertical till-low disturbance treatment, we set the equipment to about 2.75 inches, or seven centimetres, deep. The vertical till-high disturbance unit would be about the same or a little shallower, maybe two to 2.5 inches [five or six centimetres], depending a bit on the farmer’s preferences,” says Walther. “The disc treatment is about four inches (10 centimetres) deep. For the strip till, it’s just one shank that goes into the soil, and it goes about seven to eight inches (or 20 centimetres) deep.”

Field trials, results so far
The project’s other component involves on-farm field trials in Manitoba to assess how the tillage treatments affect the following soybean crop. In 2014-15, there were two sites, one at Winkler and the other at MacGregor. In 2015-16, one site is again at MacGregor, and one is at Haywood.

The plots are field-length strips. The tillage treatments are carried out in the fall, if possible, or in the spring. Depending on the farmer’s preferences, the soybean plots may be land rolled. “Farmers in Manitoba are doing land rolling when they plant soybeans, usually just after planting, to aid in harvesting where they might have uneven ground or stones that could get caught in the combine at harvest,” Lawley says.

Walther is collecting data on soybean emergence, timing of flowering, plant height, pod height and crop yield. He is also monitoring soil temperature and soil moisture at five and 30 centimetres deep in the soybean plots throughout the growing season. As well, he will be calculating the economic costs and benefits of the different treatments.

Walther has already analyzed much of the data collected in the soybean plots in 2015. The results showed that factors like crop yield and emergence varied little between the different tillage treatments.

The average soil temperatures were very similar for all the tillage treatments. However, the temperature range from day to night varied with the treatment; the strip till plots had the warmest daytime temperatures and the coldest night temperatures. But after the land rolling operation, that diurnal fluctuation was reduced.

“We think that one of the reasons why strip till is able to warm the soil faster is due to the shape of the soil surface. A berm is created in that strip, and we think the rapid warming is driven by the ability of that berm to catch solar radiation. Then when we roll the strip, we flatten out that berm so less warming occurs,” Lawley says.

Lawley and Walther are hoping to further evaluate the effect of land rolling during the project, but that will depend on whether any of the co-operating farmers decide to do land rolling.

Walther is also collecting data for his economic analysis. He explains that an overall economic analysis will likely be challenging because there is not a lot of western Canadian data for vertical till units and strip till units regarding purchase costs, maintenance costs, depreciation and so on. Lawley adds, “People tell us that vertical till units are more expensive to maintain; the units just have a lot more bearings and moving parts.”

Better information for growers
Rather than trying to come up with one perfect system for managing corn residue, the project aims to provide data about equipment performance, crop growth, yield, soil temperature and soil moisture that will help growers make their own decisions about which tillage tool would be best for their own situation.

“Tillage is very farm-specific; it comes down to things like how people want to spread their work loads, what kind of seedbed they want to create, what kind of planting equipment they have, and what crops are in their rotation. I think this project will help farmers in Manitoba because it will give them some data by which they can weigh their options,” explains Lawley.

“Certainly the work we did with PAMI will help growers. I don’t think that type of data really exists [anywhere else] in Western Canada right now. The information about fuel consumption and travel time could help growers evaluate their own operations and different investments that they are thinking about making.”

Given that the soybean yields in 2015 were about the same no matter which tillage treatment was applied, Walther speculates that the project might also generate information that would support reducing the number of tillage passes used to manage corn residues, as long as farmers have seeding equipment that can handle planting into residue. Fewer tillage passes would reduce the time and money spent on tillage, while improving soil conservation. He points out that Manitoba has had some serious incidents with blowing soil in recent years, especially in years with dry springs.

This project is being funded by the Manitoba Corn Growers Association, Western Grains Research Foundation, and under Growing Forward 2, through Manitoba’s Agri-Food Research and Development Initiative. Lawley and Walther also thank the collaborating farmers: the Toews family at MacGregor and Haywood, Randy Froese in Winkler, and Brent Wiebe in MacGregor.

Lawley and Walther are looking for more farmers to take part in the final year of the field trials, which starts in fall 2016. If you’re interested in participating, contact Walther (waltherp@myumanitoba.ca; 204-891-1649; or @Pat_Wath) for more information. 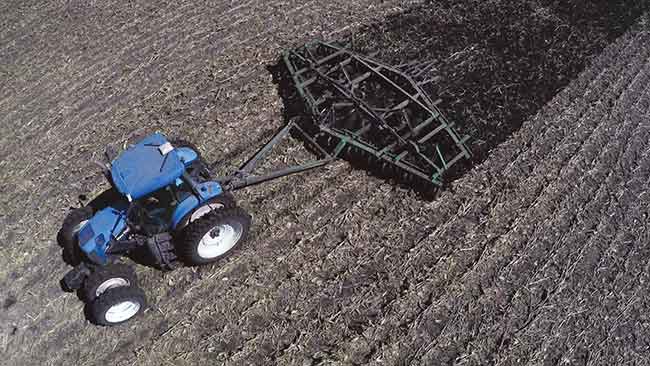 Manitoba growers usually use a double disc to manage corn residues. Is vertical tillage a good choice for managing your corn residues?