Variable rate (VR) technology has been around long enough that VR fertilizer application is common. But what about VR seeding rates? Like VR fertilizer, VR seeding seeks to smooth out field variability so crop establishment is more uniform. 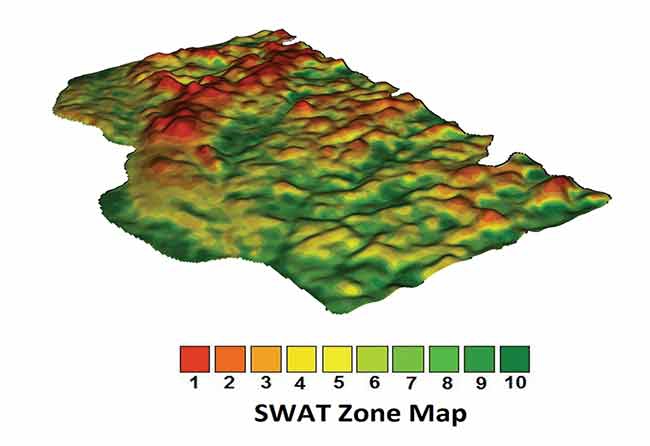 Variable rate (VR) technology has been around long enough that VR fertilizer application is common. But what about VR seeding rates? Like VR fertilizer

“Variable rate seeding uses the same concepts as variable rate fertilizer. Our land varies so we are trying to get a more even crop that produces more,” says Jeff Prosko of Rose Valley, Sask. “It’s just logical. We do it with fertilizer so why not with seeding rates?”

“To make variable rate work, you need to start with the right zones and understand how crops respond to inputs in each zone,” Willness says.

A SWAT map of a field in the Rose Valley area of Saskatchewan typically has 10 zones. Zones 1 and 2 are eroded knolls, hills, sands and low organic, dry areas of the field. Zones 3 and 4 are upper shoulder slopes where water runs off. Zones 5 and 6 are midslope, flatter areas. Zones 7 and 8 are at the bottom of the slopes, and Zones 9 and 10 are depressions that may include salinity, heavy clay, and high organic matter and may be wet.

In wet years, the green zones tend to flood and even in drier years, salinity will be an issue. The red zones are well drained, resulting in productive wet years, but poor productivity in dry years as their water holding capacity is a limitation. Year in and year out, the yellow zones provide the best opportunity to grow big crops.

Making VR seeding rates work
The basic philosophy behind CropPro’s VR seeding prescriptions is to try to get uniform stand establishment across the entire field at a targeted plant population. The general approach is to seed higher in the depressions (Zones 7 to 10) because stand establishment is typically more difficult in these low areas due to cold, wet and sometimes saline soils. Higher seeding rates are also targeted on the knolls that can be drier at seeding.

“We thought this was the right approach but we wanted to verify it in the field, so we conducted plant stand studies in 2012 and 2013,” says Willness.

In canola, CropPro likes to target seven plants per square foot, and uses thousand kernel weight calculations to determine seeding rate. During 2012, the trend they saw in canola was an average seeding rate used by farmers of 4.4 pounds per acre and an average stand establishment of 5.4 plants per square foot. This was about 77 per cent of target stand establishment.

“These are generalized numbers. A field at Naicam might be different than a field at Melfort or Regina,” Willness says.

Charting out the benefits
At Rose Valley, Prosko says his experience with VR seed has been positive. He has been pushing seed and fertilizer rates over the last 10 years, in the pursuit of higher yield.

“Last year we straight cut all of our canola. The crops are just more uniform so harvest timing is easier,” Prosko says.

Prosko also grows a significant acreage of oat, and a competitive and uniform crop is important to help compete with wild oats. The uniformity achieved with VR seed also helps reduce lodging and improves harvest timing. He targets a minimum of 25 plants per square foot in oat.

“With oat we like to keep the plant populations as high as possible so it is competitive with wild oat,” says Prosko.

A uniform plant stand can also help with fungicide timing, especially targeted at Fusarium head blight in wheat. The window for application is narrow, around early flowering. If the crop does not come into early flowering uniformly, then the risk of Fusarium developing on part of the crop increases. Lower plant stands in wheat can also mean more tillering, which causes uneven crop development leading to difficult fungicide timing.

Willness cautions that VR seed doesn’t always translate into the types of benefits that Prosko has seen, because so much is dependent on the weather after stand establishment. However, he says it does help produce a more uniform plant stand to help set up the foundation for a good crop. While Mother Nature ultimately has a large influence on stand establishment and the end benefits of a uniform plant stand, VR seed has the potential to improve crop returns.