In the February 2014 issue of  Top Crop Manager, the various processes to determine soil management zones were discussed. The purpose of identifying soil management zones is to compare the similarities and differences in soil and topography so that each “unique zone” can receive the right fertilizer, at the right rates, with the right placement and the right time (4 R’s), based on specific soil conditions.

After each zone is soil sampled, soil test results for each management zone must be carefully reviewed. Make sure the soil test report makes sense. Are soil test levels for plant-available nitrate nitrogen (NO3-N), phosphorus (P), potassium (K) and sulphate-sulphur (SO4-S) clearly shown? Are the soil test methods shown? (For example the Modified Kelowna method for soil test P is the standard in Alberta and the Olson method is the standard in Saskatchewan and Manitoba; all soil test correlation field research has been done with these methods in each province.) Are the soil sample depths clearly shown? Are the analytical results clearly shown in pounds per acre or parts per million (ppm)?  Make sure you clearly understand the reports so results can be interpreted correctly. Most labs will provide general fertilizer recommendations; so a good place to start is to review their suggested fertilizer recommendations but the final fertilizer decisions fall to you; that’s your job in conjunction with your agronomic advisor.

Review soil organic matter (OM) level, soil pH and electrical conductivity (EC) for each zone. Do the results make sense? For example, is soil OM higher in lower slope positions, and lower in upper slopes and eroded knolls? Review soil test N, P, K and S results. Which nutrients are adequate, marginal or deficient in each zone? Often P, K and S will be lower in upper slope positions as well as soil OM level. Soil pH is often higher in upper slope positions. Some labs will provide a bar graph to indicate if the level of each nutrient is adequate or deficient. But it is also a good idea to review the information from your provincial department of agriculture website to determine when P, K, S or micronutrient levels are adequate, marginal or low. For example, Alberta farmers should review the following Alberta Agriculture publications:

Using publications such as these can be very useful to decide which nutrients are deficient or adequate. In the Alberta publications, fertilizer recommendation tables are provided to assist in deciding what rate of fertilizer should be added when soil test levels are deficient or marginal. Information is also provided on fertilizer placement and timing of application. It is important to note these recommendations are science-based from research conducted by university, federal and provincial scientists over a number of years, and is your best source of unbiased, reliable information.

Determining N fertilizer rates is not an exact science and is a challenge. Nitrogen fertilizer response is function of a number of factors:

Lower topographic slope positions often have high soil organic matter with greater nutrient mineralization potential. These soils tend to be more fertile, and during the growing season lower slope position soils will often have higher amounts of plant available nutrients. Therefore, depending on soil test levels, it may be reasonable to slightly reduce fertilizer rates on lower slope soils.

Upper slope position soils will usually have lower soil organic with lower mineralization potential, particularly if erosion has occurred in the past. These soils tend to be less fertile. During the growing season, upper slope position soils will often have lower levels of plant available nutrients and, therefore, tend to produce lower yielding crops. However, depending on soil test levels, it may be reasonable to increase fertilizer rates on upper slope soils to improve soil fertility and crop yield potential. Using this plan in the longer term can lead to increased soil fertility, increased soil organic matter and improved crop yield potential.

Alberta Agriculture and Rural Development (ARD) has been conducting a Variable Rate Fertilizer Research Study to evaluate crop response to a number of different rates and types of fertilizers on soils with different slope positions. Research is being conducted in the Dark Brown, Thin Black and Black soil zones. This study has shown very good N fertilizer response at all slope positions. Often crop response to P and S fertilizer is greater on mid and upper slope positions due to lower soil test levels. Lower crop yield response to P fertilizer occurred on lower slope soils due to higher levels of plant available P. Further, results have clearly shown that as soil salinity (shown as EC or electrical conductivity on a soil test report) levels in soil increase, fertilizer rates should be reduced accordingly.

To assist with developing N fertilizer recommendations, a program called Alberta Farm Fertilizer Information Recommendation Manager (AFFIRM) is very useful. It can be downloaded at no cost from the ARD website. Information that is entered into the program includes the soil zone of the farm, crop to be grown, soil test results, estimated cost of each fertilizer, expected crop value at harvest and expected moisture conditions. The program will use the most recent crop yield response information, will provide expected yield response to N fertilizer at three different moisture levels and will provide the economics of increased N fertilizer rates. This is a useful program to help plan optimum fertilizer rates.

Hopefully, as field research continues into variable rate fertilizer application, a greater understanding of when and how to best manage fields will continue to emerge. 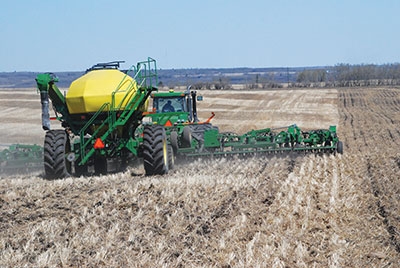