Farmers can’t yet predict the weather – but with help from the research community, more effective decision-making tools are in reach. 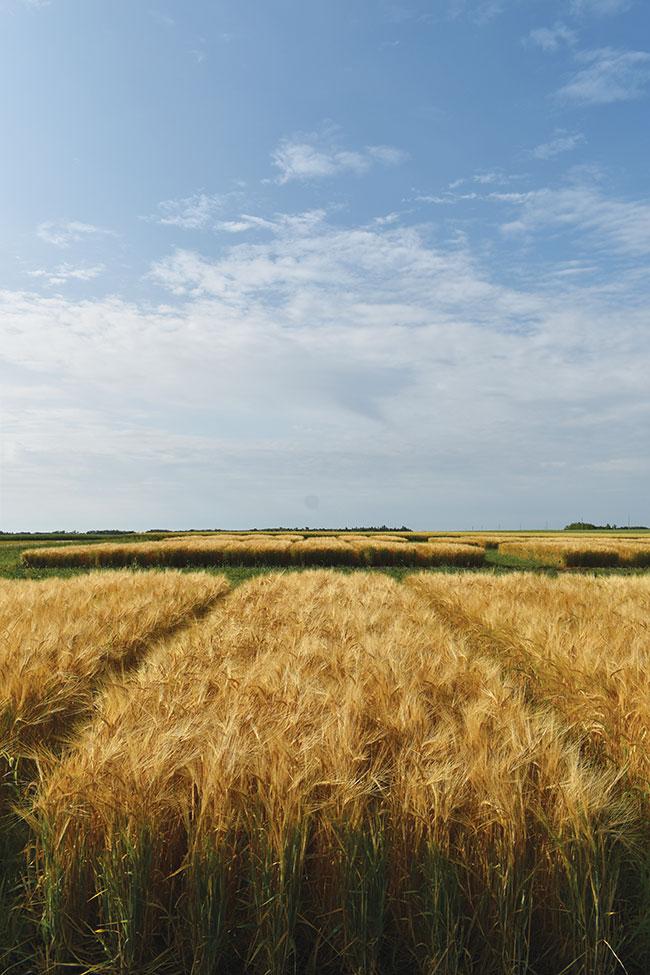 To mitigate economic risk, some producers spray as a precautionary measure regardless of actual risk levels. Photo courtesy of Ramona Mohr, AAFC.

Both projects aim to offer producers valuable tools for decision-making based on the best available science.

Fusarium risk
Fusarium is a major concern to western Canadian producers. Infection represents multiple risks to producers, including reduced yield, reduced quality via Fusarium damaged kernels (FDK) and mycotoxin (DON) contamination. Ojo says fields with high percentages of FDK – 2.2 per cent or higher – can cause losses of about $89 per acre when grade 1 is downgraded to feed.

To mitigate economic risk, some producers spray as a precautionary measure regardless of actual risk levels. The goal of the project, therefore, is to develop a tool that can predict the likelihood of disease incidence based on weather conditions prior to anthesis, so farmers can be assured of the economic value of refraining from spraying during low-risk periods – and be prepared to spray at times when conditions are favourable for disease incidence.

Risk factors for FHB are well-known, but the new project promises several gains on past research efforts. The project will focus on barley and durum as well as spring and winter wheat, Ojo says. “FHB may affect the other cereals differently than the way it affects spring wheat.”

The model used to predict FHB risk hasn’t been validated in more than 15 years in Manitoba, he adds. “We know that the pathogen doesn’t stay the same – it adapts over time. So we want to check whether the thresholds for temperature and humidity are still correct or whether we need new thresholds.”

“Because of the issue around the border, we decided to engage our colleagues in Saskatchewan and Alberta to see if we can develop a Prairie-wide model,” Ojo says.

The project utilizes plot data from 15 locations in all three Prairie provinces each year between 2019 and 2021 as well as field data collected from more than 200 farmers’ fields. The end goal is to release an interactive web tool that predicts FHB and DON risk by 2023. Individual producers should be able to customize the tool based on seeding date, location and resistance level, Ojo says.

“Manitoba can have extremely variable moisture conditions, ranging from drought to flooding, sometimes in the same crop year. These moisture extremes can affect how efficiently fertilizer N is used by the crop,” Mohr explains.

The project’s goal is to create a tool that takes into account soil moisture conditions based on soil type, specifically the risk of extreme moisture during critical periods of the growing season, based on historical weather trends, to help create a set of guidelines for N management.

Ojo says his team has 72 years worth of data on rainfall during the growing season dating back to the 1950s. Based on the data, he can look at a particular week and assess the probability that a given region will receive rainfall during that week. The tool also takes current soil moisture levels – gleaned from weather stations – into account, as well as soil types of different regions.

“We aim to provide Manitoba producers with a quantitative measure of the relative risk of moisture extremes in their region during critical parts of the growing season, which may help to inform a range of management decisions. This type of information is not currently available for Manitoba producers,” Mohr says.

“With respect to N management, we also aim to provide producers with information to help assess and manage the relative risks versus benefits of different N management decisions by taking into account both the current moisture conditions on their farm, and also the probability of extreme moisture conditions going forward based on historical weather data.”