Don’t rush to make a decision. 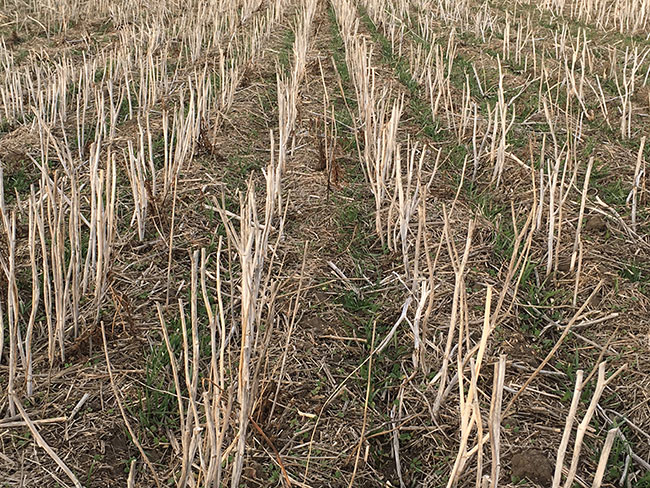 Don’t rush to make a judgment on winter survivability until spring seeding is well underway. Photos courtesy of Paul Thoroughgood.

Stay calm and carry on – with spring seeding. That’s the advice of seasoned winter wheat growers when it comes to assessing winter wheat survival in the spring.

“I encourage farmers to leave their winter wheat until they are about half-done seeding their spring cereals before making a final assessment on winter survival. I’ve seen inexperienced farmers wanting to spray out the winter wheat before it has even started to grow,” says Paul Thoroughgood, farmer and Ducks Unlimited agronomist in Moose Jaw, Sask. “You don’t want to make a rash decision.”

In Enchant, Alta., Greg Stamp of Stamp Seeds has winter cereals as a regular part of his rotation, including winter wheat, fall rye, hybrid fall rye and winter barley. He has had a few occasions where winterkill has been an issue. Winterkill is usually a result of snowmelt that freezes on top of seed rows. Most of the time, this type of winterkill is restricted to low spots and isn’t too much of a concern. However, one year a field with flat topography didn’t drain and the majority of the seed rows became iced over, so it had to be reseeded.

“We start looking at the fields right before seeding, but we don’t make any decisions until about halfway through seeding. Winter wheat comes back better than you would think,” Stamp says. “Put a flag in the field so you can go back to the same location each time you go out.”

Stamp says an especially important management tool for winter wheat is to use a fungicide/insecticide seed treatment in the fall to help with winter survival. Research by Agriculture and Agri-Food Canada scientist Brian Beres showed the value of the practice.

“We have had very good success with the dual seed treatment. There really is something to it,” Stamp says.

Thoroughgood says there are several ways to assess winter wheat survival beyond waiting for the seedlings to grow. The first is to use a bag test early in the spring. Dig up a few winter wheat plants, wash the soil from the roots, and place them in a zip-top bag with a wet paper towel. Leave the bag in a warm, sunny place for seven to 10 days and assess for new growth. Healthy plants will be developing white roots. Black roots may mean the plants are dead and you need to spend more time monitoring the field.

Another way to assess survival is to simply dig up some plants, leaving the soil root ball intact, and let it grow inside in a warm, sunny area. After a week to 10 days, wash the soil from the roots and look for healthy, white roots. 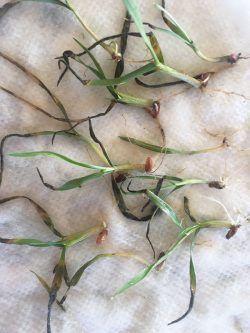 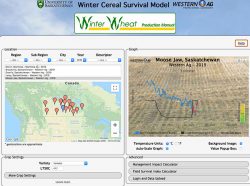 Web-based forecasting tool
Western Ag Professional Agronomy, in collaboration with the University of Saskatchewan, built a web-based “Winter Cereal Survival Model” to help growers track winterkill days. The model is based on winter cereal research by emeritus professor Brian Fowler at the University of Saskatchewan, and is freely available to farmers.

Currently, 15 weather stations generate data for the model with temperature probes placed one inch deep into the soil. Soil temperature is monitored throughout the fall, winter and spring. The cold tolerance of different winter cereal varieties is built into the computer, as measured by LT50 (lethal temperature at which 50 per cent of plants die). Farmers can select a location from the map nearest to their farm, select their variety and see if there have been any winterkill days at that location.

For example, in Moose Jaw during the 2019-20 winter season, Yorkstar, an old variety with poor winter hardiness that is no longer grown in Western Canada, would have had at least 12 winterkill days in late January and early February – showing the odds of winter survival to be poor. Conversely, at the same location with CDC Bueto, rated Very Good for winter survival, no winterkill days had occurred.

Thoroughgood says winter wheat survival is like a boxing match. Rarely does one deep freeze event deliver a knock-out blow to wheat. But as with the example of Yorkstar, many body blows can eventual knock out the plant.

“The model is a tool that farmers can use to help assess their winterkill risk. In a worst-case scenario, like on my farm this year, where I have winter wheat seeded into lentil stubble and no snow, you can go in and see if there have been winterkill events,” Thoroughgood says. “It can take some of the worry out of the cold weather events we have been having.”

Assessing plant stands
The optimum plant stand for winter wheat is over 20 plants per square foot (plants/sq. ft.), depending on where you farm. In Enchant, Stamp likes to see 40 plants/sq. ft. on irrigated land, and he gets concerned when densities fall below 20. On dryland, he likes about 30 plants/sq. ft.

Saskatchewan Crop Insurance will pay out an “establishment benefit” if plant stands are less than five plants/sq. ft. Farmers can choose to take the benefit if the plant stand is between five and seven plants/sq. ft.; above seven plants is considered “established” with no benefit payout. In comparison, the establishment benefit for hard red spring wheat kicks in if there are fewer than 7.8, farmer’s choice at 7.8 to 12.2, and established at more than 12.2 plants/sq. ft. 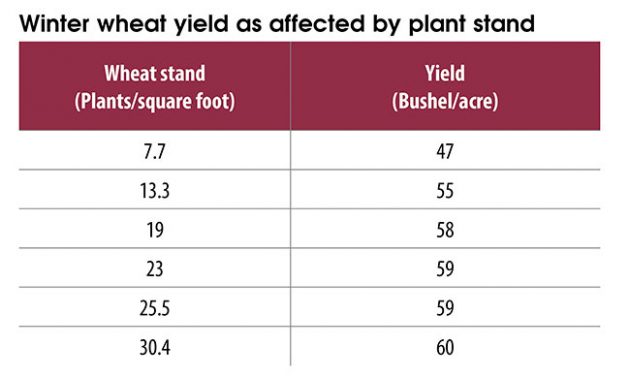 Thoroughgood says that overall, winter wheat survival in Western Canada is surprisingly just as good as the biggest winter wheat-growing state in the U.S., Kansas, at around 91 per cent survival.

“Often, the perceived risk of winterkill is much higher than reality,” Thoroughgood says. “Including winter wheat in prairie Canadian crop rotations provides many benefits that farmers should consider.”