Spot spraying of wild oats never really caught on, but how about applying precision farming techniques to wild oat control? On rolling landscapes, wild oat emergence and growth are typically greater in lower slope positions, so the potential to use landscape position to target wild oats and reduce overall herbicide application is there.

Hugh Beckie, a weed scientist with Agriculture and Agri-Food Canada (AAFC) at Saskatoon, Sask., conducted a four-year study from 2006 to 2010 in a hummocky field in the semiarid Moist Mixed Grassland ecoregion of Saskatchewan to assess the potential of wild oat, and to further evaluate its emergence, growth and management according to landscape position.

“Blanket applications of wild oat herbicides hasn’t reduced the relative abundance ranking of wild oat since the 1970s, so we wanted to evaluate wild oat emergence, growth and management according to landscape position to see if we could reduce herbicide use without compromising weed control or yield,” explains Beckie.

The four experiment sites were surveyed, and based on the resulting elevation contour map, each plot was divided into upper and lower slope positions. The simple landscape had down-slope variation in elevation (six to nine per cent), but little across-slope variation. Sites had an east, west, or south aspect.

Based on this and previous studies in the Northern Great Plains, Beckie explains, the probability of similar overall weed control between site-specific and full herbicide treatment is likely greatest under dry spring (i.e., April and May) growing conditions. However, crop scouting will be necessary to determine if upper slope landscapes require wild oat control, especially in wetter years. The benefit of using this approach, though, is that rather than trying to target specific patches throughout a field, landscape position can be used to delineate where to spray for wild oats. Conversely, in a wetter spring, scouting will likely show that a blanket application may be required.

“Because economic thresholds have not been widely adopted by growers in managing wild oat, site-specific treatment in years when conditions warrant may be an appropriate compromise between no application and blanket herbicide application,” says Beckie. 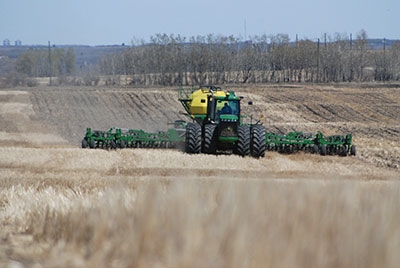