Jan. 27, 2014 - A first-of-its-kind inventory for wild and weedy relatives of important crops has been developed by U.S. Department of Agriculture (USDA) scientists and their collaborators.

According to Stephanie Greene, a plant geneticist with USDA's Agricultural Research Service (ARS), the inventory was created to aid the conservation of these so-called "crop wild relatives" (CWRs) and ensure their availability as prized sources of genetic diversity for an array of economically important traits, including improved drought tolerance and resistance to pests and diseases.

Greene and her colleagues prioritized the U.S. national inventory based on factors such as how closely related the wild species are to crops, especially those grown for food; their availability in gene banks or protected habitat areas; and the ease or difficulty of transferring desirable traits from the wild species to their cultivated "cousins."

All told, the inventory covers 4,596 taxa from 985 genera and 194 plant families that are either indigenous to the United States or have become naturalized—established of their own accord following human introduction. Among CWR of major crops, the genus Helianthus (sunflower) is the most abundant, numbering 73 total taxa, including H. annuus (domesticated as the sunflower). Other important CWRs include species closely related to strawberries, blackberries, raspberries, blueberries, grapes and stone fruits, such as cherries and plums.

There are many examples of native wild U.S. species that have played key roles in ensuring the continued health and productivity of crops grown worldwide, according to Greene, who works at the ARS Plant Germplasm Introduction and Testing Research Unit worksite in Prosser, Wash. The inventory itself lists 17 major crops that have benefited from traits associated with 55 native CWR.

A recent example is cultivated sunflowers worldwide, which have benefited from wild North American relatives in the form of resistance to rust, sclerotinia, downy mildew and other diseases and pests.

Read more about this research in the January 2014 issue of Agricultural Research magazine. 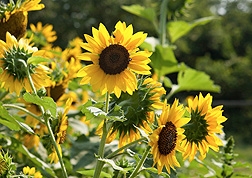