Recent upgrades to the quarantine facilities at the Morden Research Station of Agriculture and Agri-Food Canada (AAFC) are key to the fight against highly virulent diseases in Canadian crops. For instance, the facility is crucial for safely conducting research to develop wheat lines with resistance to the Ug99 race of wheat steam rust, in case this devastating disease arrives in Canada.

“The upgrades were essential to meet the new standards and protocols updated recently by the CFIA [Canadian Food Inspection Agency] for Plant Pest Containment Level 3, or PPC3. Our lab at the Morden Research Station was established in 1989 as the only PPC3 lab at that time, [when it was used for flax rust research,] and it met the standards of that time. Now it is the first PPC3 in Canada under the new guidelines and new regulations,” says Dr. Khalid Rashid, a plant pathologist with AAFC at Morden.

PPC3 is the highest quarantine level for plant pests. The Morden lab is certified for plant pathogen containment (requirements for containment of insect pests of plants are somewhat different). The lab is currently used for research on flax rust and Ug99.

“This state-of-the-art PPC3 facility will help the plant pathology scientists at AAFC’s Cereal Research Centre in Winnipeg and the Morden Research Station in conducting research under highly controlled quarantine conditions to develop solutions in genetic resistance to rust diseases, and it could be used for any other kind of quarantined pathogen that we might need to do research on,” says Rashid.

“The PPC3 facility is fully proofed against pathogen escape by air, water, materials and personnel going in and out,” he explains. For example, the air intake and exhaust system includes features such as high efficiency particulate air (HEPA) filters, which trap material down to a size of 0.3 microns, so no rust spores can escape.

“All water from different operations is collected in effluent tanks and pumped into a sterilizing vessel and pasteurized by steam at 120ºC for 40 minutes to kill any rust spores present in the effluent before being discharged into the sewer system.

“All materials and discards leaving the lab have to be sterilized through a double-door autoclave before exiting the facility.

“Entrance to the facility is restricted to scientists and support staff working with flax and wheat rust. Personnel have to shower before exiting the facility to make sure that they do not carry any rust spores on their bodies. Then they exit into a dressing room to get dressed in their street clothes and leave. Their lab garments stay inside the facility to be washed and sterilized.”
Along with the upgrades for containment, the Morden PPC3 lab has received various other renovations, among them new growth chambers, incubation chambers and ultra-low freezers, to provide a top-notch facility.

Heading Ug99 off at the pass
People who remember the wheat stem rust epidemics in Canada in the 1950s know this disease can cause huge yield losses. Since then, efforts to control the disease in North America, especially through resistant varieties, have been so effective that wheat stem rust research had been on the backburner until the emergence of Ug99.

“It was thought that we had defeated wheat stem rust and it was not really going to ever be a problem again. In Canada we haven’t had a stem rust issue in spring wheat since 1955, although in winter wheat there was a little epidemic in 1986. And still, in North America, we don’t have any problem,” explains Dr. Tom Fetch, a cereal stem rust pathologist at the Cereal Research Centre. He is leading the Ug99 research at Morden.

Ug99 is a virulent race of wheat stem rust that was first identified in Uganda in 1999. To date, it has spread as far north as Iran and as far south as South Africa. It is especially threatening to global wheat production because it has overcome Sr31, a stem rust resistance gene used in wheat varieties around the world for decades. In addition, Ug99 is also virulent on several other stem rust resistance genes.

“Ug99 has awakened the world to the fact that you have to be vigilant about what’s happening everywhere now. We have case histories to show that diseases like this have moved around the world, normally by wind currents, but also by hitchhiking on tourists, their clothing and other materials,” says Fetch, who has been working on Ug99 since 2004.

“So instead of waiting for Ug99 to arrive, we’re working proactively to have cultivars with resistance to Ug99 before it even gets here. Although we do have effective fungicides available, we don’t want to rely on fungicides because, environmentally, that is not the best way to go. We want to use resistance as our primary control.”

The PPC3 lab is vital to Fetch’s efforts “to head Ug99 off at the pass.” His research at the lab has two main components: “One is that we’re looking at samples of rust from various countries in Africa to see how far Ug99 has spread, and, more importantly, to see if there have been any changes in the strains. From the original Ug99 that was described about six years ago, we have now found seven variants, which have some slight changes in terms of the ability to attack specific rust resistance genes. The other work we’re doing at Morden involves looking for new resistance genes and evaluating germplasm with the idea of developing new wheat cultivars with resistance to Ug99.”

He notes, “Early on we found some resistance in two wheat varieties, Peace and AC Cadillac. We have been working with our plant breeders to develop lines starting with that base of resistance and then adding to it. The idea is to get a stack of resistance genes. If you rely on only one gene and the pathogen mutates to overcome that gene, then the varieties are susceptible; that is what happened with Sr31. If you stack several resistance genes together, then even if the pathogen mutates so it can attack one resistance gene, you still have other genes that are effective, so your variety isn’t susceptible.”

Containing ‘hot’ races of flax rust
Ever since the Morden containment lab received its initial PPC3 certification in 1989, Rashid has been using the facility to work on flax rust, potentially the most dangerous disease affecting flax. Back then, flax rust was a serious problem for Canadian flax growers. Rashid’s research has been instrumental in attaining and maintaining successful resistance to the disease since then.
“For over 20 years, we have seen no flax rust on the Canadian Prairies, where 99 percent of Canadian flax is grown. Some people say we have eliminated the disease, but I don’t want to say that because I don’t know if any inoculant has perhaps survived somewhere,” says Rashid.

“As a result of our research, we must have saved growers millions and millions of dollars over the years, and we’ve helped the environment because the disease is controlled without using fungicides. We have done this research primarily at Morden, and the PPC3 facility is one of the facilities we’ve used because we work with ‘hot’ races, or virulent races, and we have to make sure they don’t escape to the outside.”

Rashid uses the Morden PPC3 lab to study host-pathogen interactions at the specific race level for the flax rust pathogen and to develop resistance to the different races using multiple
resistance genes.

He says, “My flax rust research is aimed at making sure that we get genetic resistance to the most prevalent races of the flax rust pathogen on the Prairies. We have built multi-genic resistance in the cultivars that have been released in Canada – not only those released by Agriculture Canada, but also the cultivars released from the Crop Development Centre [at the University of Saskatchewan] and from Viterra over the years. We make sure they have all the genetics to be immune for rust before they are registered and released in Canada. By regulation, you cannot register a flax cultivar in Canada if it is not immune to rust, and immune means no infections at all, not even a single small infection.”

To make sure flax rust doesn’t reccur in Canada, Rashid also does surveys annually in Manitoba and Saskatchewan, where most of the Canadian flax acreage is, and every few years in Alberta, where much less flax is grown. He notes, “We have spread the word around that if anybody sees any sign of rust on any flax, we will deal with it right away.”

These latest upgrades at the Morden PPC3 lab enable the facility to continue to play its vital role in fighting against virulent races of plant pathogens that emerge in Canada or abroad. 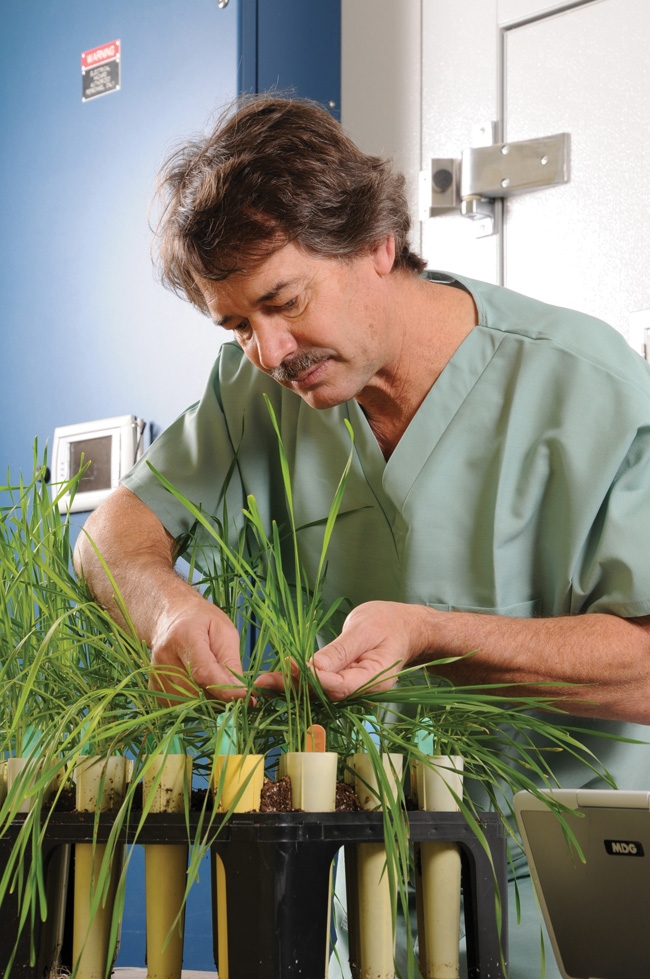 Inside the Morden PPC3 lab Recent upgrades to the quarantine facilities at the Morden Research Station of Agriculture and Agri-Food Canada (AAFC) are key to the fight against highly virulent diseases in Canadian crops.