Peter Johnson has a theory: if you don’t invest dollars in spring barley breeding, you won’t get the results you want.

In Ontario, 110,000 acres were seeded to barley in 2014, with a farm value per bushel rated at $4.16, according to the Ontario Ministry of Agriculture, Food and Rural Affairs (OMAFRA).

Even if barley has yet to catch up to higher-value crops in Ontario, Johnson — OMAFRA’s former provincial wheat specialist — hopes to increase the value of the crop for growers by updating nitrogen (N) recommendations.

Along with Shane McClure, a research lead for the Middlesex Soil and Crop Improvement Association, Johnson has just begun the third year of a three-year trial looking at potential synergies between nitrogen response and fungicide interactions in spring barley in Ontario.

“What we’re hoping to find are ways to increase yields on spring cereals to make them more competitive economically and keep them in farmers’ rotations,” Johnson says. “Spring cereals have a fit in Ontario agriculture, but the yield increases have not kept pace with corn, so acres continue to drop. We were hoping to find a good synergy between N and fungicides in barley, oats and spring wheat, so that we can find ways to increase yields and make them more profitable for growers.”

The nitrogen-fungicide synergy in winter wheat was “virtually proven” by 2010 in Ontario, says Johnson, following research he began in 2008 with colleagues David Hooker and Jonathan Brinkman. Since then, they’ve performed multiple studies to try to finish the response curve with and without fungicides.

For the spring barley study, four field scale trials were established across southern Ontario in spring 2014, followed by six in 2015, each using two replicate, randomized N rates, both with and without fungicides. Plots were also set up at New Liskeard and Winchester. The studies hoped to show — as in winter wheat — a strong synergy between nitrogen and fungicide applications.
This year, the funding dried up, but Johnson and McClure are continuing the study regardless.

“We’re essentially doing it for free. We thought it was important enough to do the third year,” Johnson says.

One plus one equals two
The results were different than expected: in most plots, the researchers did not observe a strong synergy between N and fungicide applications.

There are two potential reasons for this, Johnson believes: climate and genetics. The heat in southwestern Ontario tends to be a limiting factor. But genetics are even more telling.

“If you look at the trend lines in Ontario, winter wheat has gone up at about a bushel per acre per year over the past 35 years, while spring barley has only gone up at 0.2 bushels per acre per year,” he says. “The genetics aren’t there yet to show that synergy.

“We have AAFC breeders who are supposed to breed for all of Eastern Canada, but the barley breeder at the University of Guelph was rolled into the winter wheat breeder position. In terms of private interests, the one company doing that barley breeding has stopped doing it. The dollars invested in barley breeding in Ontario — there’s no comparison, compared to wheat.”

But the study’s results are not all negative. In New Liskeard, where the climate is much more suited to spring crops, a small synergy was observed between N and fungicide in spring barley.

The New Liskeard data set was small, but much higher final yields (115 bushels per acre) were observed there, along with evidence of a small synergy between N and fungicides. “That’s very hopeful, so now what we should be doing is looking at that synergy across varieties,” Johnson says.

The report concludes N response was significantly greater than recommendations in the Agronomy Guide in both the southwestern and New Liskeard regions, and so the recommendations require further assessment.

The data from this study will be brought to the Ontario Soil Management Research and Services Committee (OSMRSC), which makes fertility recommendations for the province, in hopes they’ll update the rates.

“Growers are certainly looking at this data and asking if it can work for them — they’re experimenting with higher rates than the official recommendations,” he says. “The recommendations are based on old varieties and the climate from the 1970s and 1980s.”

McClure says he was surprised by the high yields — and the high maximum economic rate of nitrogen — in the two years of the trial. “I didn’t expect the maximum economic rate of nitrogen to be as high as it was. I think it might have something to do with how high the yields were in general over those two years. They were fairly cool summers. I’m interested to see what happens if we see the same results as we did the last two years in a hot, dry year,” he says. 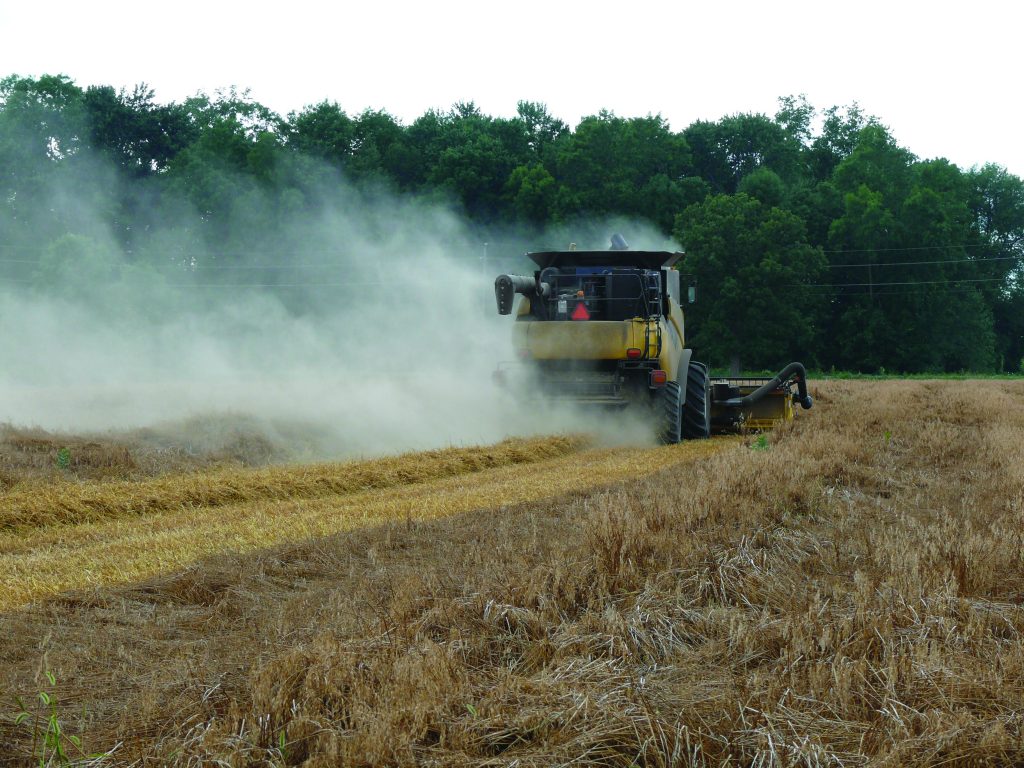 Shane McClure and Peter Johnson want to determine how to increase spring barley yields in Ontario.
Print this page