November 6, 2014 - A recently completed project shows that applying a whole suite of inputs can boost soybean yields consistently. Now the challenge is to refine this approach so the economics work.

The project’s aim was to investigate interactions and synergies among popular crop inputs for soybeans. “Individual inputs have been tested for many years to assess when and where it makes sense to apply fertilizer or seed treatments or fungicides or what have you to soybeans. But there hadn’t been an extensive study to try to pull everything together in a management system to see if there would be some synergy from applying multiple inputs,” explains Horst Bohner, soybean specialist with the Ontario Ministry of Agriculture, Food and Rural Affairs (OMAFRA).

Called SMART2, the project was a follow-up to the earlier SMART (Strategic Management Adding Revenue Today) studies about management of soybeans and wheat. The SMART 2 soybean project ran from 2011 to 2013 and involved field-scale trials led by Bohner and small plot trials led by Dr. Dave Hooker from the University of Guelph-Ridgetown.

The field-scale trials were conducted at 15 locations across Ontario in a wide range of Crop Heat Unit (CHU) zones. At each site, the researchers compared an adapted variety for the area to a long-season variety that required about 200 CHUs more than recommended for the area. For both varieties, they compared untreated soybeans to soybeans treated with the “Kitchen Sink.”

The small plot trials, located at Ridgetown and Exeter, compared most input intensities for three inputs –foliar fungicide, nitrogen fertilizer at planting time and foliar fertilizers – at normal versus high seeding rates. All of those treatments were evaluated for four adapted and four long-season varieties at each location.

Grain Farmers of Ontario (GFO), the Agricultural Adaptation Council (AAC), Syngenta and the Ontario Seed Growers Association were the major sponsors of the project, John Deere provided access to tractors and a sprayer and the co-operating producers loaned their time.  Kevin Robson acquired his MSc degree through the small plot research.

The field-scale results show the Kitchen Sink treatment is an effective way to increase soybean yields, but the yield increase is not sufficient to cover the Kitchen Sink’s total cost of $140/acre.

“In every case, we had higher yields where we threw the Kitchen Sink at soybeans. So soybeans do respond very nicely to a whole suite of inputs. The Kitchen Sink approach gave us about 5 bushels per acre extra in yield; and seven bushels per acre if you include the strategy of growing a longer-season variety. Those are very nice numbers in the soybean world,” says Bohner.

In the field-scale trials, on average, an extra two bushels per acre was achieved simply by growing the long-season variety rather than the adapted one. Since this practice involves no extra cost, Bohner says it’s a good way to increase yields and profits.

He notes, “On average, choosing a variety that takes advantage of the whole growing season, or as much of it as possible, will provide more yield. But there are more factors to consider than just the maturity whenever you compare varieties. You might choose a longer maturing bean that yields less just because of the genetics… so the longer-maturing bean has to be genetically capable of producing more yield.”
The plot trials produced similar results to the field-scale trials. The intensive package significantly increased yields of both the adapted and long-season varieties, on average.

Interestingly, the plot trials also showed tremendous differences in yield responses among the 16 soybean varieties. “Some varieties had no yield increase in response to the intensive treatment package, whereas others produced up to 10 bushels per acre extra,” says Hooker. “So we know that genetics interacts quite strongly with management.”

He analysed the small plot data to determine the relative importance of the inputs. “We found that 50 pounds per acre of nitrogen applied at planting gave only a 0.1-bushel per acre yield response, on average, but it cost about $50 per acre. So it wasn’t an important input whatsoever,” he says.
“Applying a foliar fungicide gave about one bushel per acre response, which is lower than what we would have expected based on other foliar fungicide experiments.

“However, the combination of a foliar fungicide and a plant population about 50 per cent higher than recommended gave a significant yield improvement of 3.6 bushels per acre [on average]. So there was a synergistic reaction.”

According to Hooker, the fungicide-plant population synergy could be due to a couple of factors. “There’s more disease pressure in a canopy of a higher plant population, so the fungicide is helping to control disease. Also, each plant, because it’s in a high plant population, is under a little more stress, and some studies have shown that fungicides may help a plant cope with some moderate stress.”

The synergy didn’t occur on every soybean variety. Hooker explains, “It seems to work only on varieties that stand well or are more responsive to high plant populations.” He says high plant populations are not a good practice for tall varieties that lodge easily, which in this study occurred mainly in long-season varieties or where nitrogen fertilizer was applied at planting. A lower than normal population may be better in conditions that tend to produce full canopy closure by full flowering (the R2 stage of soybean growth). Results from the small plot and field-scale trials underlined the fact that lodging can increase the risk for white mould and harvesting problems.

There was no yield response to the foliar fertilizers, which were applied between the R3 (beginning pod) to R4 (full pod) soybean stages, the timing recommended by industry.

Hooker and Bohner have some ideas about how to make intensive management of soybeans more economically viable.

He explains that fungicide companies have recommended applying foliar fungicides between the R3 to R4 stages, based on research conducted mainly in the U.S. However, in several recent Ontario trials, Hooker and his collaborators have been finding that R2 to R3 timing raises yields by about one to 1.5 bushels per acre compared to the R3 to R4 timing.

“That result is very significant because we would only expect about two bushels per acre in response to a foliar fungicide. So if we can get another one to 1.5 bushels, then a fungicide application would be much more economical, which would make fungicides an important piece in the intensive package,” says Hooker.

Similarly, other recent trials have shown yield responses to foliar fertilizers applied between R2 and R3. And the timing effect of foliar fungicides plus foliar fertilizers was detected in some 2013 experiments. Hooker is verifying those results in 2014.

Getting a better understanding of varietal differences in response to inputs would be valuable, too. Bohner notes, “When it comes to the approach of throwing everything at soybeans, we do not have at this time a way to predict which varieties will really respond. We’re trying to see if there is a genetic component to that, but I’m not sure we’ll have the answer any time soon.”

Variable-rate input application could also improve the economics of intensive management. “Some parts of a field will respond much more than other parts of the field to inputs. For instance, a part of a field that is very lush in growth with high fertility may respond better to a fungicide. And a poor part of the field that grows short plants and has a hard time in producing a lot of yield will probably respond much better to a higher seeding rate,” explains Bohner. “So using variable-rate application might reduce input costs. If you only apply the inputs on, for example, the 50 per cent of the field that really responds to them, then you are already in an economically viable situation with the package that we have here.”

Hooker adds, “We know [from our research] that a site-specific approach to treatment application works in wheat, and we have similar projects ongoing in corn. I think this type of research needs to be done to move the yield bar ahead in soybeans.”

Bohner and Hooker hope to get funding for some variable-rate management soybean research in the near future to look into questions like how different soybean varieties vary in their response to various inputs across a field, what are the underlying reasons why certain parts of field have higher yield responses, and how to determine where to apply different inputs.

Next step, with a difference

Bohner is also trying a very different approach to get greater yields. “We’ve shown that making the plant as happy as possible – for instance, applying fungicide if there’s disease, or fertilizer if there’s a nutrient deficiency – will produce more yield very consistently, but the yield increase is not as much as we would like,” he explains. “I’m now pursuing an entirely different strategy with some of my research. I’m trying to figure out how to get the plant to retain more of the flowers and pods that it already sets and to bring those to yield.”

He thinks this approach might work because the soybean plant over-flowers so much. “In a 40-bushel crop, perhaps 50 to 70 per cent of the flowers never mature all the way through to seed. Either the flowers are aborted or the pods are aborted early on. So the question is, how can we get the plant to retain more of those flowers and pods through to final yield?”

Bohner is trying all sorts of things to trick the plant into responding with greater pod set and retention. “Part of it may be to make the plant happy, but part of it is to stress the plant at the right time, for instance, using different growth hormones, applying herbicides, even some cutting of the plant and multiple passes of different compounds.”

Although there is more to learn about ways to increase soybean yields and profits, the SMART 2 trials and other studies by Bohner and Hooker have confirmed several key practices that would increase yields for many Ontario growers.

“We know potassium is lacking in about 20 per cent of Ontario soybean fields. So applying potash to increase the soil test to a minimum level for soybean production would significantly increase yields. That is probably the biggest thing. In 2014 many fields had significant lodging issues. One of the reasons for this is insufficient soil potassium levels,” says Bohner.

“Proper variety selection for a specific field – matching the genetic capability of a variety and its package of disease and insect resistance or tolerance to the specific field – would be another big step forward.
“And the third is planting early, within reason, for the specific CHU zone, and marrying that with a longer-maturing soybean.”

Hooker adds, “The crop rotation work we’ve done so far has shown that having wheat in the rotation can increase soybean yields between four and six bushels per acre. That’s with no extra inputs in the soybeans. So crop rotation is even more important than all of these inputs we’ve looked at in SMART 2.” 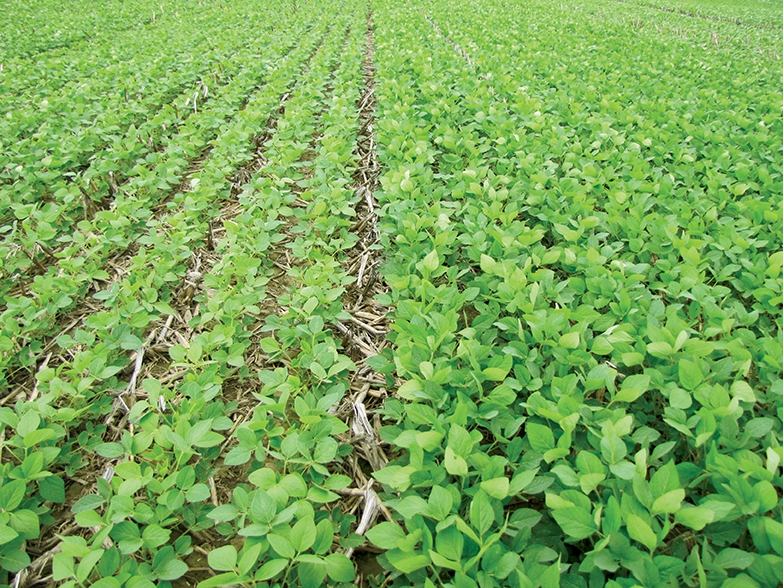 The “Kitchen Sink” treatment (right) boosted yields by about five bu/ac for the adapted varieties and seven bu/ac for the long-season varieties A recently completed project shows that applying a whole suite of inputs can boost soybean yields consistently.