A wide number of alternative plant hosts seem to be acceptable for oviposition and larval development of swede midge. 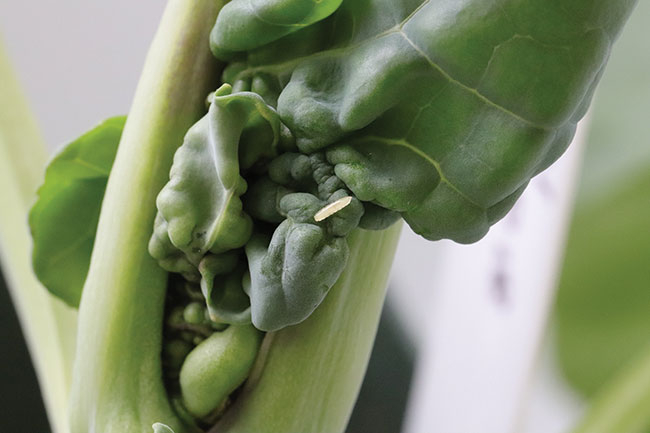 A swede midge larva on an infested canola plant, with crumpled leaves that are typical of swede midge damage. Photo courtesy of Jonathon Williams.

Swede midge is a serious crop pest, causing significant damage to canola and other brassicaceous vegetable crops in Eastern Canada. Although swede midge has not yet made its way west to the Prairies, it has the potential if it does to seriously impact canola and other crops like mustard and camelina, as well as weeds species as alternative hosts.

In a four-year study initiated in 2016, researchers at the Agriculture and Agri-Food Canada (AAFC) Saskatoon Research and Development Centre set out to gain a better understanding of the chemical ecology of swede midge and the range of potential hosts on the Prairies. The study examined the host range of swede midge with an emphasis on common brassicaceous weeds found on the prairies and the host plant resistance in these weed species. The research also investigated the potential biochemical basis of resistance and examined the factors that make plants susceptible to swede midge damage.

“This project was initiated by AAFC researcher Julie Soroka and I took over as project lead when she retired,” explains Boyd Mori, now assistant professor and NSERC Industrial Research Chair in Agricultural Entomology at the University of Alberta. “We were interested in determining if swede midge ever did become established on the Prairies, what plants could potentially be potential hosts, and whether or not any had potential resistance against swede midge. We selected 12 different species for the study including crop plants canola, mustard and camelina, as well as several common weed species, such as flixweed, stink weed, ball mustard, pepper grass and others. Since we do not have swede midge on the Prairies, this study was completely lab-based except for weed seeds collected from the field.”

To determine which plants swede midge preferred as hosts, researchers conducted two main experiments using a no-choice and a choice treatment. For the no-choice experiment, swede midge were provided with a single plant to determine if they would accept the plant as a host for oviposition, or egg laying, and larval development. In the choice experiment, swede midge were placed in a cage with the 12 different plant species at the bud growth stage, the stage suitable for oviposition, to determine if they showed a preference for specific plants as a host or not.

“The results from the no-choice experiments showed that swede midge used all of the plants as acceptable hosts for laying eggs and development, except for flixweed,” Mori notes. “In the choice experiments, the swede midge did show some preferences among the different species, with the cultivated crops canola and mustard being more attractive than the weed species. However, among the other alternatives, the swede midge showed a lower preference for camelina, flixweed and pepper grass as hosts when given a choice, indicating possible plant host resistance. The results showed there is a wide variety of alternative hosts that swede midge would use for oviposition and larval development. We also compared how quickly the swede midge developed across the different hosts to see if they might develop more slowly on some than others. The results were variable, but overall the swede midge developed at a similar rate on most of the potential hosts. We also investigated some biochemicals such as glucosinolates of selected plants as a basis for resistance, however this did not seem to be a factor on whether or not the swede midge would use the plants.”

Researchers also investigated how plants interact with the swede midge, and plant susceptibility factors to swede midge feeding, by monitoring gene expression in a comparative transcriptome study. A moderately susceptible canola line, B. napus (AC Excel), was grown until the six-leaf stage in the greenhouse, then infested with swede midge larvae. RNA was extracted and sequenced from plants at zero, three and 10 days post swede midge infestation, and an analysis of the transcriptomic data and plant hormones performed.

“Although we are still working through the data analyses, the early results show there are several plant genes of interest, some that the swede midge are essentially co-opting from the host,” Mori explains. “We found that when the swede midge is feeding on the plant, there is an upregulation of genes usually associated with plant growth and changes in morphology, as well as genes associated with the breakdown and growth of plant cell walls. These genes may be involved in swede midge gall formation, which can result in severe plant deformation and yield loss. However, some of these genes may also be required by the plant for their own growth, so further investigation of these genes and their involvement in gall formation is warranted to potentially develop resistance to swede midge.” 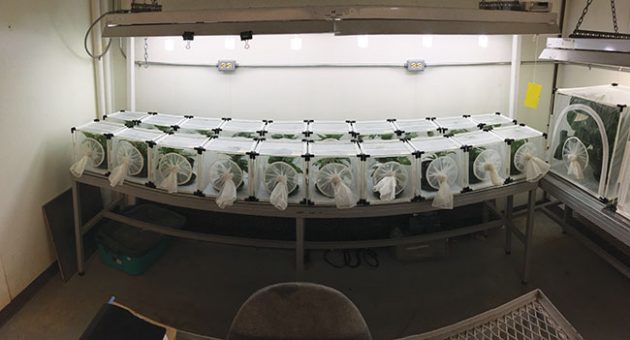 The no-choice bioassay experiment setup in the laboratory.
Photo courtesy of Boyd Mori.

Although not planned as part of the project, researchers made a very important discovery when they first initiated the project. The midge that were collected from the Prairies to start the lab colony for the research turned out not to be swede midge (Contarinia nasturtii) as assumed, but were identified as the new to science canola flower midge (Contarinia brassicola). “Up until then we assumed we had swede midge because of the galls on canola,” Mori explains. “However, unlike swede midge that are known to be easy to get established in the lab, we kept having failures in getting the colony established. The canola flower midge turns out to need a very specific plant stage in order to lay eggs on, which swede midge don’t. So although these two small midges both use Brassicas and are within the same genus, they are not actually that closely related and look quite different. For this project we did use swede midge for all of the lab experiments conducted.”

Mori emphasizes the good news for growers in Western Canada is that the canola flower midge in not an issue, unlike swede midge, should it ever get established on the Prairies. The canola flower midge seems to use only one specific stage when the flower buds are forming to lay eggs and so far populations are low. On the other hand, swede midge uses many different plant parts and can have four or five generations a year, building populations quite quickly causing significant crop damage. Research led by Rebecca Hallett at the University of Guelph has also identified a parasitoid associated with swede midge with high parasitism levels in some fields, and is a promising development for biocontrol.


Related
Assessing the swede midge threat
What we know (so far) about the new midge on the Prairies
Stamping out swede midge?
Strategies for managing swede midge