Nitrogen (N) fertilizer management continues to be a priority for farmers and researchers, with a large research focus on the effect of N management in the year of implementation. However, researchers also want to understand the longer-term implications of N fertilizer strategies and decisions in a cropping system. 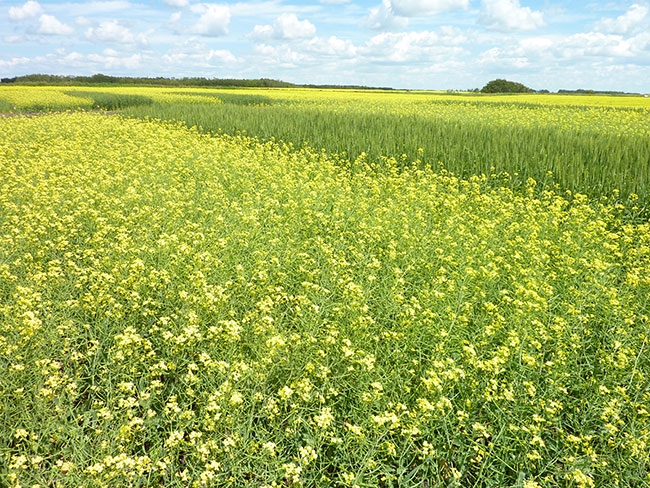 The focus of the original management study, conducted near Brandon from 2010 through 2013, was to determine the effect of N rate and timing on crop yield, and on N uptake and removal by the crop. The project involved a two-year canola/spring wheat rotation and various N management practices were studied. The study treatments ranged from control plots receiving no N fertilizer to treatments receiving 150 per cent of soil test N recommendations in one of four years.

“In 2013, the final year of the management study, the study produced good wheat yield averaging about 3700 kilograms per hectare (kg/ha), but very poor canola yields due to poor emergence,” Mohr says. “This provided us with a unique opportunity in the follow-up study to compare the effects on N availability of growing a poor- versus higher-yielding crop. Although this study was conducted in Manitoba, results are expected to apply to similar ecozones in Saskatchewan.”

The objectives of the follow-up study were to determine the effect of previous N management on plant-available N levels in two subsequent growing seasons (2014 and 2015). Researchers also wanted to measure the effects of a preceding crop failure versus a productive crop on N availability in the two following growing seasons.

In 2014 and 2015, wheat receiving no N fertilizer was established across the entire experimental site of the previous canola-wheat rotation. In both years of the study various measurements were taken, including plant stand, grain and straw yield and N concentration, protein, test and seed weight. Soil samples were collected periodically over the course of the study including fall samples at a depth of zero to 15, 15 to 30 and 30 to 60 centimetres.

“The results of the study showed that there were residual effects of both preceding crop and preceding N management in 2014 and in 2015,” Mohr explains. “In comparing the results in 2014, we found higher grain yield and increased N availability following the poorly-yielding 2013 canola crop compared to the higher-yielding 2013 wheat crop. This was likely due, at least in part, to lower N demand and removal by the 2013 canola crop compared to the wheat crop in 2013, which utilized that N to grow the crop and was taken off in harvested grain. The results confirm what we would generally expect to see, but the study allowed us to quantify what those differences were.”

These findings demonstrate that preceding crop productivity and N management have the potential to impact N availability in the cropping system in subsequent years under prairie conditions, and therefore should be considered when making N management decisions. For example, where higher rates of N had been applied in the past, there seemed to be evidence of greater N availability in the subsequent year. Various factors may influence residual N levels in a cropping system, from overlaps in equipment passes that contribute to higher than planned fertilizer N rates in select areas of a field, to growing season conditions that result in lower or higher crop N uptake and removal than expected.

“Therefore, it is important to keep these residual effects in mind when managing N. Soil testing provides a useful tool for measuring how much plant-available N is in the soil, so that fertilizer management decisions can be adjusted accordingly,” Mohr says. “This soil nitrate, together with N mineralization during the growing season, will contribute to the N supply available to the crop. Knowing what soil test N levels are and looking at what crop N demands are expected to be are important to consider when making fertilizer decisions. The key is to consider these N residual effects, regularly soil test to know where your N levels are at and make fertilizer decisions accordingly.