A team of University of Guelph researchers at the cutting edge of discovering how plants communicate with one another has proven the stress of “seeing” weed competition causes a plant to significantly change growth patterns and drop yield. 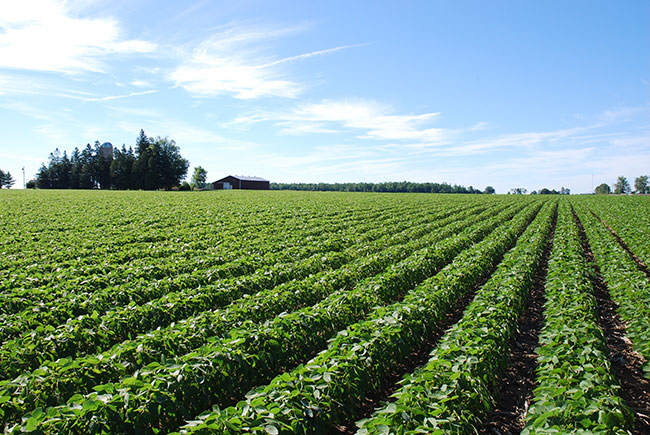 A team of University of Guelph researchers are at the cutting edge of discovering how plants communicate.

According to the research, plants detect neighbouring plants by constantly analyzing the spectrum of light reflected from surrounding surfaces. When the reflected light indicates the presence of competition, plants rapidly alter everything from root structure to rate of leaf appearance. Seedlings that perceive competition via this form of communication lose yield incredibly quickly: a discovery that has enormous implications to crop production.

“From a breeding standpoint, scientists talk about insect and disease tolerance, but no one really asks if it’s possible to make a plant more tolerant to weeds. That was our starting point,” says Clarence Swanton, a weed scientist, crop physiologist and lead of the study.

First, there is no one, single, consistent trait that improves a plant’s ability to compete. The team looked at plant size, height, root structure, leaf density, planting density, row width and on and on, but could not find a single trait that universally improved a plant’s competitive edge.

“If you were asked to design a competitive plant, you’d choose fast germination, rapid leaf growth, lots of leaves. But none of that actually works. There’s nothing on the morphological side that actually improves a crop’s ability to compete,” Swanton says.

Back in the late 1980s, Swanton was part of a team that studied yield loss in corn. According to this research, a corn crop’s ultimate yield drops by between 0.5 and 3.3 bushels per day when weeds are present, depending on how early in the growth cycle the weeds appeared and how long the weeds were left growing.

“What we couldn’t understand is how could it happen that fast? If you’ve done your agronomy right, you’ve just put tons of fertilizer on, so there shouldn’t be any competition for nutrients. The crop should be up ahead of the weeds, so there shouldn’t be any competition for light. And in the spring, there’s generally lots of moisture. That’s when we started asking: can a plan actually detect its environment? Can a plant know who its neighbour is and respond to that neighbour?” Swanton says.

Fast-forward 30 years and Swanton finally has a clear answer. To test this hypothesis, Swanton and his team grew plants beside one another but isolated in separate pots so no actual competition or physical interaction could occur. Corn plants grown next to weed plants exhibited decreased synthesis of chlorophyll, decreased carbon dioxide assimilation, decreased sucrose levels, an altered root structure, decreased growth rate, changed leaf structure and – perhaps most interestingly – an explosion of free radicals in the cells.

Fascinated, the team then planted a tobacco plant right in the centre of, but entirely physically separated from, a ring of grass. In trial after trial, the tobacco plant became so stressed by the presence of the grass that it actually died.

“I was gobstruck,” Swanton says. “This communication is for real and it’s powerful.”

A plant experiences physiological stress when surrounded by other plants. This stress causes an energy imbalance that results in toxic molecules of oxygen called free radicals. Typically, free radicals are contained inside cells and are removed via a clean-up crew of antioxidants. When their quantity exceeds a certain threshold, however, they spill out of the cells and become destructive. Free radicals cause damage by stealing electrons from cell proteins, DNA and other parts of a cell. This internal damage (called oxidative stress) requires significant energy to repair. Energy directed towards damage control is energy lost from seed production, translating to lost yield potential.

“We’ve proven plant competition is not about light, water or nutrient competition. It’s about causing an energy imbalance in cells. You don’t see this, of course. The plant looks totally normal on the outside, but it is screaming on the inside,” Swanton says.

“Other stressors like drought, insect damage, etc., can cause similar physiological changes. We think that plants have a common toolbox when they are under stress. To change the stress response would probably mean a plant loses the ability to be plastic – to be able to alter growth. Plasticity is generally a survival mechanism.” 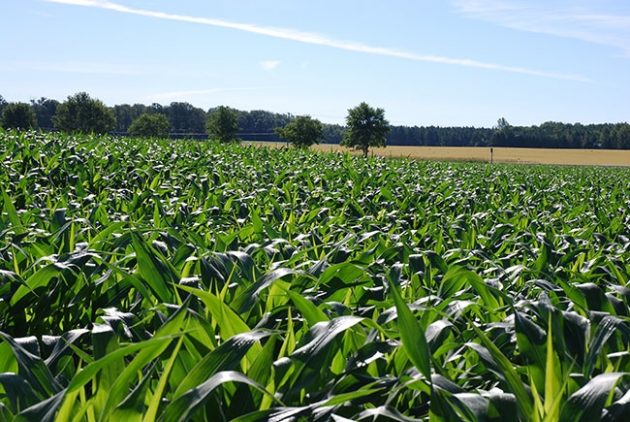 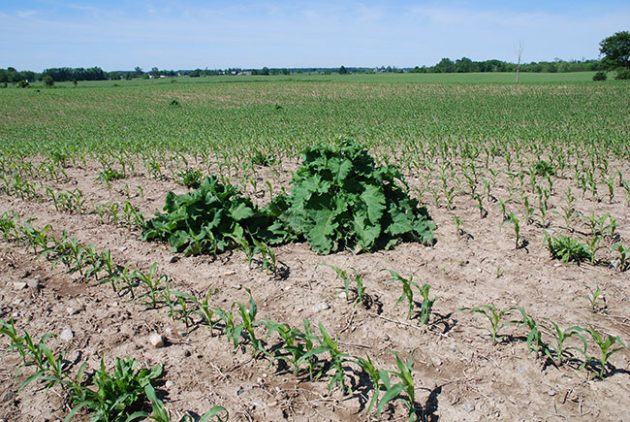 The team found that certain germinating seedlings are able to analyze and respond to neighbouring plants even before they break through the soil surface.

Currently, Swanton’s team is working to determine whether plants exhibit a stress reaction to individuals of their own kind, or only to plants that differ from themselves. So far, they have established that soybeans are able to recognize different plant species and alter their growth depending on the neighbour. Corn does not show any response to its siblings but does show a response to weeds.

The team has also proven that certain germinating seedlings are able to analyze and respond to neighbouring plants even before they break through the soil surface. As a seedling gets close to the soil surface, it begins to detect the light from above ground. In the presence of weeds, these soybeans will actually change how they are growing prior to emergence.

“What we are realizing is that plants have evolved to rapidly respond to their environment. Normally, you might think of a plant being sort of boring. The reality is that they are like a computer chipboard, reading and rapidly responding to inputs from the outside,” Swanton says.

There are currently no chemicals available in Ontario that can reduce a crop’s oxidative stress. That said, Swanton’s team has discovered one more fascinating fact about crops’ response to weed pressure: neonicotinoid seed treatments stop the oxidative process in its tracks.

“We found that if you had seeds treated with neonics, you negated all stress response. The seed treatment triggers the expression of antioxidants. All free radicals: gone. All evidence of stress: gone. Root structure: stable. All of [a] sudden, we’re seeing a seed treatment as a gene trigger. We had to do the test four, five, six times over because I didn’t believe the results when they first came in,” Swanton says.

Though this research is only in its early stages, it already offers important take home messages for producers. First and most obvious is the fact that early season weed control is absolutely critical.

“The presence of weeds causes stress that results in rapid and irreversible yield loss,” Swanton says. “The impact of stress early in the development of the crop determines its growth trajectory for the rest of the season. Even if you remove the weeds, the final yield will never come back to 100 per cent even though the plant has the whole growing season ahead of it.”

Second, a plant cannot differentiate between a “farmer-approved” neighbour, such as a cover crop, and a run-of-the-mill weed.

“Cover crops are definitely the flavour of the week right now. Farmers don’t view them as weeds and are more tolerant of them in amongst crops than they would be of weeds. Our data suggests you’d better see cover crops as weeds, because that’s how your crop sees them,” Swanton says. “This is particularly relevant to those who want to plant green or underseed too early into cover crops. If you don’t understand the critical crop growth period, you will always have yield loss.”

The research team’s next step is to determine whether plants experience stress when confronted with another member of their own kind.

“Can a soybean recognize a sibling? No one knows what the physiological mechanism of this recognition ability really is. But whether they do or don’t could have major implications for factors such as seed spacing,” Swanton says.

He and his team hope that, once they more fully understand the communication and stress mechanisms in plants, they might eventually work with a breeder and molecular biologist to build more resilient crops.

“Once we understand what switches genes on and off, we can look at how we can make a plant more tolerant to weed stress,” he says. “It’s exciting, exciting work. It sure gets me out of bed every morning!”