The need to ‘dig in’ never so important. 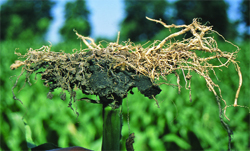 Roots. They mark the beginning of a plant’s development, they are the conduit through which nutrients are channeled from the soil and into the plant, and they provide an anchor in the soil as the plant matures. Yet the assumption of so many in agriculture seems to be that as long as a plant looks good above the surface, everything must be okay below.

The 2007 growing season should be remembered as the year that showed growers across much of southern and central Ontario just how wrong that assumption really is. Some may insist that the problems growers encountered were more related to the lack of rainfall during the mid summer. Or that compaction caused late in 2006 created the most difficulty. To some extent, both scenarios are correct. However, it comes down to finding the real ‘root cause’: most people take roots for granted.

Steve Redmond, an agronomist and certified crop advisor with Agri-Trend Agrology, knows first hand of the neglect that growers show their crop roots. He also emphasizes that the neglect is not intentional as much as it is misunderstood. One of his customers had applied manure in the fall of
2006, believing the soil to be dry, when in fact it was saturated roughly four inches below. The resulting compaction stunted the growth of the corn to the extent that the grower applied some 28 percent believing his corn was not getting enough nitrogen, despite the manure.

Redmond took him to the field, dug up a root ball to examine its condition, then asked the grower to dig. “As soon as he started trying to dig in, you could just see his mind click, he realized that there was something more to this, and he said, ‘I can’t even get the shovel in the ground’,” relates Redmond, who is based near Lucan, Ontario. He brought some of his Agri-Trend colleagues to a second field with similar symptoms and they confirmed his diagnosis. “If your shovel can’t penetrate the soil, it means you have a root growth issue and your roots can’t penetrate through that compacted layer.”

Critical part of growing season
Redmond believes there is a point in the growing season that is particularly critical where roots are concerned, and he refers to it as a transition phase. In corn, it is at the six to eight leaf stage, where emergence and colour can be good one week and then the next week the corn appears to be going backwards. He may get a call from a grower complaining of yellowing
corn. “But that’s that transition phase where it’s sending out its secondary root system and even in a normal year, the corn kind of stalls, and the transition into that secondary root system means new roots struggle to get through maybe an inch of tough soil,” says Redmond, adding that a tough soil layer is not the same as compaction. “Once the roots get through that layer, away they go. The corn greens up again, or we have a rain that helps it along, and it’s out of that transition and knee high, and you forget about it yellowing.”

In 2007, that transition phase was hampered not just by ‘tough soils’ but by a new compacted layer that was as much as two inches thick instead of its normal half to one inch. “Then it becomes a balancing act and the plant just doesn’t have enough carbohydrate reserves to get through that, so the corn just stalled and stayed yellow and we didn’t get any rains to coax it through,” says Redmond. “If we could have had some rain to feed the roots in the top four inches, it might have been able to produce enough sugars and drive some root growth. But in that period you had the compacted soil and no rainfall, so those plants never recovered.”

Issues relating to logistics
One thing to remember in the discussion on roots: underlying all of the talk of compaction and not wanting to dig for answers is a matter of pride. According to Peter Johnson, the logistics of
managing in an industry that is so governed by variable weather make it difficult to always abide by the ‘right way of doing things’. “If I have to get the corn out of the field and it’s really too wet, then I’m out there when it’s too wet because the snow’s coming or another rainstorm is coming,” explains Johnson, the cereal specialist for the Ontario Ministry of Agriculture, Food and Rural Affairs.

When it came time to plant his soybeans in the spring of 2007, Johnson planted his field, including areas where he knew the soils were not dry enough. “But they were calling for rain and I thought, what are my options? So I planted and it didn’t rain, and now I have compacted soybean root systems, but I knew what I was doing and that it was a risk.”  In part, he adds, growers need to forgive themselves for accepting risk only to have it come back and hurt their production in a season. And Johnson does worry that less than five percent of growers typically do a little digging to learn more about their soils, including root health and the presence of diseases or pests.

Another point to consider is the kind of information growers are gathering. Most have access to the internet and subscribe to numerous publications. An article from a US university might make the point that soybean aphids are an every-other-year occurrence and be talking about a specific area of that state. Yet the same is not true for Ontario.

Bottom line is that growers should keep 2007 in mind, because this is the year that really drives home the importance of a good root system,”

says Johnson. “Where you had good soil and good soil health, you will have good yields despite the unprecedented lack of rainfall. There are still guys that are going to get average yields in 2007 and that’s outstanding, but unless you go out there and look, you have no clue exactly what is happening.”

Five tips to better root health
1. Get out of the truck
Determining whether a soybean field is suffering from soybean cyst nematode or a nutrient deficiency is an unpleasant task. However, diagnosing cannot be done from the side of the road.

2. Carry a shovel
It may sound like a broken record, since OMAFRA personnel, advisors and seed and chemical dealers are likely to make the same recommendation, but that is only because it works. Never under-estimate what the ‘shovel can show’.

3. Have some vinegar with your soil
Believe it or not, a little vinegar can actually be an indicator of soil erosion. Sprinkle some on the soil surface. Much of the soil in southern Ontario sits on a limestone base, so if the soil ‘fizzes’, the acid of the vinegar is reacting with a higher pH soil, indicating the presence of limestone and evidence of soil erosion. To confirm, use a soil probe sample and sprinkle with vinegar: if fizzing occurs from top to bottom, effectively all top soil has been eroded and is gone. The general rule, says Johnson, is that if there is less reaction, the higher the soil organic matter and the better for roots. This does not apply on all sand soils.

4. Learn from what roots have to say
In Germany, growers determine when to apply their first nitrogen on wheat by checking for new white root growth, a sign the plant has broken dormancy and is starting to grow. Those new roots are the mechanism for taking up nutrients early next spring.

5. Open the mind
As equipment changes, field habits may need to change. Steve Redmond provides an example of a farmer last fall who was leaving strange strips of unharvested corn in his fields as it made its rounds. This farmer has avoided using a grain buggy for years and in the wet soils of 2007’s harvest had figured out a system of combining that minimized travel to the wagons when the grain bin was full. It did not appear conventional but was really a stroke of brilliance to minimize soil compaction. He will reap the benefits for many years. There are always exceptions to the conventional, risks to be taken and new directions to forge. Do not be afraid to buck the standard.