Many farmers now have autosteer, and rely heavily on it. Others, not so much. For those who are interested in adding GPS autosteer to a tractor they already have, or interested in buying a tractor already equipped, here’s the background you’ll need.

GPS lightbars were the first effective guidance device to come along, in the early 1990s. With a specialized radio antenna and receiver, they could convert line-of-sight signals from U.S. Global Positioning System (GPS) mid-level satellites into location co-ordinates on the ground.

By 1994, the earth had 19 GPS satellites stationed in orbits. Approximately 32 are available now in six orbital levels.

Similar systems are being developed. The Russian Global Navigation Satellite System (GLONASS), originally military, was opened for civilian use in 2007. The European Union is developing the Galileo positioning system; China, India and Japan have plans for navigation systems.

Collectively, they are known as the Global Navigation Satellite System or GNSS. Some receivers built since 2007 can work with GLONASS as well as GPS.

Continuous, relatively weak, time and location signals are broadcast by these satellites in a dedicated section of channels (or frequencies) on the broadcast band. Receivers require signals from four satellites to determine location. Internal calculations triangulate field position from the overlapping signals.

“Way back you had 12 or 24 channels. Now it’s way beyond that. More satellites at one time means more coverage, not more accuracy, especially in areas blocked by hills or trees,” Mackay says.

WAAS accuracy
GPS or GNSS alone is inadequate for positioning a tractor in a field. Systems were developed with a ground-based component to correct/fine-tune/augment the basic GPS calculations.

Accuracy was improved with the development of Satellite-based Augmentation Systems (SBAS). They produce correction signals that improve repeatability with the aid of ground base stations that are precisely surveyed and able to collect signals from GNSS satellites. Another term for this is Wide Area Differential (WADGPS).

The Federal Aviation Agency operates the Wide Area Augmentation System (WAAS), which is a form of SBAS. WAAS has a network of ground-based stations that measure small variations in the GPS signals and high-altitude, geo-stationary satellites. It generates a correction signal that is sent every five seconds.

The U.S. Coast Guard operates an alternative, the Differential Global Positioning System (DGPS), for the United States. This system relies on a large network of ground-based stations that generate and broadcast corrections signals without using geo-stationary satellites.

Every receiver for farming today in Canada is enabled for WAAS or DGPS. There is no charge for using the WAAS signal, which can produce a location accuracy of about eight to 12 inches.

WAD accuracy
Private subscription-based commercial systems have been developed to improve the accuracy of correction for farming. Together, OmniSTAR and StarFire are known as wide-area differential (WAD) GPS service providers.

Many GPS receivers work with OmniSTAR, which became available in 1994. The company today has four levels of signal correction service.

The lowest accuracy correction signal, OmniSTAR VBS, uses a single frequency L1 receiver. L1 refers to a radio frequency band, between 1559 and 1610 MHz. The VBS horizontal position error is described as “significantly less than 1 metre” for 95 percent of the time.

OmniSTAR G2 service, the latest advance, provides short-term accuracy of one to two inches and long-term repeatability of better than 10 centimetres, 95 percent of the time. It uses both GPS and GLONASS satellites.

A similar correction service, CenterPoint-RTX, was announced in January 2012 by Trimble.

In effect, RTK resembles a survey instrument for farming. For instance, tripods equipped with a second GPS receiver can be placed at the corner of a field, or elevated to a tower or other high point, to send line-of-sight correction signals to equipment moving in the fields. Machinery dealers have developed RTK networks for customers in some regions.

“RTK is the big thing now,” Mackay says. “Guys want to get into inter-row seeding and controlled traffic farming.”

A grain farm equipped with RTK and 10-inch drill spacing, or tighter, can drill the new crop midway between the stubble rows of an earlier crop. That concept became achievable with RTK autosteer, as did tramline-type farming, in the past five years.

Since about 2010, RTK services through cellphones or the Internet have become available. A cellular modem installed in the receiver, or even the driver’s cellphone, may be used to bring a high-accuracy correction signal to the steering control.

Continuously Operating Reference Stations (CORS) and Virtual Reference Stations (VRS) are two of several names for the ground-based networks now providing RTK for farming. Some U.S. states provide the service without charge through the Department of Transport.

Implement steering is becoming significant in relation to GPS autosteer accuracy discussions. Implements are being equipped with GPS receivers and a communications link to the controller in the cab. Thus, autosteer is applied to the implement for centimetre accuracy regardless of the tractor’s position on a slope.

Steering components
Manual steering within field boundaries is being replaced with one of two methods. One is permanently installed into the steering hydraulics and wiring. Integral autosteer is generally regarded as the most accurate way to control the machine. Some manufacturers already install it at the factory, and will fully service or warrantee the system.

The second method uses a transferable device that attaches externally to the steering wheel. It probably can be moved in less than 30 minutes to another machine. It has been sold as a lower-priced and only slightly less accurate option.

Aftermarket autosteer-makers are making equipment for both methods of autosteer as well as installation kits for tractors, sprayers and harvesters that were built before the age of autosteer.

Controllers
Since about 2006, autosteer system components have become able to talk to each other through manufacturer compliance with a new international protocol for agriculture known as ISO 11783. It is seen in new electrical connectors, for instance, that link a tractor’s cab electronics with the electronics in whatever cart or implement it is towing. Regardless of make, if the units are ISOBUS compliant they should be able to work together.

Mackay says, “It’s becoming a trend to use ISOBUS plug and play. Via ISOBUS, one manufacturer’s autosteer controller can be plugged into another manufacturer’s existing tractor hydraulics.”

About 11 makers of controllers for GPS autosteer farming are available. The controller is a form of computer, operating with various software programs and storing field information in internal memory. It can be fed with certain types of data, such as previous field maps and “prescription” maps for applications of seed, fertilizer or chemical.

Controllers operate the monitors or displays in the cab, plus the autosteer units and rate controls for applications.

They also create files that store logs or data of whatever is going on in the system. Mapping, or a system of geo-reference files, are being created continuously.

Some lightbars still are being manufactured. They still require manual steering, but have some of the memory and display associated with GPS autosteer.

Autosteer software
Autosteer software enables a controller to keep a machine on course from pass to pass in a field. The accuracy will be as good, or weak, as the signals that are being processed. In practice, more than 95 percent of the time, each pass will be perfectly parallel to the previous pass. The first pass can be done manually, or it already can be done using specifications stored in the memory from a previous operation in that field. Once the field has been mapped, the controller needs only to establish its exact location before starting a new operation in the field.

One difference in controllers is pattern recognition. Most can do a few patterns, like straight A-B, curved A-B, or pivot.

Controllers also generate different displays of a field, depending on their software and hardware. Most will give two or three views of the field map and the machine’s location in the field.  Video cameras mounted on the machinery also can be plugged into some displays, so a driver can monitor what he can’t see from inside the cab.

Autosteer pricing
Pricing for autosteer components has come down dramatically as industry has tooled up and the market has grown.

An informal dealer survey in January indicated hydraulic-mounted RTK autosteer can be purchased in a pricing range of about $15,000 to $30,000 for all the components. Without RTK, expect to pay $10,000 to $15,000. A new steering wheel-mounted autosteer system will retail for perhaps $16,000 at the high end and for less than $6,000 with only WAAS access.

The big choice for most farms that want autosteer will be in where to buy it, according to Mackay.

“Shop around?” he asks. “That depends on whether you want an aftermarket system or a factory-installed and serviced system. Dealer support is important. Fine-tuning the autosteer can sometimes take a while, so you want to make sure the manufacturer will provide that support.” 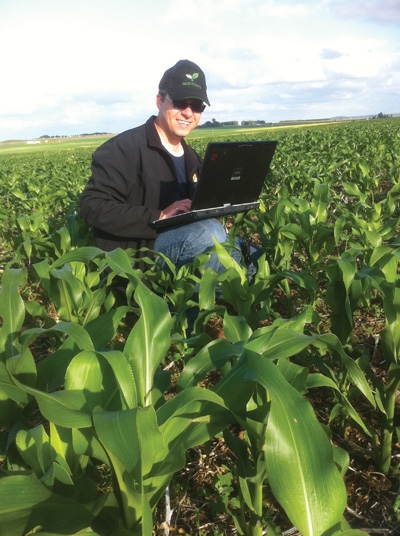 
Related
Soybeans performed well in 2012
From the Editor: February 2012
Canola top revenue crop in 2012
Western bean cutworm: what to expect in 2012