Precision Ag
What role do drones have on the farm?

Few agricultural technologies capture people’s imaginations as much as unmanned aerial vehicles (UAVs), more commonly known as drones. Since the first day a UAV looked down on a crop field, farmers have dreamed up a million ways that a bird’s eye view and remote access could improve agricultural operations. 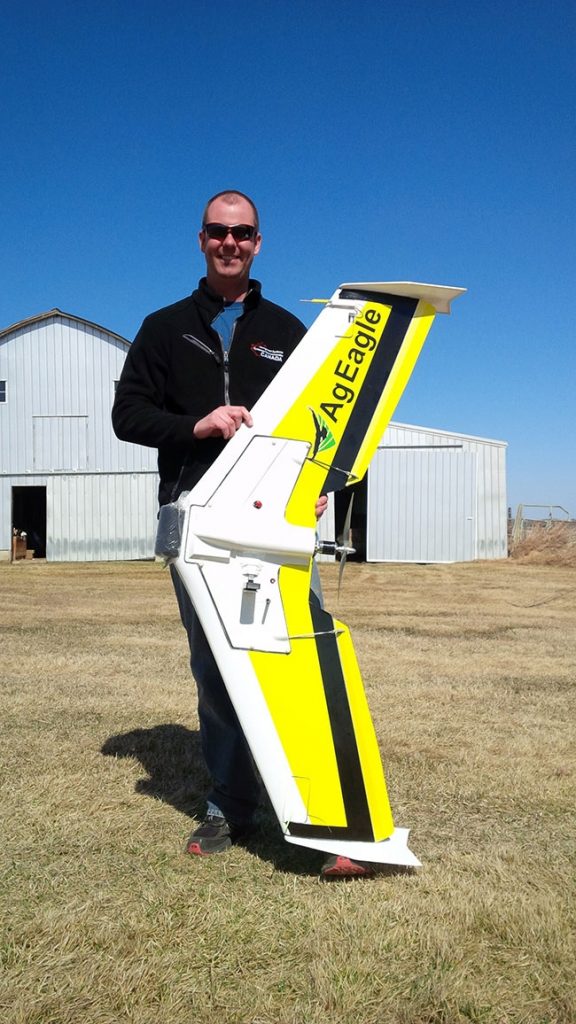 While some of that functionality is achievable by today’s UAV technology, much more is coming in the future. Here’s a run-down on some of UAVs’ current agricultural uses and what may lie ahead.

Not there yet: Precision pesticide and water application
Agricultural researchers and technologists are investing significant effort into improving UAVs’ ability to apply site specific, ultra-precise pesticide and water applications. Right now, carrying capacity severely limits tank size, making this function good in theory but less than practical on a farm of any size.

However, two major improvements may be around the corner.

While the majority of UAVs flying for agricultural purposes are very small quadcopters, larger aircraft are being developed. In North Dakota, 1000 pound (lbs) UAVs with 34-foot wingspans have been tested over agricultural fields for the past 15 years. While large UAVs obviously carry greater risk, their size also opens all kinds of potential. Researchers are also making big steps forward every year in battery efficiency, flight time and carrying capacity, meaning that even smaller UAVs are gaining enhanced utility.

The second improvement relates to artificial intelligence. Currently, UAVs used for water and/or pesticide application require an operator to choose where to apply the cargo based on imagery transmitted by the UAV. But, that may soon change.

“We’re not at the point yet where the drone itself has the software to identify a pest or a problem and then choose to apply or not apply product accordingly,” says Dr. Mary Ruth McDonald, research program director in  the department of plant agriculture at the University of Guelph. “But, this is one of the areas where a lot of research is currently occurring. I think we’ll soon be at the point that a drone can fly along and say, by itself, the colour is different here so I’ll put fungicide on this patch, but this other area looks healthy so I won’t put fungicide there.”

Getting better: Pest scouting
Over the past three years, throughout the growing season, McDonald and her team have taken aerial photos of their test plots and of growers’ fields on a weekly basis. In addition to seeing patterns such as the movement of disease into a field, drone photography has revealed some less expected disease and pest findings.

“In one case, we could see that the pattern of disease development seemed to be associated with differences in soil type across the field. We speculate that plants in certain soil types were under more stress, so more susceptible. That’s a fascinating observation,” she said.

That said, pest scouting via UAVs carries two challenges. First, the window to halt a pathogen or insect is often very small, which means one’s scouting flights must occur often enough or at just the right time in order to identify the problem before it is too late. Second, though a bird’s eye view offers insight into patterns, it does not offer the hands-on, up-close view necessary to identify a problem early. As such, aerial photography must be used as an additional tool rather than a replacement of one’s boots on the ground.

These issues may soon be corrected, since today’s pest management functionality is just the tip of the iceberg, McDonald believes. Currently, most UAVs take true colour photographs, or images recorded using the visible light spectrum. True colour images can only detect pest and disease damage once leaves change colour or drop off the plant.

However, the next step is already arriving.  Some custom UAV imagery companies and researchers are using near-infrared, a type of photography that blocks most of the visible light spectrum. Near infrared images can be processed to create a Normalized Difference Vegetation Index (NDVI), which is a calculation of crop canopy covering the field. A crop stressor that slows plant growth or starts to defoliate plants can be identified by the NDVI before it is obvious visually. Some studies are even showing that NDVI data may also be useful in assessing crop maturity and harvest timing in certain crops.

Researchers hope that, in the near future, infrared imagery will be able to detect plant stress far earlier and far more specifically than is possible now. Various diseases cause unique stress signatures in the plants they attack. That finding, combined with huge advances in multi-spectral cameras, suggest that imagery captured by UAVs may soon identify individual diseases and pests from even minute changes in leaves and/or overall plant health.

“Ultra-early disease and pest detection is the holy grail. The promise is there but the technology hasn’t yet developed quite enough,” McDonald says. “There are a lot of people working on it but, so far as I know, no one has managed it, even on an experimental basis. But everyone agrees that at some point we’ll be able to do this.”

Worth the cost: Agronomic and equipment assessment
Bird’s-eye view images of the landscape below can offer all kinds of insight to producers. For the first time, UAVs give growers a snapshot of overall crop health and growth mid-season and in real time. In addition to vastly speeding up crop scouting, an aerial image provides an overview one just can’t capture when walking amongst plants.

“We see clear best management practices patterns in most fields we fly. They’re sometimes equipment related: planting depth issues causing patterns of inconsistent emergence, or inconsistent tillage tools creating streaks. We see a lot of compaction issues from growers getting on the fields at the wrong time, lines [are showing] in the field that you can follow from the beginning of the season right through to the end. And, we see a lot of patterns related to fertility spread as well, where there’s gaps or improper overlaps,” says Norm Lamothe, the head of Deveron UAS Agriculture, a custom drone service operating from B.C. to Quebec.

These patterns, Lamothe says, can be easily translated to actual dollars lost.

“A yield monitor at harvest is good, but it averages out crop yield across the whole swath, so you don’t get a true representation of what an equipment issue is costing per acre. We’ve worked out that compaction from a manure spreader can cost $24 per acre. That’s pretty specific and actionable information for a producer,” Lamothe says.

“I’ve never seen a map where we have a consistent crop across the entire field. Each factor that causes variation can be managed. If a certain part of the field is performing differently than another part of the field, there’s opportunity to go in, assess, and improve your outcomes,” Lamothe says.

The high-tech cameras on board Deveron UAS’ UAVs use a sunshine irradiance technology to calibrate each image to the ambient light.

“A plant at a certain growth stage should give you a certain light value. By analyzing those values, we can identify whether a plant is above or below where it should be at that time of year,” Lamothe says. “If a plant is under stress for any reason, whether that’s water related, disease related or whatever, the sensors will identify that there is a problem. It still requires boots on the ground to go in and figure out what the problem actually is, but the identification piece is huge.”

The efficiency with which UAVs operate means farmers can conduct multiple real-time check-ins throughout the season. Once areas of subpar or exceptional growth are identified, growers can analyze the factors that are limiting or improving growth, and then begin thinking in terms of optimizing returns via zonal adjustments to inputs, pest management and agronomic practices. In some cases, problems identified by UAV imagery can mitigated or minimized in season. In other cases, identified patterns can help producers make more informed decisions in subsequent years.

“As farms get larger and margins get smaller, farmers will have to lean more heavily on technology to achieve profitability,” Lamothe says. “There’s a growing awareness of the value of this type of data. The whole concept of operating by zone rather than by field is resonating with farmers because they need to maximize the returns they can extract from their acres.”

There are times when it makes sense to hire a drone imagery service – when mapping large acreages for variable-rate application or if you don’t yet own a drone. But, there are currently no sensors that definitively diagnose specific crop problems, so the imagery will always require further investigation on the ground. Rather than incurring the expense of a pilot, growers and agronomists may get more value from operating the drone themselves because they can use their deep knowledge of a field to interpret the drone data directly.

What laws apply to on-farm drone use?

It is crucial that everyone comply with the laws designed to keep shared airspace safe. LandView offers a two-day Ag Drone School where farmers and agronomists can gain the knowledge Transport Canada requires for commercial UAV flights. The school also offers “how to” instruction from first flight to mapping missions. Growers are able to learn how drones can give them deeper insight into their crop management decisions.