February 2, 2016 - Two types of extraction techniques have been developed by Ontario researchers at the University of Toronto that can turn tree bark into desirable liquid ingredients for products like environmentally friendly adhesives and foams.

And the technology, which is now ready for commercialization, might have application for agricultural feedstocks like crop residues, too, says project leader Dr. Ning Yan, a professor in the Faculty of Forestry and the Department of Chemical Engineering and Applied Chemistry, and Endowed Value-Added Wood and Composite Chair at U of T.

“We hope to expand the work we’ve done to develop the bark extraction techniques and the resin formulations to convert the liquefied bark into adhesives to other feedstocks,” she explains. “It could be transferrable to agriculture, whether there are biomass residues as well, not just in forestry.”

The four-year Bark Biorefinery project that just wrapped up in 2015 focused on finding higher value for forest residues that are produced in high quantities in sawmills.

Bark, for example, typically has no real value-added applications and because it is rich in many types of chemicals, it poses both fire hazards and risks to the environment.

Its chemical composition, though, is very similar to wood cellulose, lignin and hemicellulose, and it contains a family of chemicals called extractives because they can usually be easily extracted by using water.

Their goal was to remove the phenolic compounds from the bark and use them in products where they could be substituted for petroleum-based ingredients.

In addition to the extraction techniques, Yan and her team also developed technology to turn the liquefied bark extracts into bark-based phenolic adhesives, with some successful outcomes.

“We have done a lot of resin formulation work and we have benchmarked successfully to commercial products used in particle board, plywood glues, and in panel-making,” Yan explains. “If you substitute 30 per cent phenol for bark extractives, the adhesive properties are comparable to commercial adhesive products.”

Researchers at the Bark Biorefinery also developed technology that can convert bark into polyols, which are used to make rigid polyurethane foams in the automotive and construction sectors, as well as invented bark-based epoxy resin.

Of the three major chemical platforms, though, it’s the bark-based glue that is the closest to market-readiness. Yan has completed some pilot scale extraction trials with industry partners with the adhesive and is currently trying to move it into commercialization.

“Our next phase is to find companies to use this adhesive in their commercial projects so we can conduct verification of our technology in commercial environments,” she says. “We are at lab scale in most other things but have already completed some pilots with the adhesive.”

To help in the search for suitable commercialization partners, an engineering design firm has drawn up plans for what an extraction facility next to a pulp mill could look like, she adds.

The Bark Biorefinery project was supported by the Ontario Research Excellence Fund. 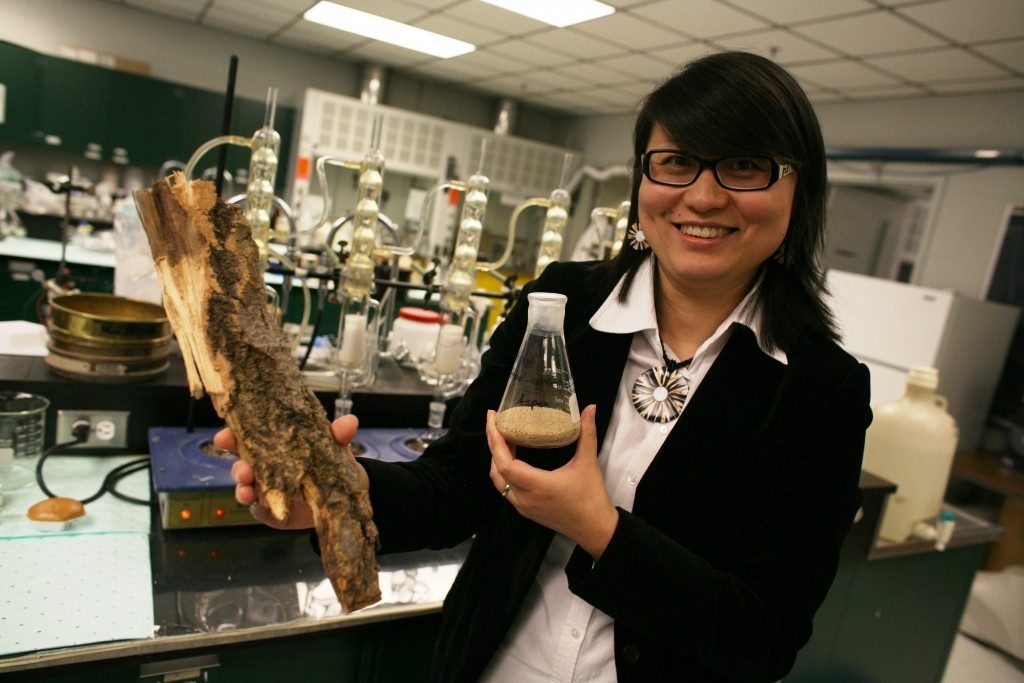 Dr. Ning Yan in her lab at U of T. Two types of extraction techniques have been developed by researchers at the University of Toronto that can turn tree bark into desirable liquid ingredients.