As fababean production ramps up on the Prairies, growers are having to contend with gaining a better understanding of production practices in the face of limited agronomic research. One area lacking research is control of pathogens that cause root rot. However, recent research by Alberta Agriculture and Forestry (AAF) and Agriculture and Agri-Food Canada (AAFC) provides some reassuring and validating results to prove that seed treatment to manage root rot of fababean is warranted.

Chang was involved in several research programs that looked at the effect of seed treatments and pathogen density on seedling blight and root rot of fababean. The results were published in the Canadian Journal of Plant Science in 2014. Chang, along with co-researchers Robert Conner and Debra McLaren with AAFC Morden and AAFC Brandon, respectively, and Sheau-Fang Hwang with CDC North, focused on root rots caused by Fusarium avenaceum and Rhizoctonia solani because surveys have shown that Fusarium and Rhizoctonia root and foot rots were major diseases of fababeans as well as many other crops including pea. The research included two parts.

The first study used isolates of F. avenaceum and R. solani obtained from symptomatic roots of fababean plants collected from a survey of commercial fields conducted in central Alberta. The pathogens were colonized on wheat grain kernels, air-dried, ground into powder and stored at 4C. The powdered inoculum was mixed and planted with the seed at 15 mL per 6 m row for R. solani or 30 mL per 6 m row for F. avenaceum and compared to a non-inoculated control. These rates were selected based on previous studies with other pulse crops.

Seed treatments included Apron Maxx, Thiram and Vitaflo 280. A Rhizobium inoculant was also applied to the seed. This trial ran at Lacombe and Vegreville, Alta.

The second study assessed the interaction of fungicide seed treatments with inoculum density of F. avenaceum and R. solani, in a total of 12 trials over three years at Lacombe, Alta., and Morden and Brandon, Man. The main plot treatments were inoculation with either F. avenaceum or R. solani at 15, 30 or 45 mL per row or a non-inoculated control. The subplots included fungicide seed treatments of Apron Maxx, Trilex, Vitaflo 280, Trilex EverGol and a non-treated control.

In the first study, F. avenaceum reduced seedling emergence more than R. solani, but both pathogens had a similar impact on seed yield, reducing it by 17 to 23 per cent. Chang says that in the treatments inoculated with F. avenaceum, Apron Maxx and Vitaflo 280 increased seedling emergence and yield compared to the non-treated inoculated control or Thiram. In the treatments inoculated with R. solani, Apron Maxx and Vitaflo 280 improved emergence compared with the non-treated control and Thiram, but only application of Apron Maxx increased yield.

In the second study at three sites with six station years, Chang explains the interaction effects of inoculum density x seed treatment for F. avenaceum and R. solani were only significant for seed yield, and indicated significant effects on root rot severity and seedling emergence. “Seedling emergence and seed yield declined with increasing inoculum level for both F. avenaceum and R. solani,” he says. Nodulation was not affected by inoculum density, reports Chang.

While seed treatments can be effective in helping to control the pathogens, Chang also notes that keeping inoculum levels low in the field with good crop rotations should be a priority as well. He says root rot pathogens such as F. avenaceum have thick-walled chlamydospores that can last several years in the soil so rotation to non-host crops can help, especially away from field pea and other pulses. However, because F. avenaceum and R. solani are common pathogens in so many crops, seed treatments will likely become a required input for high yields and improved economic returns in fababean. 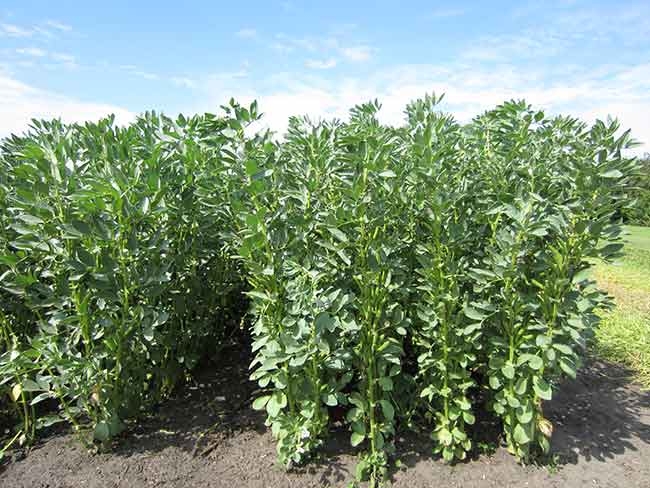 Healthy fababean plants.  As fababean production ramps up on the Prairies
Print this page