Rust is one of the issues targeted in a major project to advance disease management in fall rye. Not only is this project breaking new ground by breeding for rust resistance in western Canadian rye cultivars, but the research could also help shed light on some of the basics about this little-studied disease problem on the Prairies. 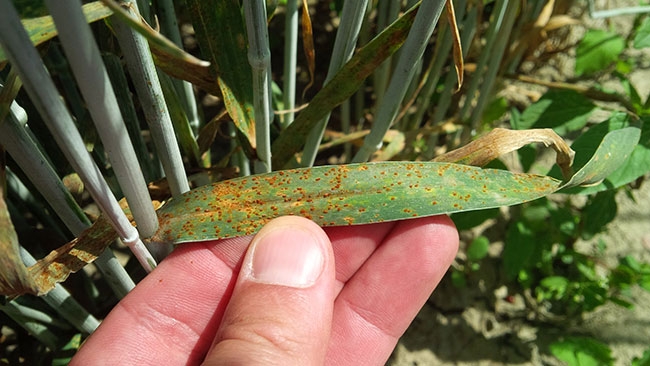 Leaf rust on rye occurs almost every year at Lethbridge and in some years it can be severe. Rust is one of the issues targeted in a major project to advance disease management in fall rye.

“We have observed leaf rust on rye almost every year here in Lethbridge. Some years it can be very severe and other years you just see a little bit. We don’t typically see a lot of leaf rust in wheat in the Lethbridge area, so I was surprised to see it on rye because one of rye’s hallmarks is that it is pretty resistant to a lot of problems,” says Jamie Larsen with Agriculture and Agri-Food Canada (AAFC), the project’s lead researcher.

He adds, “I’ve seen the disease at many other locations – Alberta, Saskatchewan and Manitoba all have some level of leaf rust on rye. But it is not talked about very much in Canada, although in Europe they have worked on the disease and they are concerned about it.”

“We really don’t have a lot of information on diseases in [Canadian] rye, other than ergot. Most other diseases that we would normally monitor in other cereals are not being monitored in rye, and one of those diseases is rust,” notes Anita Brûlé-Babel with the University of Manitoba, who is collaborating with Larsen on the project.

However, change is on the horizon. The arrival of high-yielding rye hybrids on the Prairies is sparking new interest in rye among growers and researchers, including an interest in increasing productivity through improved disease management. In addition to rust, the project also involves work on Fusarium head blight and ergot. Funders for the project are Saskatchewan’s Agriculture Development Fund, Western Grains Research Foundation, Western Winter Wheat Initiative, Saskatchewan Winter Cereals Development Commission, FP Genetics, KWS and Bayer CropScience.

Brûlé-Babel’s group runs stem rust and leaf rust disease nurseries in Winnipeg for her winter wheat breeding program. So when she and Larsen were developing their plans for this project, they saw a great opportunity to test rye lines in both Lethbridge and Winnipeg to look for sources of rust resistance genes.

The researchers are evaluating about 75 fall rye lines at both locations. These lines include historical and current Canadian materials, and materials from other countries, including the United States, Germany and Russia. There are also lines from Larsen’s open-pollinated rye breeding program and from KWS, the German crop breeding company that has developed the hybrid ryes now available in Western Canada.

This rust testing will help the breeders in selecting material for their programs and it will provide rust ratings for current Canadian rye cultivars to help growers in choosing rye varieties.

In Brûlé-Babel’s rust nurseries, they inoculate the plants with rust pathogens to assess the disease reaction. Using inoculation ensures the lines will be exposed to significant rust inoculum levels every year; sometimes the timing of natural infections and the maturity of the different lines have a lot to do with how serious the infection becomes.

So in 2017, the project’s first year, Brûlé-Babel’s group relied on natural rust infections in the rye lines. Both leaf rust and stem rust occurred in plots at Winnipeg and Carman, Man. Some lines were definitely more susceptible than others.

Duoduo Wang, who is Brûlé-Babel’s graduate student working on the project, collected spores from the susceptible materials, and grew rye leaf rust inoculum and rye stem rust inoculum. Single spore isolates were developed, and the final inoculum that will be used will contain a mixture of different isolates in case several races of the pathogen occur in the area.

Brûlé-Babel’s group will be inoculating the rye lines starting in 2018. The inoculations will be done when the air temperatures in the spring reach at least 10 C at night so the conditions will be warm enough for the spores to germinate and infect the plants.

In the Lethbridge area, leaf rust is the only rust issue on rye. “We’ve never seen stem rust on rye in Lethbridge. We’ve only seen stripe rust once [and that was under extremely unusual conditions],” Larsen explains. “Rye is pretty resistant to stripe rust.”

Larsen’s leaf rust nursery relies on natural infection, although his group irrigates the plots to provide a good environment for the disease if it is present in the area. Rye leaf rust typically comes into the Lethbridge area in late June or July, well after flowering.

Leaf rust on rye occurs almost every year at Lethbridge and in some years it can be severe.

Larsen is seeing a wide range of responses to leaf rust in his nursery, from resistant or moderately resistant all the way to susceptible. He notes, “We’ve seen some lines from the U.S. having some leaf rust resistance. Those lines are from the southern U.S. – Georgia, Florida and Oklahoma – and many of those lines are used for forage. If rye is going to be used for pasture, silage or hay, it has to have disease-free leaves. So they put a high emphasis on selecting for rust resistance. That resistance appears to translate up here, but when we make crosses and select for rust resistance, we have to also make sure they are cold-tolerant enough for our conditions.”

One question the researchers would like to answer is whether the rust races are different at Lethbridge and Winnipeg. Leaf rust and stem rust are blown into the Prairies from other regions, and Lethbridge and Winnipeg may be getting rust spores from different source regions. The Winnipeg area’s spores are brought in on the “Puccinia Pathway” from Mexico and Texas through the central U.S. and into Manitoba and Saskatchewan. Although it’s not yet known for sure, the Lethbridge area may get some or most of its leaf rust spores from the U.S. Pacific Northwest. “So we are curious whether the rust resistance genes will be effective all the way across western Canada, or if there will be some regional differences,” Larsen says.

Brûlé-Babel notes, “Because we are growing the same rye lines here and at Lethbridge, if we see differences in how the different lines respond to the rusts in the two different areas that will give us a clue as to whether those rust races are similar or not.”

The project could also help provide a better understanding around another fundamental question: how serious a problem is rust going to be in Prairie rye crops?

“When breeders started working on winter wheat for Western Canada, they used to say, ‘We don’t need to worry about leaf and stem rust in winter wheat because the crop matures too early before the epidemics get moving. So it is not going to cause yield losses.’ Well, we had a massive rust epidemic in winter wheat in 1986, proving them completely wrong,” she notes. “It was a stem rust epidemic, and stem rust is absolutely devastating to a crop; if it comes in early enough, you are usually looking at 50 per cent yield losses or more. And what you harvest is usually not saleable because the seeds are very shrivelled so even the feed industry may not want it.”

Since fall rye and winter wheat mature at similar times, perhaps rust damage in rye might be minor in most years. But Larsen has already seen some fairly serious outbreaks of leaf rust at Lethbridge. And in years when the rust season starts earlier than usual in Mexico and the southern United States, perhaps rye crops in Manitoba and Saskatchewan might have some significant rust problems where conditions favour the disease.

Brûlé-Babel says, “It is really important to look into these basics so we don’t have wrecks [like the winter wheat rust epidemic in 1986]. If growers have bad experiences with a crop, they drop it. Rye is emerging with renewed interest and I would hate to see it hit a stumbling block.”