An ambitious goal in the effort to improve how we feed crop plants. 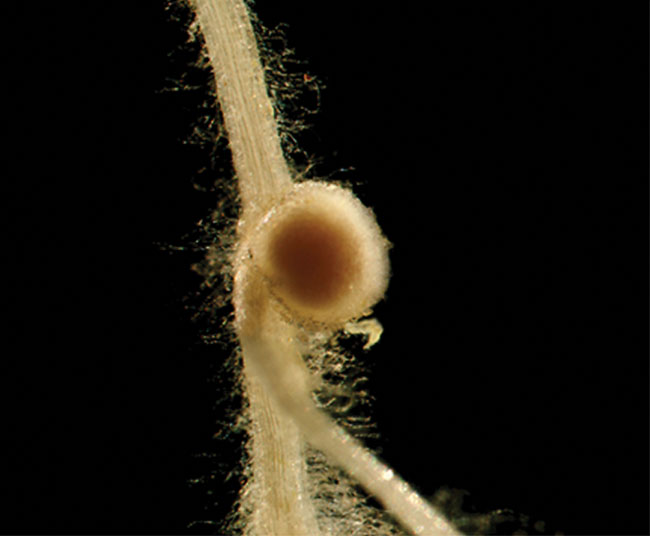 A nitrogen-fixing nodule on a legume. Photo courtesy of Krzysztof Szczyglowski.

To make big strides, science has to be ambitious. We have to aim for something that is really a game-changer,” says Krzysztof Szczyglowski, a research scientist with Agriculture and Agri-Food Canada in London, Ont.

Szczyglowski’s research targets the game-changing goal of nitrogen fixation in cereals. He and other researchers around the globe are working towards this complex challenge.

“In my mind, ‘nitrogen-fixing cereals’ is an umbrella term that covers a broad range of research activities. As a consortium of scientists, what we really want is to improve how we feed our crop plants,” he says, highlighting a few of the diverse research activities under this umbrella, including research on nitrogen nutrition in legumes and nitrogen-fixing microbes that live in the soil outside of plant roots. His own research revolves around the symbiotic process of nitrogen fixation between legume plants and nitrogen-fixing rhizobial bacteria. In this process, the host legume plant and the rhizobia communicate using a chemical language. The plant initiates the process by releasing certain chemical compounds from its roots into the soil. If a compatible rhizobial species is present in the soil around the roots, it will signal back to the plant. That starts a back-and-forth dialogue between the plant and the rhizobia, which unlocks the door to the root’s interior so the rhizobia can enter, and stimulates the plant to modify its root growth to build root nodules.

Rhizobia have an enzyme called nitrogenase that is able to convert atmospheric nitrogen into ammonia, a form of nitrogen that plants can use. The rhizobia provide ammonia to the plant to support the plant’s growth and development. In return, the plant provides carbon to the rhizobia for their growth.

The root nodule is crucial to this process because the nodule protects the nitrogenase from oxygen, which can damage the enzyme.

For about three decades, Szczyglowski and his research group have been investigating symbiotic nitrogen fixation. In particular, they have been looking into the key elements involved in this process, mainly from the plant side of the symbiotic relationship.

Over the years, his group has directly discovered or contributed to the discovery of a number of the individual elements in the nitrogen-fixation process. “We uncovered several key plant receptor molecules that respond to the signalling from the bacteria and that mediate this process. They initiate this process and then allow the plant to proceed in building the root nodules,” Szczyglowski says.

Even more important, his group has contributed to the major discovery that most of the genetic machinery needed for nitrogen fixation is already present in non-legume plants, including crop plants like wheat and corn. He explains non-legume plants use this machinery for symbiotic interactions with another group of beneficial microbes called arbuscular mycorrhizal fungi. “The primary purpose of this symbiosis between plants and these soil fungi is to scavenge for phosphate, another growth-mediating nutrient.”

One of the recent research questions that Szczyglowski’s group has been helping to answer is: Why can legumes build root nodules but other plants can’t?

“In 2007, we published a paper in Science describing a cytokinin receptor that is the key to the nodulation process. Legume plants use this receptor and recognition of cytokinin, which is a common plant hormone, to build root nodules. That discovery was important because it emphasized what was being learned from all of the other angles of the research: that legume plants use common signalling molecules, present also in non-legumes, to build nodules.”

Since most plants have cytokinin receptors, Szczyglowski’s research group hypothesized that legumes have a different sensitivity to this signalling molecule than non-legumes. Several research groups looked into this possibility, and an Australian group recently showed that the hypothesis is correct.

He finds the possibility of such an advance really exciting. “It will not solve all of our challenges, but it is certainly going to move us closer to the goal [of developing nitrogen-fixing cereal varieties].”

Another question his research group is currently pursuing is: How is the root-localized process of nitrogen-fixing symbiosis integrated on a whole-plant level? This whole-plant integration is essential so the plant can use the ammonia from nitrogen fixation to increase its productivity. “Several years ago, we discovered one of those integrators. It is another receptor, which we called Hypernodulated Aberrant Root Formation. This rather esoteric name reflects what the integrator does: it regulates the number of nodules that form and the root architecture,” he notes. “Root architecture is a very important crop trait in terms of scavenging for nutrients because plants regulate root plasticity [which enables the roots to respond to changing conditions in their environment].”

Szczyglowski explains that this integrator is able to receive information about the soil nutrients, the soil microbial community and the plant’s root growth, and integrates all that information for the best possible outcome for the plant. “We are now trying to understand how this integrator works. To do that, we are looking at natural variations [in this integrator] and also creating new, synthetic variants to see how the differences affect plant growth and how they correlate with plant nutrition and yield.

Research on nitrogen-fixing cereals is just one of many ways this nitrogen problem is being tackled. Other strategies include improved management of crop nutrient inputs, improved fertilizer formulations, next generation microbial amendments, and development of crop varieties with better nitrogen uptake and use. “All of these activities contribute to the goal of increasing crop productivity while sustaining our environment. Some advances are either being implemented right now or will be deployed in the relatively short term. This is important because we need improvement right away.”

However, he emphasizes even with these improvements, the nitrogen problem is not solved. Ongoing, longer-term research is needed, including breeding to develop crop varieties that can perform well with much lower inputs.

“The ultimate goal of having crop plants that fix their own nitrogen is not a short-term goal. If it is feasible – and I believe it is – it will be a long-term effort. We are living in an age of acceleration in terms of technological advances and innovation. To me as a scientist, that means that all these goals could happen sooner rather than later, with continuing support for fundamental research.”