Assessing cropping systems in the Maritimes to enhance soil productivity and resiliency. 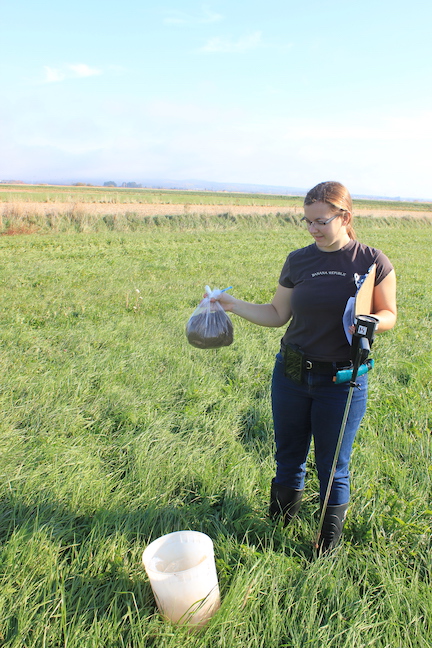 The project is collecting samples for soil health assessment from across the Maritimes’ diverse cropping systems, including this forage field.

An ambitious project is providing comprehensive information on soil physical, biological and chemical properties for agricultural producers in Nova Scotia and Prince Edward Island, and developing tools to help these producers make more informed decisions on how to enhance their soil health and productivity.

“Producers have always been interested in their soil health,” notes Derek Lynch of Dalhousie University who is co-leading this project with his colleague David Burton. “There is a lot of interest in this project and the development of a regionally relevant soil health framework and tools.”

Lynch explains that, across North America, agricultural scientists and others are using soil health frameworks for monitoring and measuring the effects of different practices on soil properties. That’s because soil health is such a crucial issue – for agriculture, for rural landscapes and for climate change. Healthy soils perform vital functions like nutrient retention and cycling, water infiltration and storage, and suppression of crop diseases, weeds and insect pests. These functions not only support healthier crops, but also enable the landscape to better tolerate extreme weather conditions and help reduce greenhouse gas emissions.

However, soil health frameworks aren’t one-size-fits-all. For instance, the priority of particular soil health issues tends to vary from region to region. In one region, soil compaction might be the most pressing concern. In another region, it might be soil-borne crop diseases. In yet another, it might be low soil nutrient levels.

So Lynch and Burton are working to develop a soil health framework that is specific to P.E.I. and Nova Scotia.

“In some ways, the Atlantic region is particularly prone to risks of soil quality degradation because of the combination of shallow, coarse-textured soils and sloped land,” Lynch says. “As well, some agricultural sectors here have fairly intensive production. These intensive systems are part of an overall trend across eastern Canada of having fewer acres in forage and pasture production, and more acres in short rotations and low-residue crops. Potato production is a classic example in the Maritimes but it isn’t the only example.”

The project, which runs from 2016 to 2021, aims to assess the effects of different cropping systems, management practices and soil types on soil health, soil carbon storage capacity, and soil nitrogen supply. The project is collecting soil health data from farm fields and research plots across the region, analyzing the samples, building a database, and conducting multiple studies that are approaching soil health considerations from different angles.

“Soil health, soil carbon storage capacity, and soil nitrogen supply are closely related to each other. But some project aspects are primarily focused on soil carbon, which I’m leading, and some aspects are primarily focused on soil nitrogen supply, which Dr. Burton is leading. Soil health is the umbrella that links the two,” Lynch explains.

He highlights a few examples of the project’s studies. “With soil carbon, for example, we’re looking at existing models that say the potential for soil carbon storage is enhanced as silt and clay content goes up, and we’re asking: do those models apply to our primarily coarse-textured soils? Or is the potential for soil carbon storage in this region much more driven by dynamic properties [which are affected by agricultural practices] rather than inherent properties [like soil texture]?

“Another example of what we’re looking at is: how low can we go with soil carbon? Soil carbon is declining in certain cropping sectors here, so is there a tipping point below which we get a wider impact on soil health?

The project will develop tools to answer growers’ questions like: would adding soybeans to my rotation add enough residue to enhance my soil’s health? Photo courtesy of Derek Lynch.

“On soil nitrogen supply, we’re looking at whether we can come up with a better understanding of what drives seasonal nitrogen supply from soils in the region. If we could do that, that would really be a breakthrough because then you could adjust fertilizer nitrogen recommendations and develop a decision support tool for producers.”

The project team is using the Cornell Soil Health Assessment Framework as a starting point, adjusting that framework’s sampling and analysis procedures to meet the region’s needs. The team is using about a dozen different soil health parameters, which provide a comprehensive evaluation of soil physical, biological and nutrient/chemical properties.

“Our aim is to develop a database using those comprehensive tests across different agricultural sectors, different farms, and different research plots in Nova Scotia and P.E.I.,” Lynch explains.

So, samples are being collected from across the region’s diverse cropping systems. He says, “In Atlantic Canada, we have everything from intensive vegetable and potato production, to grain production, to low-bush blueberry and vineyards, to forages and pasture.”

As well, the sampling locations include sites with conventional production practices and sites where beneficial management practices (BMPs), like cover crops and no-till, are used. Lynch says, “We don’t want to just look at where we are at currently in terms of soil health. We also want to look at the effects of BMPs and which soil health parameter may respond to a specific BMP.”

The number of sampling sites varies from year to year. Over the past three field seasons, the project team has collected over 1300 samples.

The samples are analyzed at the Atlantic Soil Health Lab. This unique research lab was launched at Dalhousie University in 2017 as part of the project. Each sample’s soil data and field history data are entered into the database, resulting in a powerful resource for soil health research and tool development.

The project team shares the key findings with the participating producers. “We provide the data for their own field, and we present that data relative to their peer group, so a vegetable producer’s data is compared with the average for all the vegetable producers in the region, and relative to the average for all types of cropping systems in the region,” Lynch says.

He adds, “Some of these parameters, like water stable aggregation and soil respiration, are new to producers. So we explain how the parameters are measured and what they mean.”

Some initial findings and next steps

“The data we have collected so far supports some previous research in the region showing that, in some cropping systems, soil organic matter is low and declining. On the majority of fields, it is less than three per cent and often significantly lower than that particularly for more intensive, low-residue cropping systems like potato and intensive vegetable production,” Lynch notes.

“We are also finding that as the frequency of those intensive, low-residue crops in the rotation goes up to 20 or 30 per cent or more, the organic matter levels and many of the other soil health parameters – such as soil aggregate stability, soil respiration, and nitrogen supplying ability – tend to be declining. Grain cropping systems tend to be intermediate. And as pastures and forages are more frequent in the rotation, the soil health parameters tend to increase.”

In 2019, the project team will be continuing the soil sampling, lab analyses, database development, and information sharing with producers. And they will continue their soil health studies, such as the work on a soil carbon tipping point and regional drivers for soil carbon storage and soil nitrogen supply, as well as various other studies.

For example, some of the research is identifying which particular soil health parameters are the most meaningful, sensitive and robust measurements for P.E.I. and Nova Scotia conditions. That information could allow the researchers to obtain regionally relevant data with fewer types of measurements. A related study is taking a detailed look at the different fractions of active soil carbon (as opposed to stored soil carbon) and seeing how well each fraction might correlate with improvements in soil health. Some upcoming research, to be conducted once sufficient fields with different BMPs are sampled, will aim to identify which specific BMPs offer the greatest soil health benefits. In addition, the project’s database will be supporting tool development and other activities by PEIDAF and Perennia.

The project team will be starting a new study in 2019 to determine which cropping options tend to provide a net addition of soil organic matter and which ones tend to deplete it. This study’s goal is to develop a tool to help producers in making decisions about changes to their rotations. Lynch explains, “For example, if I lengthen my rotation by adding this grain crop, what is the net change in the organic matter level? Or if I grow soybeans instead of potatoes, as is happening quite widely in the region, will the soybeans provide sufficient residue to tip the balance towards a net enhancement of soil organic matter and soil health?”

Although improving soil health and productivity in the Atlantic region presents significant challenges, especially in intensive, low-residue crop production systems, the project’s findings and tools will provide practical information for producers. And Lynch notes, “Producers are very innovative in fine-tuning their cropping systems.”