March 15, 2013 – Research on applying liquid livestock manure as a spring top-dress fertilizer to wheat has been ongoing in Ohio for several years. There is usually a window of time, typically around the last week of March or first week of April, when wheat fields are growing and firm enough to support manure application equipment.

The key to applying the correct amount of manure to fertilize wheat is to know the manure’s nitrogen content. Most manure tests reveal total nitrogen, ammonia nitrogen and organic nitrogen amounts. The ammonia nitrogen portion is readily available for plant growth. The organic nitrogen portion takes considerably longer to mineralize and generally will not be available when wheat uptakes the majority of its nitrogen in the months of April and May.

To capture the most nutrients from manure farmers should consider incorporation. Incorporation can result in less nitrogen loss and can especially reduce the loss of dissolved reactive phosphorus.

Three years of on-farm wheat top-dress results are summarized in Table 1. Each field trial was replicated four times. In each plot, the manure ammonia nitrogen application rate was similar to the nitrogen amount in the urea fertilizer – typically about 100 pounds per acre. The manure was applied using a 4,800-gallon tanker with a Peecon toolbar 13.5 feet in width. This toolbar cuts the soil surface with a straight coulter and a boot applies the manure over the soil opening. Urea was applied using a standard fertilizer applicator.

*Incorporation was performed with a modified Peecan toolbar attached to a 4,800-gallon tanker

In addition to the Peecon toolbar, OSU Extension as also conducted manure research on wheat using the both the Veenhuizen toolbar and Aerway toolbar. All toolbars cutting through the soil cause some disruption to the growing wheat but side-by-side yield comparisons with convention surface applied fertilizer have rarely shown any difference in yields.

Some Ohio commercial dragline operators are routinely applying livestock manure to wheat each spring. This practice is gaining acceptance as it’s faster and more efficient than manure application with a tanker. The risk of soil compaction is also reduced.

Additional on-farm manure top-dress of wheat plot results can be obtained by clicking on the on-farm research link on the OSU Extension Agronomics Crops team website. 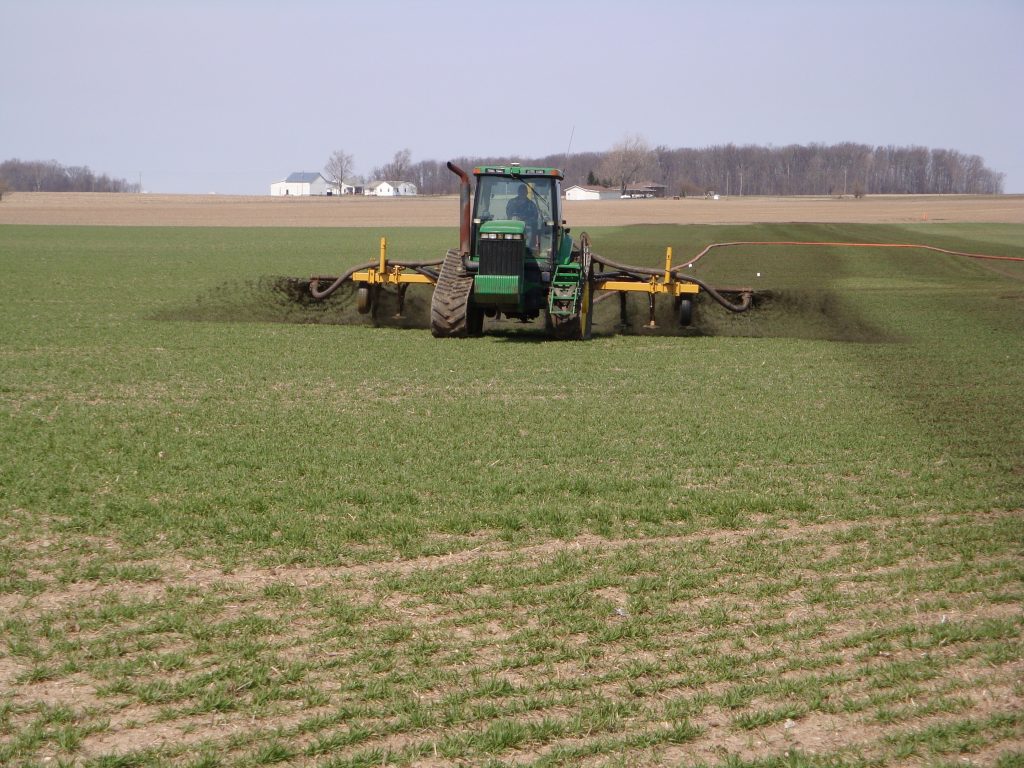 Research on applying liquid livestock manure as a spring top-dress fertilizer to wheat has been ongoing in Ohio for several years.